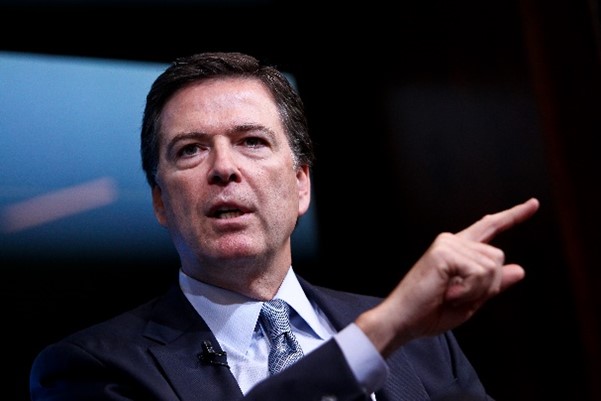 And the ousted James Comey was getting ready to deliberately bend the rules. In the words of another critical report from the IG, the recently fired FBI director “improperly disclosed FBI documents and information” to the New York Times. Credit: Brookings Institution. License: https://bit.ly/3p7Wdmc.
by Ken Braun

One those reform eras should have begun after the December 2019 report from the Justice Department Inspector General shredded the Bureau’s behavior during the Trump-Russia collusion hoax. That has not happened.

As previously noted, most Americans still believed the hoax as recently as seven months before the 2020 election, and the fable has altered our politics for the worse. Much of the fault lies with the FBI’s credulous treatment of the Steele dossier and careless FISA spying.

Days after the IG report was released, the Washington Post gave Comey space on its opinion page to respond. The former director had just read that he and his team were guilty of “extensive compliance failures” that put the civil liberties of Americans at risk and that “three separate, hand-picked teams, on one of the most sensitive FBI investigations” committed “many basic and fundamental errors” in the FISA process.

Instead, Comey declared victory and demanded atonement from others: “The FBI fulfilled its mission—protecting the American people and upholding the U.S. Constitution. Now those who attacked the FBI for two years should admit they were wrong.”

He spent exactly one paragraph of 13 answering for the abuses in the FISA applications, the IG report’s titular concern (literally, the title of the report is Review of Four FISA Applications and Other Aspects of the FBI s Crossfire Hurricane Investigation).

Comey brushed off the FISA concern as just routine error:

[N]ot surprisingly, the inspector general found mistakes, 17 of them, things the FBI should have done differently, or better. That’s always unfortunate, but human beings make mistakes.

Six of 13 paragraphs, half the essay, were defenses of Comey’s reputation and attacks on former Attorney General William “Bill” Barr or Trump.

And the big takeaway, he wrote, was this:

But most important, Horowitz’s report found that the investigation was opened and conducted according to the rules, finding no “evidence that political bias or improper motivation influenced [the] decision” to start it or how to run it.

What the IG report really said of how the probe was run was this:

We also found the quantity of omissions and inaccuracies in the applications and the obvious errors in the Woods Procedures deeply concerning. Although we did not find documentary or testimonial evidence of intentional misconduct on the part of the case agents who assisted in preparing the applications, or the agents and supervisors who performed the Woods Procedures, we also did not receive satisfactory explanations for the errors or missing information.

A non-lawyerly version might read like this: It is deeply concerning that once these bozos got rolling, they repeatedly gave awful information to swindle warrants out of the FISA judge, and while we couldn’t find concrete proof that they did it on purpose, they also didn’t give us a reasonable alternative explanation.

Two weeks before the 2016 presidential inauguration Comey met Trump for the first time and briefed him on the most salacious rumor in the Steele dossier—that Russian intelligence had video of Trump cavorting with prostitutes. Trump strongly denied the outlandish tale.

Unsurprisingly, the very peculiar details of this first-ever meeting with the FBI director were top of mind a few days later when Buzzfeed published the Steele dossier and the whole world heard the hooker rumor. But Comey wrote that he considered a follow up call from Trump on the topic as somehow outrageous: “I stared out at the monuments and wondered what had happened to me and our country that the FBI director was talking about this with our incoming president.”

Well, Jimmy, it was you who brought it up, what did you expect?

As the media seized tenaciously on the dossier in early 2017, Comey claimed Trump raised the prostitute rumor in other discussions and even asked Comey if the FBI could investigate it to disprove it. Referencing one incident, Comey implies this was due to a guilty conscience: “I’m almost certain the president is unfamiliar with the proverb ‘The wicked flee when no man pursueth.’”

Not mentioned in Comey’s narrative was that he was feigning mystification at Trump’s concern over the prostitute story. He had already approved a FISA warrant targeting Carter Page that had used the Steele dossier reports as justification.

Neither Carter Page nor references to him appear in Comey’s memoir.

In his December 2019 essay analyzing the IG report, the former FBI director doesn’t mention the Steele dossier at all and the “central and essential role” the IG said it played in starting the FISA process targeting Page. Of Page, Comey writes only:

The investigation included electronic surveillance of one person, Carter Page, a former Trump campaign adviser with a long relationship with Russia and a history of contacts with Russian intelligence. The surveillance began with a court order shortly before the election. The order was renewed three times by federal judges. And the FBI kept it secret. Nothing was leaked to damage the Trump campaign.

With the IG report giving him the gift of perfect hindsight, Comey still mentioned only the Russian intelligence figures and left out that Page was a confirmed “operational source” giving information to the CIA regarding those very people. The IG criticized the FBI for repeatedly making this same mistake in the FISA applications.

It’s no longer a mistake when you’ve been specifically warned. It’s a lie.

But unlike most of the FBI’s scandals, it’s a lie Comey has been encouraged to maintain, and not just in his mendacious December 2019 essay for the Post.

His 2018 memoir was a #1 bestseller, so much so that he wrote another book (released in January 2021) with a similarly sanctimonious title: Saving Justice: Truth, Transparency, and Trust.

Showtime turned his first book into The Comey Rule, a two-part miniseries starring Jeff Daniels as Comey. It was released in September 2020, not subtly coinciding with the presidential election, and it set viewership records for the network.

There were no splashy TV dramas for the IG’s report.

In Higher Loyalty, Comey states that he kept on his desk at the FBI a copy of the 1963 memo from J. Edgar Hoover to Robert Kennedy, signed by Kennedy, that authorized FBI surveillance of Martin Luther King Jr.

This was one of the most infamous abuses committed by Hoover’s FBI. At one point a blackmail letter was sent to King by the Bureau that encouraged him to kill himself. Comey portrayed this in his memoir as a “legitimate counterintelligence mission against Communist infiltration of our government” that became an “unchecked, vicious campaign of harassment.”

Comey wrote that he kept a copy of the 1963 memo on his desk as a moral guidepost because the desk is where he “reviewed applications by the FBI and the Department of Justice to conduct national security electronic surveillance in the United States.”

In the next installment, the FBI has had too many “bad apples” for a government agency that wields so much power.