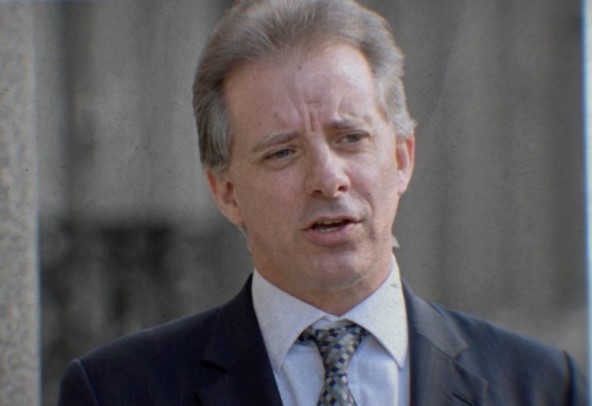 (Christopher Steele) Seven months before the presidential election, 53 percent answered that the “Steele dossier was real.” The dirty dossier had already been exposed as a ludicrous partisan hoax. But with the help of the FBI, the ruse worked, paralyzed the White House, and imperiled the safety of the nation. Credit: Coda Story. License: https://bit.ly/3SEvfAo.
by Ken Braun

The Inspector General found the omission of this information to be “among the most serious” errors in the FISA renewals. While the investigation did not reveal “evidence of intentional misconduct,” the IG observed that “we also did not receive satisfactory explanations for the errors or missing information.”

In truth, the highest levels of the FBI had something of a love affair with the Steele canard.

According to the IG, “the FBI believed the information in Steele’s reports to be credible” and “disseminated” his work to the other branches of U.S. intelligence. The FBI leadership—including then-FBI Director James Comey—wanted Steele’s stories included in the main body of the January 2017 Intelligence Community Assessment of Russian election interference.

But the CIA saw through Steele. The IG found that CIA analysts swiftly concluded the Steele dossier was full of internet rumors and didn’t want Steele dossier material befouling the main narrative in the Intelligence Community Assessment that would be sent to President Barack Obama.

The CIA prevailed, and the Steele information was relegated to an appendix of the report. But victory occurred despite strident objections from senior FBI staff, including FBI Director James Comey and his deputy, Andrew McCabe.

In a late December 2016 memo regarding the controversy sent to the Office of the Director of National Intelligence, McCabe wrote: “We oppose CIA’s current plan to include it as an appendix; there are a number of reasons why I feel strongly that it needs to appear in some fashion in the main body of the reporting.”

One FBI analyst sent a warning memo: “The minute we put the [Steele election reporting] in there, it goes from what you would expect the FBI to be collecting in a counterintelligence context to direct allegations about collusion with the Trump campaign.”

On the same day he fired Comey in May 2017, President Trump met with McCabe, who had been promoted to the Bureau’s acting director.

The following day, McCabe said he “met with the team investigating the Russia cases, and I asked the team to go back and conduct an assessment to determine where are we with these efforts and what steps do we need to take going forward.” He said his goal was to put the Trump-Russia collusion investigation on “absolutely solid ground in an indelible fashion” so that it would be more difficult to shut down.

And the ousted Comey was getting ready to deliberately bend the rules. In the words of another critical report from the IG, the recently fired FBI director “improperly disclosed FBI documents and information” to the New York Times. Comey said the objective of the leak was to pressure the Justice Department into appointing a special counsel to investigate Trump.

In his memoir A Higher Loyalty: Truth, Lies and Leadership, published a year after his dismissal, Comey unironically recounts a private discussion with Trump in which FBI leaks were the topic: “I don’t do sneaky things, I told him. I don’t leak.” Elsewhere in the memoir he writes this: “The stuff that gets me the most is the claim that I am in love with my own righteousness, my own virtue.”

The IG concluded that Comey’s leaky behavior had set “a dangerous example for the over 35,000 current FBI employees.”

But Comey and McCabe got their indestructible and damaging special counsel investigation. Mission accomplished.

Otherwise, Christopher Steele, their favorite Russian novelist, was exposed as a partisan hack working on the Clinton campaign payroll. Their FISA warrants against Carter Page tarnished the FBI as a grossly incompetent menace to civil liberties. And President Trump, while admittedly mangling the precise facts and engaging in his typical hyperbole, was vaguely accurate with his claim that the FBI had been “spying on my campaign.”

Yes, as is frequently asserted by corporate media and Trump critics, Page had technically ended his role as an advisor sometime prior to the FBI snooping. On this tiniest of technicalities hangs the credibility of the assertion that the FBI didn’t spy on the campaign.

At best, gullibility and indifference to the Bill of Rights turned the Bureau into a partisan propaganda organ that paralyzed American politics for years. At worst, this mission may have been done with malicious intent.

America’s top lawmen had accomplished pro bono the damage they claimed to be investigating.

The Federal Bureau of False Accusations

This was far from the first time the FBI harassed innocent as targets of terrorism probes.

In July 1996 Eric Rudolph killed one and injured more than 100 by setting off a bomb at Atlanta’s Centennial Olympic Park during an event connected to the Summer Olympics. Through 1998 he set off two more bombs, inflicting additional injuries and killing a police officer. He was captured in 2003.

The pursuit and capture of Rudolph rates seven separate pages on the FBI’s online history of its most famous cases. But to find the name “Richard Jewell” a reader must navigate to a small statement on the history of the FBI’s Atlanta field office:

Richard Jewell, a security guard, had noticed a backpack left unattended and had started to move people out of the area. Still, several people were hurt and one died as the bomb exploded. The resulting investigation was swift and exhaustive but failed to identify the person behind the bombing. Jewel [sic]—an early suspect—was cleared, but the media frenzy kept his name in the news.

Honesty should have compelled the FBI to credit Jewell as a hero who saved lives in those moments before the bomb exploded. The media initially and justifiably found the “Jewell is a hero” story irresistible. 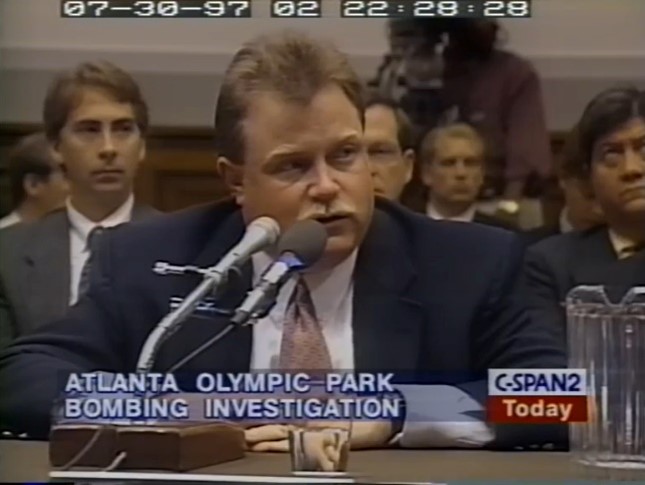 But to find the name “Richard Jewell” a reader must navigate to a small statement on the history of the FBI’s Atlanta field office. Credit: C-SPAN. License: https://bit.ly/3PkU95e.

But when the FBI turned on Jewell, so did the press. In 2019, Clint Eastwood released a film telling the tale of Jewell’s ordeal, leading the New York Times to recount how the “media frenzy” got going:

Jewell’s life turned upside down after The Journal named him as the focus of the F.B.I.’s investigation. . . .

Government officials and news organizations descended on the apartment Jewell shared with his mother. Dozens of F.B.I. agents scoured the home and towed away Jewell’s truck. In an apartment complex overlooking his building, four stations—ABC, CBS, CNN and NBC—paid a tenant $1,000 a day to set up a command post in her unit.

Yet he was never charged. Inside, Jewell watched TV. He read. He played video games. He couldn’t go outside—not without setting off a high-speed car chase of government vehicles and media vans, anyway.

Thus was the FBI’s supposedly “swift and exhaustive” investigation.

A 1997 Department of Justice investigation recounted the deceitful and inept pursuit of the wrong man and concluded the FBI had engaged in “constitutionally suspect” behavior and committed “a major error in judgment” in its handling of Jewell.

FBI agents serially lied to Jewell to get him to start talking. They told him their interrogation was part of a training video to instruct “first responders” at crime scenes.

Initially the Bureau did not even advise Jewell of his constitutional rights. After directly ordered to do so, the agents told him his Miranda warning was merely part of the playacting for the supposed training video. America’s cops didn’t tell the innocent hero that he was being legitimately interrogated in connection with the murder and mayhem he tried to prevent, and they insincerely advised him of his basic civil rights.

Two FBI agents received five-day unpaid suspensions because of their treatment of Jewell. They were back on the job well before yet another infamous targeting of the wrong man in a major terrorism case.

In the next installment, serious deficiencies in FBI investigations harmed innocent people.