The FBI’s Bad Apples: The Bureau’s Worst Days Are Worth Remembering 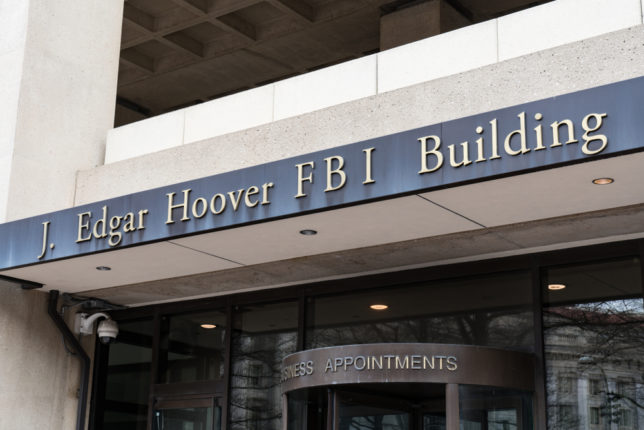 Summary: For most of the 20th century the FBI has owned the reputation of being America’s police force. The list of the FBI’s “good apple” accomplishments includes crippling Soviet espionage during the Cold War, putting mob bosses in prison, busting thieving politicians, and capturing terrorists. They are doing important work every day. But the FBI has also been deeply involved in many recent abuses of power that recall the days of Director J. Edgar Hoover, when the FBI was serially perverted into a domestic political weapon.

For most of the 20th century the FBI has owned the reputation of being America’s police force. Flexing this prestige, the Bureau has exerted influence far beyond crime policy—influence that digs deep into politics and is inseparable from the nation’s cultural identity.

Too much of the influence fits the punchline to a Chris Rock joke about police misconduct:

I know it’s hard being a cop. . . . But some jobs can’t have bad apples. Some jobs, everybody gotta be good. Like, pilots. American Airlines can’t be like, “You know, most of our pilots like to land, we just got a few bad apples that like to crash into mountains.”

But even a competency rate of even 99.9 percent isn’t good enough for an armed bureaucracy with immense and dangerous authority over the liberty of Americans. The FBI is never far removed from metaphorically flying a plane into a mountain. The most recent summit struck was the Trump-Russia collusion hoax.

The extent of the wreckage was demonstrated in an April 2020 Harvard-Harris poll that asked:

Do you think that the Steele dossier, with its accusations of Trump’s relationships to Moscow, was real in its findings of Trump colluding with the Russians or was the Steele dossier just campaign opposition research documents fueled by a Russian disinformation campaign?

Seven months before the presidential election, 53 percent answered that the “Steele dossier was real.”

The dirty dossier had already been exposed as a ludicrous partisan hoax. But with the help of the FBI, the ruse worked, paralyzed the White House, and imperiled the safety of the nation.

A December 2019 report from the Department of Justice Office of Inspector General (IG) revealed that Igor Danchenko, Christopher Steele’s primary researcher, told the FBI way back in May 2017 there was “zero” corroboration for the information provided.

FISA Warrants. The IG investigation was severely critical of the FBI for using Steele fantasies to repeatedly obtain Foreign Intelligence Surveillance Act (FISA) warrants against Trump advisor Carter Page—the only person put under such scrutiny during the FBI’s Trump-Russia collusion probe. A New York Times account of Inspector General Michael Horowitz’s presentation of the report to the Senate Judiciary Committee stated Horowitz had “painted a bleak portrait of the F.B.I. as a dysfunctional agency that severely mishandled its surveillance powers.”

Horowitz said the Bureau had behaved with “gross incompetence and negligence”

Beginning in October 2016 and continuing through June 2017 the FBI asked for and received four FISA warrants targeting Page.

The investigation produced zero evidence of wrongdoing by Page and ended without any charges filed. The misconduct was committed by the FBI, which fed the FISA court a pernicious pile of half-truths and distortions to obtain the warrants.

Defining FISA surveillance as one of the “most sensitive and intrusive investigative techniques” available to the government, the IG report concluded in the Page matter, “FBI personnel fell far short of the requirement in FBI policy” that FISA applications contain only “scrupulously accurate” information.

The scrupulously accurate information was this: Page was an officially approved “operational contact” for the Central Intelligence Agency, beginning in 2008 and continuing through 2013. During that period, he made business trips to Russia and occasionally interacted with Russian intelligence officers of interest to the CIA. The IG found that the CIA officer receiving his reports gave a “positive assessment of Page’s candor.”

The FBI learned all this from the CIA in August 2016. But two months later, the FBI’s first FISA application targeting Page told the court all about his connections to Russian spies and left out Page’s positive cooperation with the CIA.

Just before the last application, the Bureau asked the CIA once again about the status of its relationship with Page. The CIA confirmed again that Page was a CIA source.

An FBI attorney named Kevin Clinesmith changed this message to read that Page was “not a source” [emphasis added] and sent it careening recklessly through the careless bureaucracy. (In August 2020 Clinesmith pleaded guilty to making a false statement).

The Inspector General discovered 17 “significant inaccuracies and omissions” in the four Page FISA applications. But as awful as they were, the deceptions regarding Page’s CIA affiliation comprised only two of the Bureau’s misdeeds.

Of the offenses, 13 related to the FBI’s reliance on the discredited Steele dossier. The report found the “Steele reporting” to have “played a central and essential role” in the FBI’s decision to pursue the Page warrants.

After obtaining the first warrant against Page, the Bureau learned that the Steele dossier was a political opposition research project paid for by the Democratic National Committee, Steele was being paid to speak about it to the media, and Steele had openly stated his desire to prevent Trump from winning.

The FISA court wasn’t informed of this important evidence of clear political motivation and bias.

When the FBI discovered Steele had produced witless gossip, that too should have been sent to the FISA judge. It wasn’t.

According to the IG report, the Bureau did exactly the opposite:

Instead, the second and third renewal applications provided no substantive information concerning [Danchenko’s] interview, and offered only a brief conclusory statement that the FBI met with [Danchenko] “[i]n an effort to further corroborate Steele’s reporting” and found the [Danchenko] to be “truthful and cooperative.” We believe that including this statement, without also informing OI [Office of Intelligence] and the court that [Danchenko’s] account of events contradicted key assertions in Steele’s reporting, left a misimpression that [Danchenko] had corroborated the Steele reporting. Indeed, in a letter to the FISC [Foreign Intelligence Surveillance Court] in July 2018, before learning of these inconsistencies from us during this review, the Department defended the reliability of Steele’s reporting and the FISA applications by citing, in part, to [Danchenko’s] interview as “additional information corroborating [Steele’s] reporting” and noting the FBI’s determination that [he] was “truthful and cooperative.”

In the next installment, the FBI shopped the Steele dossier around to the rest of the U.S. Intelligence Community.