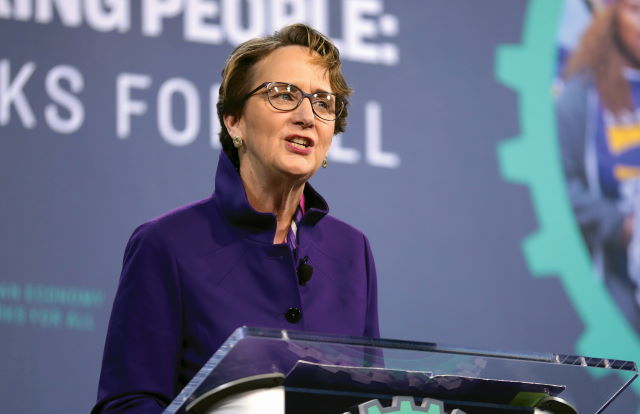 In 2015, Service Employees International Union president Mary Kay Henry defended Planned Parenthood during the controversy over its alleged sale of aborted fetal remains, arguing her union would “stand united with our allies at Planned Parenthood” and affirming that “efforts in Congress to de-fund Planned Parenthood by anti-women, anti-choice extremists must be stopped.” Credit: Gage Skidmore. License: https://bit.ly/3jkoZP3.
by Michael Watson

Big Labor’s alignment with the non-economic Left is most clearly demonstrated by its support for the Planned Parenthood agenda of maximizing abortion and teaching it to young children. In 2020, the national Communications Workers of America, Unite Here Local 11, and UFCW Local 99—all notionally private-sector unions—contributed directly to Planned Parenthood or its affiliates.

Also in 2020, Washington State voters were considering whether to sustain a Democratic and Planned Parenthood–backed proposal to “require public schools to provide comprehensive age-appropriate sexual health education” defined as “age-appropriate instruction in human development and reproduction” starting in kindergarten. The top contributor to the ballot campaign was the regional affiliate of Planned Parenthood Votes, the abortion advocacy group’s political arm. The state affiliate of the social-liberal American Civil Liberties Union was the second largest.

But in third and fourth place, one finds—again—the hand of Big Labor. The Washington Education Association (WEA), the state teachers’ union, and the Service Employees International Union together chipped in $223,311 in in-kind and monetary support to the effort. The institutional support of Washington State’s dominant Democratic Party, the social-liberal movement, and Big Labor combined to ensure that Planned Parenthood’s view of sex education would be taught in every public school in the state, with the measure sustained by a wide margin.

It is important, however, to note that the teachers unions and the SEIU did not opportunistically intervene in the Washington State campaign. Both are institutionally committed to a sexual revolution agenda. In 2019, the National Education Association, WEA’s national parent, formally resolved, “The NEA vigorously opposes all attacks on the right to choose and stands on the fundamental right to abortion under Roe v. Wade.”

The SEIU plays it coy, claiming to take “a neutral position on abortion,” but there is an ironclad case that the militant labor union is firmly on the side of abortion and social-liberal sexual libertinism. In 2015, SEIU president Mary Kay Henry defended Planned Parenthood during the controversy over its alleged sale of aborted fetal remains, arguing her union would “stand united with our allies at Planned Parenthood” and affirming that “efforts in Congress to de-fund Planned Parenthood by anti-women, anti-choice extremists must be stopped.”

The SEIU’s support for Planned Parenthood’s agenda of limitless abortion is not only rhetorical. The SEIU supported a challenge before the Supreme Court to a Louisiana law requiring abortion providers to have hospital admitting privileges. Its regional affiliate in Missouri denounced state officials for impeding a veto referendum targeting proposed abortion restrictions in that state. Its New Hampshire–based Local 1984 targeted Gov. Chris Sununu (R) for vetoing a Democratic-backed bill to require health insurance plans to cover elective abortion. Perhaps most aggressively, SEIU local unions in Massachusetts (alongside the state teachers union) backed the state’s expansive Roe Act, which codified a very liberal approach to abortion access in state law in case the Supreme Court ever limits or overturns its abortion jurisprudence.

Given the unions’ support for Planned Parenthood and expansive abortion access, it therefore cannot be surprising that Big Labor backed the group’s campaign for the power to proselytize five-year-olds.

The ballot campaigns of 2020 demonstrate clearly that organized labor’s economic agenda cannot be divorced from its social agenda. In matters as diverse as racial preferences, approaches to bail and pretrial detention, gun control, drug legalization, and sexual libertinism, Big Labor sided with the seamless garment of social justice liberalism, making it indistinct from the left-wing Big Philanthropy and Big Tech–style “woke capital” factions that some hope a revitalized labor movement could balance against.

And note that there is negligible dissension within the leadership of organized labor over these aggressively left-wing social stances. It is not the case that the Teamsters lean to the right socially while the SEIU leans left. Both align with the Left. It does not matter the issue; it does not matter the state; it does not matter the likelihood of liberal success: The force of the union movement will come down on the same side as radical environmentalists, Silicon Valley billionaires, and the Democratic Party with rare exceptions caused only by direct economic conflict—and once the direct conflict resolves, the happy house of left-liberalism is restored as if the dispute never happened.

Increasing worker voice without empowering the cultural agenda of Big Labor requires more than just idle speculation about European-style labor law. It would in many ways require uprooting labor unions as we know them, by either a potentially decades-long campaign to take them over from within or an equivalent struggle to replace them from without. Efforts to increase union power that do not come alongside efforts to replace or fundamentally reform the institutions of labor unions themselves will not advance the interests of conservative-inclined workers. Instead, they will empower the political adversaries of all strains of conservative policy, a self-inflicted defeat the Right can ill afford.