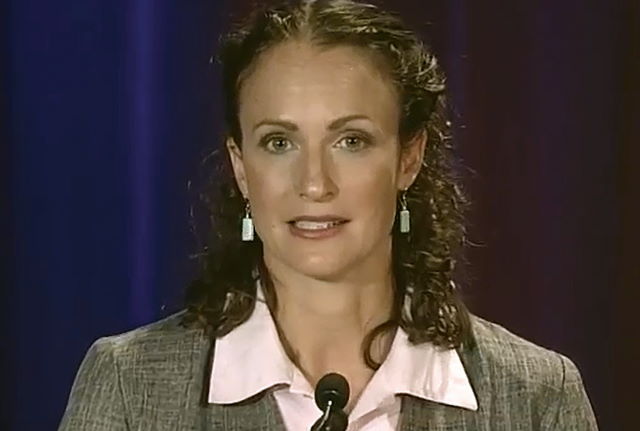 The Montana Federation of Public Employees has been led since mid-2020 by Amanda Curtis, a former left-wing Democratic state legislator whose 2014 campaign for U.S. Senate was upended by revelations that she campaigned with the radical socialist Industrial Workers of the World and honored a former leader of the Communist Party USA on her Facebook page. Credit: C-SPAN. License: https://bit.ly/3ji7kau.
by Michael Watson

Since the early 2010s, numerous states have decriminalized or authorized the use and sale of marijuana products under their own state laws, although the drug remains illegal under federal law. In 2020, New Jersey voted by a comfortable margin to join their number in a ballot-measure campaign.

But even lopsided campaigns have to be funded by somebody, so marijuana industry interests and liberal organizations stepped up to the plate. The top funders were industry groups, most notably the Scotts Company, a fertilizer and seed manufacturer that endorsed marijuana legalization and funded the Good Growth Alliance, a 501(c)(4) advocacy group that backed the campaign. Other supporters included the state affiliate of the American Civil Liberties Union and WeedMaps, an application that lets users find marijuana retailers.

But also on the list was Big Labor pushing a left-wing social agenda. The national headquarters of the United Food and Commercial Workers (UFCW) chipped in $125,000 to New Jersey’s pot legalization effort. UFCW also supported an even more expansive Oregon measure, providing $20,000 to the campaign to decriminalize the possession or use of almost all drugs in that state.

Why the UFCW and not, say, the further-left Communications Workers of America (CWA) or National Nurses United (NNU)? That explanation is more cynical: UFCW has experience unionizing the “regulated vice” industries, with state-monopoly liquor store workers organized by the union. This is most prominent in Pennsylvania, where UFCW Local 1776 represents workers in the state’s strictly regulated government liquor, wine, and beer stores and has campaigned aggressively against any liberalization of the state’s liquor sales laws.

Sure enough, UFCW hopes to unionize state-regulated marijuana retailers across the country. At one point it even created a “cannabis division” for this purpose, though its onetime head, Daniel Rush, was hit with federal charges for allegedly taking kickbacks from California pot businesses he was trying to unionize.

While there is an economic angle to the union backing pot legalization, the core element of Big Labor’s support for liberal-left drug policy aligns with Big Labor’s broader support for left-wing criminal justice and racial-interest policies, like California’s attempt to fundamentally change how bail works. The UFCW provides financial support to a number of broader left-wing groups that intervene in debates over police funding and criminal justice policy. On its 2020 annual report, UFCW reported funding the Democracy Alliance liberal donor collaborative, the Ballot Initiative Strategy Center, and America Votes, among other liberal advocacy coalitions.

In the next installment, expose union support of Planned Parenthood’s agenda of limitless abortion.