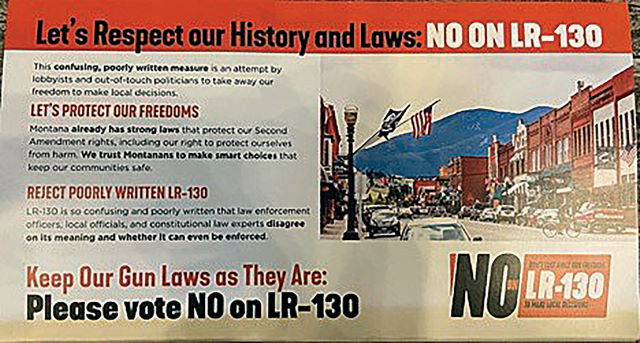 Conservative jurisdictions in liberal states generally cannot enact policy more conservative than their state’s liberalism allows, but the structure of governments has allowed liberal jurisdictions in conservative states to enact more liberal local legislation than the state would prefer. This creates a power imbalance wherein the “red” minorities in “blue” states end up with less power to enact preferred policies than the “blue” minorities in “red” states.

In recent years, “pre-emption” legislation protecting conservative red-staters from the liberalism of blue municipalities have gained steam, with labor-law pre-emption prohibiting local wage ordinances or labor regulations being a favorite of Republican legislators. But pre-emption legislation outside the economic core has also been proposed.

In 2019, the Republican legislature in Montana proposed legislation to pre-empt local governments from placing stricter regulations on firearms carry than the state had enacted. Then-Governor Steve Bullock (D) vetoed it. The legislature then passed textually identical legislation as a legislatively referred state statute, which the governor cannot veto if passed by state voters.

Despite liberal assertions that only the financial power of single-issue groups like the National Rifle Association (NRA) or gun-industry groups like the National Shooting Sports Foundation keeps gun control from advancing, Montana’s LR-130 vote demonstrates the opposite conclusively. An NRA political committee contributed $52,632 to support the law. Opponents of the legislation outspent the gun-rights group 31 to 1.

The appearance of gun-control organizations like the Mike Bloomberg–backed Everytown for Gun Safety on the roll of contributors to the campaign is to be expected, but such single-issue groups were not the lead opponents of LR-130. Instead, the Montana Federation of Public Employees (MFPE), the largest labor union in the state, was by far the largest contributor, outspending the NRA-backed committee 23 to 1 all by itself.

MFPE is both a general government worker union and a teachers union, created by the 2018 merger of the Montana Public Employees Association and the Montana Education Association-Montana Federation of Teachers. Government worker unions, teachers unions especially, are notably hostile to gun rights. The National Education Association (NEA) and the American Federation of Teachers (AFT), two of MFPE’s parent unions, endorsed and participated in the March for Our Lives gun-control demonstration. MFPE reported receiving over $1.3 million in financial support from the national NEA in its 2020 fiscal year.

For its part, MFPE has been led since mid-2020 by Amanda Curtis, a former left-wing Democratic state legislator whose 2014 campaign for U.S. Senate was upended by revelations that she campaigned with the radical socialist Industrial Workers of the World and honored a former leader of the Communist Party USA on her Facebook page.

The massive spending advantage provided by MFPE’s muscle and the radical-left ideologies of its officers challenged Montana’s rural Republican lean and very nearly handed gun-control activists a big win. When all ballots were counted, LR-130 had passed by a margin of just over 1,000 votes.

In the next installment, note union support of efforts to legalize marijuana in state after state.