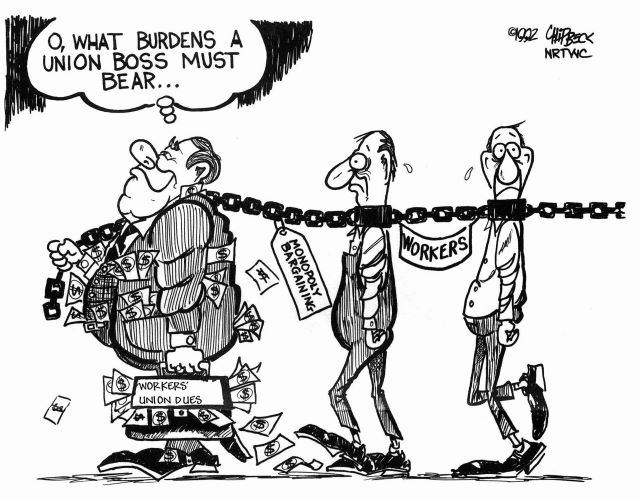 Does organized labor consist of “purely industrial or economical class organizations with less hours and more wages for their motto”—to quote legendary American Federation of Labor president Samuel Gompers? Or has it evolved into a pillar of a left-progressive movement interested in far more than “more” for the American worker? Credit: The D. License: https://bit.ly/3hakqnL.
by Michael Watson

Does organized labor consist of “purely industrial or economical class organizations with less hours and more wages for their motto”—to quote legendary American Federation of Labor president Samuel Gompers? Or has it evolved into a pillar of a left-progressive movement interested in far more than “more” for the American worker?

How one answers that question dictates what one makes of the entreaties that some on the right have made toward institutional organized labor. It should be increasingly clear that the labor movement is so permeated by the ideology of “social justice unionism”—aligning closely with the “non-economic” Left to promote a seamless progressive movement—that those entreaties are futile.

The extent of social justice unionism can be seen through the intervention of labor unions, both public-sector and private-sector, in ballot-measure campaigns beyond a left-of-center “economic core.” It is natural for the union movement to seek to use the state’s coercive power to gain “less hours and more wages” for workers, at least some of whom are union members who may have contract provisions tied to legal standards like minimum wages. Likewise, given the extent of powers that the National Labor Relations Act gives organized labor, special interest groups will fight tooth and nail to preserve or expand those powers, including in ballot-measure campaigns. And public-sector unions are the principal beneficiaries of tax hikes, making Big Labor’s support for just about every tax increase ever proposed academic.

But where is the “economic core” in affirmative action, left-wing “bail reform,” restrictions on Second Amendment rights, legalization of marijuana, and expanded “comprehensive sex education”? All five of those questions appeared on ballots in California, Montana, New Jersey, and Washington State in 2020, and in all those cases Big Labor came down on the side of the Left, exactly as a “social justice unionism” model of labor union political behavior would predict.

California has a long history of ballot-measure campaigning, with voters routinely seeing at least 10 statewide initiative proposals, bond measures, constitutional amendments, or veto referenda on general election ballots. November 2020 was no exception, with 12 measures on the ballot.

Three of the most prominent measures clearly had an economic core: Proposition 15, a giant tax increase on commercial properties; Proposition 21, a massive expansion of rent control; and Proposition 22, a reform to the state’s onerous “AB 5” labor regulations on ride-sharing and similar “gig” work that had been midwifed to passage by the California Labor Federation.

But two measures were clear efforts to inculcate social left-progressivism deeper into the state’s law and policy: Proposition 16 would have overturned the state’s prohibition on racial preferences in government contracts and public university admissions, and Proposition 25 would have enacted a New York–style “bail reform” law that would replace monetary bail with “risk assessments.”

Proposition 16 sought to repeal an earlier measure, Proposition 209, that prohibited California state government from explicitly discriminating or granting “preferential treatment to persons on the basis of race, sex, color, ethnicity, or national origin in public employment, public education, and public contracting.” Opportunity for All Coalition was the Orwellian-titled lead campaign committee, and it raked in over $21.5 million in contributions in 2020. Much of that funding came from the world of liberal Big Philanthropy and Big Tech. Quinn Delaney, co-founder of the race-focused Akonadi Foundation, contributed $6.7 million. George Soros’s Open Society Policy Center contributed $1 million. Microsoft executive Steve Ballmer and his wife Connie contributed $1 million together. And Patricia Quillin, wife of Netflix chief Reed Hastings, contributed $1.5 million.

But the number-two contributor to Proposition 16 after Delaney was not from liberal Big Philanthropy or Big Business: It was Big Labor. The California Teachers Association Issues Political Action Committee (PAC), a political committee of the California Teachers Association (CTA) labor union, contributed a combined $3.5 million toward the enshrinement of racial essentialism in the California constitution. CTA was joined by other labor unions and labor union political committees in providing major contributions to the Proposition 16 campaign, including:

Proposition 25 was a similar story. In 2018, the state passed a left-wing “bail reform” law that replaced cash bail with “risk assessments.” Under the traditional bail scheme, suspects wishing to be released from pretrial detention must deposit a cash surety amount set by the court that is repaid upon completion of their trials, often with the assistance of a commercial bail agency loan for which the detained suspect is not refunded. Left-wing criminal justice advocates have proposed various schemes to replace traditional bail; California’s relied on risk assessments that the legislation did not specify.

Opponents led by the trade group for bail agencies challenged the law in a veto referendum, gaining the support of the ACLU, which attacked the legislation from the left for its use of computer algorithms to make risk assessments. Supporters of the legislation raised over $14 million to defend it in the referendum. Like Proposition 16, many top supporters came from liberal Big Philanthropy, with John Arnold of Arnold Ventures contributing $5 million, the Ballmers contributing $6 million together, and Tom Steyer and Quinn Delaney each contributing $500,000.

But the other top donor was again Big Labor. Various arms and PACs affiliated with arms of the Service Employees International Union (SEIU)—including the California State Council, Local 2015, Local 1000, and Local 521—provided over $1 million in monetary and nonmonetary support to the campaign to defend the legislation. A PAC affiliated with the California Federation of Teachers also provided a five-figure donation to the effort.

Even dark-blue California, however, has lines of leftism its electorate is unwilling to cross, even when Big Labor massively backs crossing them. Both Propositions 16 and 25 failed. California voted against the union line on cultural issues, just as it did on economic core issues by defeating the union-backed commercial tax hike Proposition 15 and by overriding portions of the union-drafted AB 5 legislation through Proposition 22.

In the next installment, learn about Big Labor’s role in pushing for gun control in Montana.