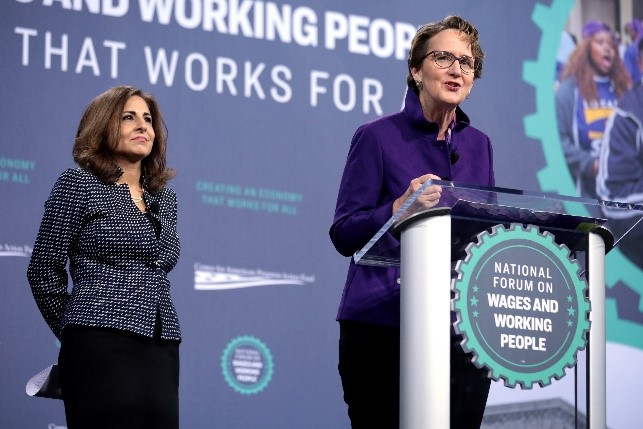 The ostensible purpose of a labor union is to represent workers as a class in negotiations with an employer, securing economic and workplace benefits. This purpose can be seen today in unions’ self-praise for their historical victories, most notably Big Labor’s claim that its actions “gave you the weekend.”

But while the American Federation of Labor’s founding president Samuel Gompers might have focused strictly on collective bargaining with employers rather than securing government favor for the working classes, by the early 20th century labor sought formal government recognition in the form of mandatory monopoly bargaining and government labor protections. With the passage of National Labor Relations Act and Fair Labor Standards Act during the New Deal era, the Congress of Industrial Organizations moved firmly into the political arena, forming an alliance with the Democratic Party that continues to this day.

And while the union-Democratic alliance may have been forged and sealed with left-liberal economic policy, today’s unions have a full-spectrum political agenda that goes far beyond economic policy.

Government Worker Unions. This is well documented in the case of government worker unions, some of which have taken explicit positions on the left of American social-policy debates. In 2019, the National Education Association (NEA), America’s largest labor union, adopted “Business Item 56” at its annual convention. That resolution held that the NEA “will include an assertion of our defense of a person’s right to control their own body, especially for women, youth, and sexually marginalized people” and that the union “vigorously opposes all attacks on the right to choose and stands on the fundamental right to abortion under Roe v. Wade.”

For its part, the American Federation of State, County, and Municipal Employees (AFSCME), the largest non-teacher government worker union, is an occasional financial supporter of Planned Parenthood, having provided Planned Parenthood’s “social welfare” arm Planned Parenthood Action Fund with $400,000 in 2014.

Mixed-Status Unions. A number of mixed-status national unions cloud any “clean break” between the government worker unions (recognized by almost all conservatives as universally institutionally hostile to their goals) and the private-sector unions seen by some conservatives as potential allies in their struggles with “woke capital” and the straw-man “libertarians” said to run the conservative movement. The most prominent is the SEIU, which has major divisions in the government sector (e.g., SEIU Local 1000, representing exclusively California state and municipal employees), the parastatal sector (e.g., 1199SEIU, representing workers in the highly state-tied, largely government-funded, and heavily government-regulated hospital sector in New York), and the private sector (e.g., SEIU 32BJ, representing building services workers and security guards).

Like the teachers’ unions, SEIU is a staunch supporter of left-progressive social policy. Unlike NEA, the union has affirmed a “neutral” stance on abortion, but this neutrality is nominal. The union has funded pro-abortion-rights organizations such as Planned Parenthood and the Center for Reproductive Rights, and SEIU national president Mary Kay Henry issued a 2015 statement in which she said SEIU would “stand united with our allies at Planned Parenthood. . . . Efforts in Congress to de-fund Planned Parenthood by anti-women, anti-choice extremists must be stopped.” In 2020, the SEIU joined the NEA, AFT, and AFSCME in co-signing an amicus curiae brief to the Supreme Court for a case seeking to overturn an abortion regulation in Louisiana (a story that Robert Stilson covered in a piece for CRC in February).

Private-Sector Unions. But what of the principally private-sector unions? Many of them hold social positions no different from their government- and parastatal-sector brethren. The Teamsters, often identified by conservatives as a union open to supporting populist Republicans for historical reasons, is actually in close alignment with the SEIU. James P. Hoffa, president of the Teamsters and son of the infamous Jimmy, also heads Change to Win, the labor union alliance and “strategic organizing center” that was created by former SEIU boss Andy Stern as a rival to the longstanding AFL-CIO labor federation. Local- and state-level Teamsters units have endorsed “sanctuary” policies against immigration enforcement and supported California legislation to subsidize film projects leaving conservative states over abortion regulations.

In the next installment of Organized Labor Is Not a Potential Ally, see that the personal networks of union staff are far-left wing.