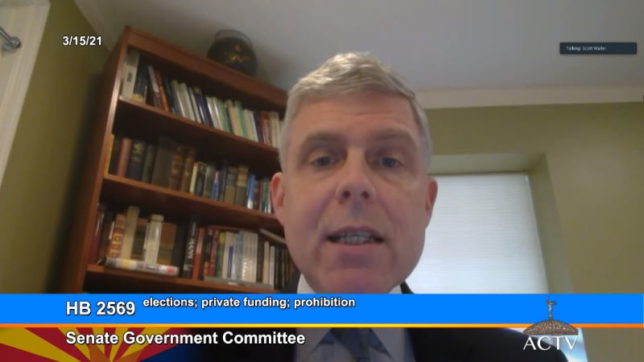 On Monday, March 15, 2021, Scott Walter, president of the Capital Research Center, testified (virtually) before the Committee on Government of the Arizona Senate on private funding of the 2020 Arizona elections by the Center for Tech and Civic Life.

Testimony before the
Arizona Senate Committee on Government

Chairman Ugenti-Rita, Vice-Chairman Townsend, distinguished Members of the Committee:  Thank you for allowing me to testify. I’m Scott Walter, president of the Capital Research Center in Washington, D.C., a 36-year-old think tank that is a watchdog on nonprofits.

The bill especially raises one critical question about one nonprofit funded by one billionaire family in last year’s elections to the tune of hundreds of millions of dollars.[1]

Personally, I do not want donors or nonprofits anywhere on the political spectrum manipulating elections through gifts to government offices.

One would think the question whether to permit private funding of Arizona’s election offices would be simple, something Left and Right could agree on:  Should Arizona’s elections be governed by the people’s representatives, or by one Big Tech billionaire?

As a student of the Left’s role in politics, I’m amazed anyone left of center would be unsure how to answer. For years we’ve heard left-leaning officials, and left-leaning nonprofits, decry political donations by billionaires. In Washington, prominent Democrat Alexandria Ocasio-Cortez has objected to the very existence of billionaires.[2]

These attacks typically feature criticism of so-called “dark money.” I easily found three Members of this Committee on the record criticizing it:

I can assure the Committee that the nonprofit which likely spurred the writing of this bill, namely, the Center for Tech and Civic Life (or CTCL), funded by the billionaire family of Facebook’s Mark Zuckerberg, is as “dark” and “outside” as they come.

Much worse, however, because at least CTCL’s “darkness” about donors is legally permitted, it also refuses to reveal where its hundreds of millions went in the last election. CTCL has admitted that thousands of local election offices in dozens of states received grants of $5,000 or more, and it has posted a “preliminary” list of local government offices that received funds.[6]

But of course, the critical question is how much money went to which election offices. CTCL refuses to make public that information, even though federal law requires it to report on its IRS Form 990, a public document, every grant of $5,000 or more to any government agency.[7] Conveniently, CTCL can delay filing that document until November 2021. It has refused to answer these kinds of burning public questions, despite being asked by the New York Times,[8] the Associated Press,[9] National Public Radio,[10] American Public Media,[11] the New Yorker,[12] and others.

Nonetheless, we at Capital Research Center have examined CTCL’s list, as well as news databases and local government reports, to assemble the fullest data set currently available. We think these numbers won’t change much when the full truth comes out because we’ve found grant amounts for most large jurisdictions.

We’ve publicly disclosed all the data we can find and published reports for the states of Arizona,[13] Nevada,[14] Pennsylvania,[15] Georgia,[16] Michigan,[17] Wisconsin,[18] North Carolina,[19] and Virginia.[20] For every state we’ve examined, it is clear Zuckerberg’s funding via CTCL has produced a highly partisan pattern. Consider a few data points:

The pattern repeats in state after state, although Arizona may be slightly out of the ordinary in a few respects:  First, CTCL is far more likely to fund election jurisdictions with heavy Democratic votes. Second, it funds those jurisdictions much more heavily per capita. Third, jurisdictions it funded boosted Democratic turnout far beyond the statewide margin of victory.

When I testified in February on this same bill to the Arizona House Government and Elections, Rep. Athena Salman tried to claim I had spoken incorrectly about the pattern of funding and voting in Arizona, because one of the larger CTCL grants went to Pinal County, which has a Republican majority.

Rep. Salman’s statement was unfair and untrue. In fact, I never made a claim in my oral or written testimony that only Democratic counties in Arizona received the largest grants, and my written testimony, submitted beforehand to every Committee Member, linked to our report on Arizona, which lists all CTCL grants we were able to find for the state. Our report clearly shows that Pinal county had the second largest grant that—with no disclosure from CTCL itself—we know of.[23]

Several additional points should be made about Rep. Salman’s inaccurate criticism:

The most overwhelming fact about CTCL’s funding in Arizona appears when we compare the 2020 presidential vote with the 2016 results. Turnout was up for both political parties in every Arizona county, but counties with CTCL funding saw even higher turnout jumps than unfunded counties.

In other words, counties without funding saw Republicans beat Democrats in increased turnout. But Democrats beat Republicans in funded counties, which saw a dramatic leap in Democratic turnout. In percentage terms, for Republicans, having counties receive funding helped their party’s turnout perform 46 percent better than turnout in unfunded counties. But for Democrats, CTCL’s funding juiced counties’ Democratic turnout to an 81% better performance. This partisan difference approaches the neighborhood of a two-to-one enhancement for Democrats. In raw votes, the nine funded counties saw Democrats beat Republicans by almost 122,000 votes,[25] a margin of victory that is an order of magnitude larger than the state’s total official victory margin of 10,457 votes.[26]

It is hard to square these facts with the federal requirement that 501(c)(3) nonprofits like CTCL must be nonpartisan at all times, that they may not conduct “voter education or registration activities” that “have the effect of favoring a candidate,” as the IRS puts it.[27] Unfortunately, such nonprofits have for years been ignoring federal law by conducting registration and get out the vote efforts that favor one party. Liberal journalist Sasha Issenberg, in his masterful 2012 book The Victory Lab: The Secret Science of Winning Campaigns, wrote of one such nonprofit, the Voter Participation Center,[28] that’s still active[29] in elections: “Even though the group was officially nonpartisan, for tax purposes, there was no secret that the goal of all its efforts was to generate new votes for Democrats.”[30]

In the case of CTCL, this partisanship wouldn’t surprise anyone who consulted InfluenceWatch.org for its leaders’ backgrounds: All its founders first worked at a 501(c)(4) nonprofit, the New Organizing Institute, which was such a powerful turnout machine that the Washington Post labeled it “the Democratic Party’s Hogwarts for digital wizardry.”[31] The two groups, CTCL and New Organizing Institute, are so similar that Capital Research Center created a quiz showing quotations from their two websites and asking readers to guess which group’s website said it.[32] The test is quite difficult. It is nearly impossible to tell the old (c)(4) political nonprofit from the new (c)(3) “nonpartisan” nonprofit.

I urge you to investigate every dealing CTCL had with every Arizona government office. Did the contacts begin from the Center’s side? What preconditions did the Center put on its funds? Did the counties fulfill their budgetary and other obligations under Arizona state law when using these funds? Who designed voter “education” materials and advertisements? Who was hired? Who trained them? Was any money spent on training that would help prevent vote fraud?

The problem of illicit nonprofit partisanship is for the U.S. Congress to solve. But the problem of nonprofits hoping to privatize Arizona’s elections is, I respectfully submit, your responsibility.

[29] For example, according to Time magazine, in the November 2020 election the Voter Participation Center “sent ballot applications to 15 million people in key states, 4.6 million of whom returned them.” Molly Ball, “The Secret History of the Shadow Campaign That Saved the 2020 Election,” Time, February 4, 2021; https://time.com/5936036/secret-2020-election-campaign/. For a memo detailing the partisan backgrounds of all the persons and groups who make up what that article’s author calls a “conspiracy” and a “cabal” aimed at defeating President Trump, see https://capitalresearch.org/article/the-groups-and-persons-mentioned-in-times-shadow-campaign-article/.

[31] Brian Fung, “Inside the Democratic Party’s Hogwarts for Digital Wizardry,” Washington Post, July 8, 2014. https://www.washingtonpost.com/news/the-switch/wp/2014/07/08/inside-the-democratic-partys-hogwarts-for-digital-wizardry/. For more on CTCL and the New Organizing Institute, see their InfluenceWatch entries: https://www.influencewatch.org/non-profit/center-for-tech-and-civic-life/ and https://www.influencewatch.org/non-profit/new-organizing-institute/.