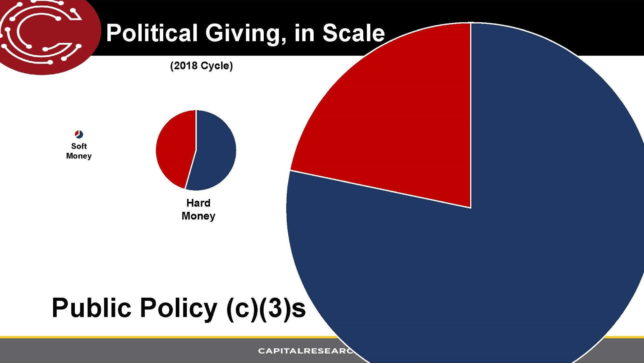 Of the three “rivers” of money influencing our politics in the 2018 election cycle, the about $20 billion raised by 501(c)(3) groups was by far the largest. Credit: Capital Research Center.
by Scott Walter and Bradley A. Smith

Summary: On May 4, 2022, a subcommittee of the U.S. Senate Committee on Finance held a hearing on “Laws and Enforcement Governing the Political Activities of Tax Exempt Entities.” Scott Walter, president of Capital Research Center, and Bradley A. Smith, chairman and founder of the Institute for Free Speech, testified in person (see here). After the hearing, some of the senators submitted additional questions for the record. The following is a selection of their answers.

Senator John Thune (R-SD): Can you explain your claim that 501(c)(4) organizations are not the most significant concern in regard to the political activity of tax-exempt organizations?

Scott Walter: Groups exempt under 501(c)(4) of the tax code, also known as “social welfare organizations, receive attention from many politicians that is grossly disproportionate to their significance in American politics. These groups, many of which are well known to Americans, such as Planned Parenthood and the National Rifle Association, receive far less funding than is given either directly to political parties and campaigns—so-called “hard” dollar giving—or to 501(c)(3) groups that actively engage public policy.  My colleagues at the Capital Research

Center examined giving to all three of these “rivers” of money influencing our politics in the 2018 election cycle. The 501(c)(4) river was more of a creek at roughly $123 million, compared to about $5 billion taken in by “hard” dollar political groups and about $20 billion raised by 501(c)(3) groups that engage political issues (think tanks, advocacy groups, and the like).[1]

In addition to the very limited wealth of 501(c)(4) groups, there is also the fact that Americans have no trouble understanding many of those groups’ political slant, whether it is support for abortion, or for Second Amendment rights, and so on. But few Americans have any idea of the extent of 501(c)(3) groups’ subtle, often hidden work to influence who actually votes in elections. While some Senators known as “dark money hawks” complain that (c)(4) groups criticize them and their allies, the same politicians never mention how left-wing (c)(3) private foundations such as Ford and Open Society fund—and left-wing (c)(3) public charities such as the Voter Participation Center execute—voter registration and get-out-the-vote campaigns that actually drive election results, apparently flouting strict IRS rules that require (c)(3) groups never to intend, or even to “have the effect” of favoring a candidate or group of candidates.[2]

Compare the IRS’s direct legal prohibition with this language, from a Democratic-aligned super PAC, which in 2020 wrote left-wing donors that in the 2020 election cycle, the “single most effective tactic for ensuring Democratic victories—[is] 501(c)(3) voter registration focused on underrepresented groups in the electorate.” The super PAC even explains the tax advantages: “Well-designed” (c)(3) voter registration is, on a pre-tax basis, “2 to 5 times more cost-effective at netting additional Democratic votes than the tactics that campaigns will invest in. . . . Because 90 percent of the contributions we are recommending for voter registration and GOTV efforts will go to 501(c)(3) organizations and hence are tax-deductible,” after taxes, “such programs are closer to 4 to 10 times more cost-effective. . . . They are also eligible recipients of donations from donor-advised funds and private foundations.”[3]

The 501(c)(3) group Voter Participation Center was one of this memo’s three recommended recipients of dollars aimed at “ensuring Democratic victories,” which is no surprise, given that liberal reporter Sasha Issenberg in his well-received book The Victory Lab: The Secret Science of Winning Campaigns had already said the group (then operating under a different name) was a partisan operation despite legal prohibitions:  “Even though the group was officially nonpartisan, for tax purposes, there was no secret that the goal of all its efforts was to generate new votes for Democrats.”[4]

The same super PAC memo also urges mega-donors to direct cash to “Everybody Votes,” which is an even larger 501(c)(3) operation that works to microtarget registration and get-out-the-vote aimed at “ensuring Democratic victories.” Everybody Votes is a multi-year, $100+ million project, designed originally by Democratic party operatives and conducted via the almost-unknown 501(c)(3) Voter Registration Project. As the super PAC’s secret memo explains to donors, “Everybody Votes is a national organization that funds and trains a consortium of 50+ local community groups across the country that do the actual registration work,” which means that dozens of other charities are involved in this scheme and deserve investigation for possible illegal partisanship.[5]

Of course, even these brazen efforts to use (c)(3) groups to influence elections pale in comparison to the so-called Zuck Bucks operation in 2020. That involved the family of Facebook/Meta billionaire Mark Zuckerberg, as well as the “dark money” empire connected to Arabella Advisors, passing hundreds of millions of dollars through two 501(c)(3) groups and into actual government election offices at the state and local levels. Capital Research Center has conducted extensive investigations into the way that this money had a disproportionately partisan effect in every battleground state. That partisan effect was to be expected, given that the leaders of those two (c)(3) groups have partisan backgrounds. One group’s founder worked at People for the American Way, a 501(c)(4) notorious for creating the multimillion-dollar political battles over Supreme Court nominations in 1987, when it spent millions on ads that smeared the Republican nominee Judge Robert Bork.[6] The other group was founded by alumni from a 501(c)(4) group described by the Washington Post as, “The Democratic Party’s Hogwarts for Digital Wizardry.”[7]

The abuses involved in Zuck Bucks have led twenty states, at this writing, to restrict such private funding of their election offices. Anyone who doubts the partisan nature of this problem can consider how another half-dozen states’ legislatures have passed such restrictions, only to have them vetoed by governors—every one of whom is a member of one political party.[8]

In sum, the biggest offenses are committed by 501(c)(3) groups, not 501(c)(4)s. I am honored to have appeared before this subcommittee, and I look forward to coming back whenever this much more critical concern is addressed.

[1] Shane Devine and Michael Watson, “Political and Policy-Oriented Giving After Citizens United: An Update to CRC’s 2017 Analysis,” December 17, 2020, https://capitalresearch.org/article/political-and-policy-oriented-giving-after-citizens-united-an-update-to-crcs-2017-analysis/. Please note that our number for 501(c)(3) revenues covers only a fraction of the entire 501(c)(3) world, which also encompasses religious groups, the Salvation Army, Goodwill, etc.

[5] For the details of Everybody Votes/Voter Registration Project, see https://www.influencewatch.org/nonprofit/voter-registration-project/.

In the next installment, “dark money” has no clear definition, although for the Left the best definition may be “support for speech the Left wants to silence.”