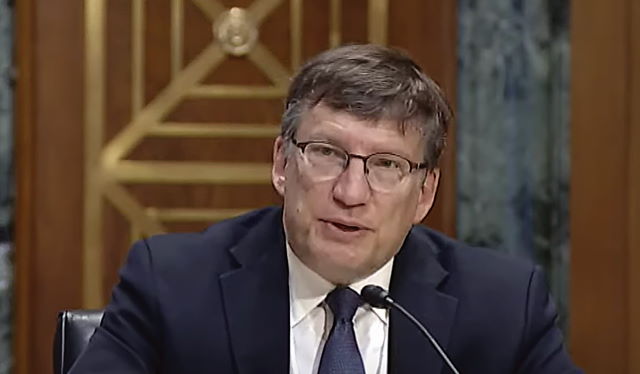 Recognizing the inextricable link between privacy, freedom of association, and free speech, the Court unanimously ruled that the government could not force groups to surrender their member lists. —Bradley A. Smith. Credit: C-SPAN. License: https://bit.ly/3QCluAF.
by Scott Walter and Bradley A. Smith

Senator John Thune (R-SD): What do you find to be the greatest dangers of donor disclosure for 501(c)(3) and 501(c)(4) organizations and their donors? What historical examples of harm do you find most disturbing?

Bradley A. Smith: To take the second part of the question first, the story of the harms of donor disclosure in the modern era must highlight harassment of the NAACP. In the 1950s, Alabama attempted to force the NAACP to provide state authorities with a list of the names and home addresses of all of the group’s members in the state. The NAACP was highly controversial at the time and seen by southern state governments as the enemy. If its individual members were identified to state officials at the height of Jim Crow, the risk of harassment and intimidation—or worse—was self-evident.

The state’s demand for donor information was clearly meant to intimidate supporters of the organization. By exposing large supporters to the NAACP, Alabama could then use the other levers of regulatory power at its disposal to inflict economic harm as reprisal for supporting the NAACP, or count on private action—including possibly illegal actions—to accomplish the same. Had the state succeeded in obtaining a list of NAACP supporters, efforts to secure civil rights in Alabama and all across America would have faced yet another huge hurdle.

But in its 1958 decision in NAACP v. Alabama,[1] the Supreme Court saved the nation from that fate. Recognizing the inextricable link between privacy, freedom of association, and free speech, the Court unanimously ruled that the government could not force groups to surrender their member lists. Such “exposure,” as the High Court termed it, would greatly damage organizations’ ability to fulfill their missions. In the words of the Court, Alabama’s demand restricted free association rights because it “may induce members to withdraw from the Association and dissuade others from joining it because of fear of exposure of their beliefs…”

The harms that the segregationist South could inflict on an organization like the NAACP represent the most severe danger that can come from disclosure laws. But it is neither the only risk, nor the only time that courts have recognized that disclosure laws cause harm. In the campaign finance context, the court recognized in 1976’s Buckley v. Valeo that:

The Court has ruled that the harm of disclosure laws outweighed the benefit in other contexts, too. Brown v. Socialist Workers ’74 Campaign Committee[3] upheld the rights of an unpopular minority party to keep the names of its members, donors, and vendees private in order to avoid both “governmental and private hostility.” In McIntyre v. Ohio Elections Commission,[4] the Court struck down an Ohio statute requiring political handbills advocating the passage or defeat of a school tax to list the names of those “responsible therefor.” We should note that in both of these instances, the speech at issue was directly related to campaigns, elections and politics, and yet, even in such circumstances, the Court saw the harms of disclosure as too high.

Just last year, in Americans for Prosperity Foundation v. Bonta,[5] the Court ruled that 501(c)3 charities have the right to keep their major supporters private from state governments. The Court ruled that California’s attempt to mandate donor reporting was not narrowly tailored to an important government interest for the state. It also found that the threats of reprisal and harassment presented at trial against AFPF were real.

There are, of course, other cases where disclosure rules have been upheld, typically relating to public reporting of large donations to candidates, political parties, and groups with a major purpose of supporting or opposing candidates in elections. But the Court has deeply scrutinized efforts to expand disclosure laws beyond their current bounds and has long recognized that any disclosure rule brings with it real harms to First Amendment rights.

Critics respond that we are not living in 1950’s Alabama anymore, so why worry? Perhaps the best way to see the threat is to look at specific examples of harm caused by a) legally allowable disclosures, or b) illegal disclosures of donations to nonprofit organizations (through either outside hacking or government malfeasance.) Any law that extends disclosure rules would increase the likelihood of events like these.

In 2022, Tammy Giuliani made a lawful $250 donation to the Canadian trucker’s convoy, the movement that briefly paralyzed Canada’s capital and garnered international attention for its protest against COVID-19 mandates.[6] Hackers leaked information about her donation and thousands of others, leading to widespread threats and harassment against the donors. The threats forced the café to close.

In 2021, Sgt. William Kelly, a police officer in Virginia, and Craig Shepherd, a paramedic in Utah, made lawful $25 and $10 donations, respectively, to the legal defense fund of Kyle Rittenhouse, who was on trial for homicide after fatally shooting two men and wounding another during a night of riots and unrest in Kenosha, Wisconsin. Both Kelly and Shepherd became targets for harassment after hackers exposed donations to Rittenhouse’s legal fund and additional details were published in The Guardian.[7] Kelly was fired from his job as a Virginia police officer. An ABC News reporter showed up at Shepherd’s house with a camera in tow to harass him in the name of “reporting.” In both cases, the donors had done nothing illegal and were targeted simply for exercising their First Amendment rights.

In 2021, Cara Dumaplin, a registered neo-natal nurse, created a successful internet business helping parents of newborns with parenting and childrearing advice. A business competitor shared screenshots of Dumaplin’s political contributions showing that she had made donations to the re-election campaign of Donald Trump. Dumaplin made 36 donations between $25 and $35 to the Trump campaign – not exactly huge money.[8] The screenshots of the Federal Election Commission report were widely shared across social media platforms. Given the vast unpopularity of Dumaplin’s political association among her clientele, the result was no surprise: Boycotts of her website, merchandise, and consulting services ensued.

In 2019, Congressman Joaquin Castro tweeted out the names of 44 of his constituents in San Antonio who made lawful contributions to Donald Trump’s re-election, accusing them of “fueling a campaign of hate.”[9] Donors immediately began receiving threatening phone calls, boycotts of the businesses where they worked, and a pressure campaign to ostracize them for donating to a candidate their congressman disagreed with. A similar story occurred in New York, where Congressman Tom Suozzi threatened to name and shame donors who gave to candidates that had a position different from his own on the SALT tax deduction.[10]

Stories like this are too numerous to catalogue. Yet many never come to light because the harassment is carried out privately and has its desired effect: the person stops supporting or associating with the group and stops speaking out about the issue. Given the ease of finding and spreading donor information on the internet, disclosure-fueled harassment is likely to become more, not less, common over time. If politicians are ready to threaten donors over differences in tax policy, and if people are organizing boycotts and threatening individuals and businesses over $25 donations to candidates they don’t like, then imagine the harms inflicted if every Planned Parenthood donor, every National Rifle Association member, and every Black Lives Matter supporter were forcibly published on a government website. That is the danger of creating new, more expansive disclosure laws.

[10] Tiffany Donnelly, “All I Want for Christmas Is Lawmakers to Respect Privacy,” Institute for Free Speech, December 16, 2020, https://www.ifs.org/blog/christmas-lawmakers-respect-privacy-suozzi-disclosure/.

In the next installment, both the Treasury Department and the Senate Finance Committee concluded that the IRS targeted conservative and Tea Party groups.