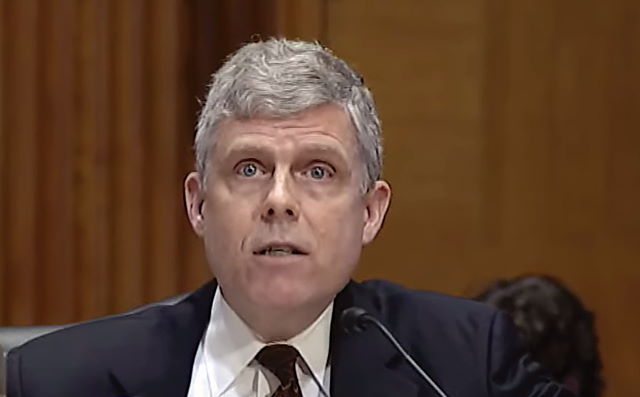 Groups exempt under 501(c)(4) of the tax code, also known as “social welfare organizations,” receive attention from many politicians that is grossly disproportionate to their significance in American politics. —Scott Walter Credit: C-SPAN. License: https://bit.ly/3QCluAF.
by Scott Walter and Bradley A. Smith

Elizabeth Warren (D-MA): Your organization—the Capital Research Center (CRC)—has criticized the role of dark money on the left and opposed any and all IRS reporting requirements which would eliminate this problem.[1] In your testimony before this subcommittee, you reiterated those views.[2]

Is Capital Research Center a recipient of any dark money?  If so, please provide information on the identity of your dark money donors, and the amount they have contributed in each of the last five calendar years.

Walter: With all due respect, Senator Warren, your question is problematic for several reasons. You say my group “has criticized the role of dark money on the left,” but that criticism appears in neither of the two citations you give. The first citation is to an article of ours that opposes IRS reporting requirements for “dark money” groups, but the article does not criticize such giving by any part of the political spectrum. Your second citation is not to my own testimony but to Brad Smith’s written testimony at this hearing, in which he does not criticize left-wing “dark money.” As for my testimony, written and oral, I defy you to quote a single instance of my criticizing “the role of dark money on the left.” Instead, I make several quite different points about “dark money”:

Your question also displays one of the largest challenges posed by the phrase “dark money,” namely, that there is no clear definition of it. Because of the way politicians like you and Chairman Whitehouse use the term, with no legal precision but only as an insult, I testified to Senator Whitehouse last year in the Judiciary Committee that perhaps the best definition is, “support for speech the Left wants to silence.”[12]

In the same testimony, I noted that Chairman Whitehouse and some colleagues had just published a report, Captured Courts, that had no fewer than 18 uses of this term, yet never gave a legal definition of it: Is it money in 501(c)(3) nonprofits? in (c)(4) nonprofits? (c)(6)s? in donor-advised funds? All these and more meet the report’s sole criterion of “funding for organizations and political activities that cannot be traced to actual donors.”[13]

In this current hearing, held in the subcommittee responsible for oversight of the IRS, one would expect you and Chairman Whitehouse to give a clear definition of “dark money” with references to the relevant sections of the tax code—if, in fact, you were raising the issue in good faith, rather than invoking it as a vague insult that drives attention away from the substance of public policy debates like, say, the proper judicial philosophy for a judge.

As for the question you raise on efforts to have government force the disclosure of nonprofit donors, you are correct that the Capital Research Center has criticized those efforts, and I would add that the U.S. Supreme Court has recently affirmed in Americans for Prosperity v. Bonta that California’s donor disclosure requirement burdened donors’ First Amendment rights without being narrowly tailored to an important government interest.[14] As your fellow advocates for such disclosure have made clear,[15] they believe donor disclosure will harm both the donors and the grantees forced to disclose—a fact that reveals the central disagreement over forced government disclosure: As a defender of citizens’ privacy, I do not wish to harm donors and groups I disagree with, and I respectfully urge you and Chairman Whitehouse to end your campaign to harm donors and groups you disagree with.

This problem—your and others’ desire to squelch speech and intimidate donors—brings us to your final questions: whether Capital Research Center has received any “dark money” and if so, from whom and in what amounts. In addition to the issue that you have failed to define your central term, there is also the fact that Capital Research Center will not violate our donors’ privacy. This, too, was made clear in my written testimony to you and the committee:

“The practical reason for opposing disclosure arises from the very real threats, felt across the political spectrum, of mob harassment and worse. And Mr. Chairman, just as your side has more groups, active for more years, and possessed of far more ‘dark money,’ so does your side have more mobs.” I prefer to “stand with the NAACP of Bull Connor’s Alabama, and with the NAACP of today, and with the ACLU and the Human Rights Campaign, in opposition to government schemes to force private citizens to disclose their donations.”[16]28

But let me thank you, Senator Warren, for honoring me with two questions. I was disappointed that neither you, nor Chairman Whitehouse, nor any other Member of your party asked me a single question at the hearing itself, where we could have had a respectful public dialogue. The failure to engage in such dialogue is but another reason to conclude that you invoke the bogeyman of “dark money” to prevent substantive exchanges in public. I note that the Ranking Member, by contrast, asked questions of both parties’ witnesses.

Sen. Warren: CRC has denied the existence of climate change and praised the oil industry as one of “American’s most generous industries.”[17]

Has CRC received funding from any fossil fuel company in any of the last five years?  If so, please provide the name of the company, the amount provided to CRC, and the terms and conditions of these contributions.

Walter: Respectfully, the footnote you provided to assert your first claim is perplexing. The first of the two articles it cites is an article by Dr. Steven Allen involving deception in politics and policy that barely references climate issues, and the second, incomplete citation is to something called “Capital Research Service” by an author who died a decade ago.

If you care to read an article by Dr. Allen that deals extensively with the science of climate issues, there are many better ones to choose from.[18] We also have articles that document the connections between strains of environmentalism and eugenics, which were supported by philanthropies funded by Rockefellers, Carnegies, Kelloggs, and others.[19] But while our researchers express their opinions on many matters, including climate science, Capital Research Center as an organization takes no position on climate change.

As for your question on whether “fossil fuel” companies have supported us in the last five years, we will not, of course, as explained in the previous question, violate our donors’ privacy, guaranteed by NAACP v. Alabama. But knowing that you, Chairman Whitehouse, and others often use a group’s donors to dismiss your responsibility to address the substance of your opponents’ views, I had our development staff analyze our donations in recent years. They found donations from corporations made up only a few percent of our revenues, and the corporations represented were small- to medium-sized.

In addition, while we do not violate our donors’ privacy, those donors have the right to choose to disclose their donations publicly. One major corporation, ExxonMobil, did so in 2008 at the behest of its CEO, Rex Tillerson, the future Secretary of State under President Donald Trump.[20] At that point, a decade and a half ago, ExxonMobil announced it would no longer fund Capital Research Center. Please note that this funding change made no difference whatsoever in our research or views.

[2] Scott Walter, “Testimony of Scott Walter Before the Senate Finance Committee, Subcommittee on Taxation and IRS Oversight,” May 4, 2022, https://www.finance.senate.gov/imo/media/doc/2022-05-04_Smith%20Testimony_US%20Senate.pdf.

[10] The multiple comes from OpenSecrets’ calculation for the 2020 election cycle. See https://www.opensecrets.org/outsidespending/summ.php?cycle=2020&disp=O&type=U&chrt=P.

[13] Debbie Stabenow, Chuck Schumer, and Sheldon Whitehouse, Captured Courts: The GOP’s Big Money Assault on the Constitution, Our Independent Judiciary, and the Rule of Law, Democratic Policy and Communications Committee, May 2020, https://www.hsdl.org/?view&did=839500.

[18] For example, this one on the abuse of graphs (https://capitalresearch.org/article/scales-over-our-eyes-using-graphs-to-frighten-people-about-global-warming/) and another cataloguing the predictions in the New York Times, Harper’s, and other outlets of climate apocalypses, both warming and cooling, in the 1890s, the 1930s, the 1950s, the 1970s, and more recently (https://capitalresearch.org/article/in-1895-climate-alarmists-warned-about-global-freezing-they-havent-stopped-scaring-people-since/).

In the next installment, the dangers of donor disclosure have a long been known.