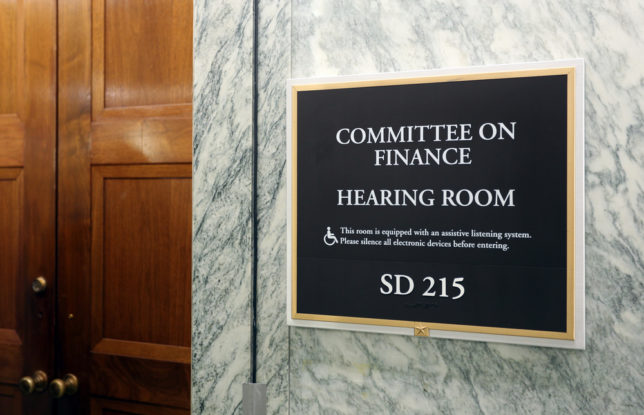 Today, May 4, 2022, Capital Research Center president Scott Walter testified in person before the Senate Finance Subcommittee on Taxation and IRS Oversight. Below are a video and transcript of Walter’s five-minute oral testimony.

The video embedded below starts with Walter’s testimony. Later, at 48:30 in the video, Sen. John Thune (R-SD) uses his five minutes to ask Walter and other witnesses follow-up questions. As usual, Sen. Sheldon Whitehouse (D-RI) refuses to engage Walter and Brad Smith, the expert witnesses invited by the Republicans.

This hearing is very similar to another hearing Senator Whitehouse held in April 2013, one month before the Lois Lerner scandal at the IRS broke. For Walter’s testimony to Sen. Whitehouse last year, go here.

Chairman Whitehouse, Ranking Member Thune, distinguished members of the subcommittee, thank you for the honor of addressing you and for focusing on the critical topic of political activity by tax-exempt groups, which Capital Research Center has studied for decades.

I have numerous agreements with the witnesses selected by the Chairman. For instance, I agree that multiple types of exempt groups must be considered, not just 501(c)(4) so-called “dark money” groups, and that groups across the political spectrum, as Ms. Ravel observes, behave similarly.[1] I second Prof. Hackney’s concerns, stated elsewhere,[2] about the dangers of elite donors working against the common good.

But we have significant disagreements. First, I agree with Professor Smith that donor disclosure is no cure. This supposed remedy presumes that money to a (c)(4)—like the Chairman’s friends at the League of Conservation Voters—is bad if government doesn’t coerce the donors into the limelight. But I don’t think the League’s “dark money” has “captured” the Chairman. I think he receives it because he and the League have shared views of what the social welfare requires.

So disclosure brings little help, but often causes great harm, especially when mobs threaten Americans across the spectrum. That’s why the leading constitutional case in this area is one that protected the NAACP in “Jim Crow” Alabama.[3] To this day, the NAACP defends donor privacy, as does the ACLU and America’s largest LGBT advocacy group.[4] This principle is so important those left-leaning groups joined with a major Koch-funded group to oppose California’s effort to abuse the Schedule B donors list then required on IRS forms.[5]

Disclosure is a weapon, as even your witnesses, Mr. Chairman, at the hearing last year where I had the honor to testify, tacitly admitted. They said if I thought the Left had more “dark money” than conservatives, I should want disclosure. Their logic? Donors and the groups they support are hurt by disclosure, so I should seek it, to hurt the Left. But, “I do not wish to harm donors and groups I disagree with, and I respectfully urge you to end your campaign to harm donors and groups you disagree with.”[6]

Another way I disagree with witnesses today is the excessive emphasis on (c)(4) groups, which is misplaced for several reasons. First, the supposed threat of foreign intervention via (c)(4)s. Professor Hackney spins out ingenious possibilities but is skimpy with actual examples. When I testified to the IRS on its decision to drop Schedule B donor lists for (c)(4)s and other groups, I observed how little evidence exists of this.[7]

I despise foreign interference in our elections, but most likely that rarely happens this way, because no rational villain abroad would look at our political system and think (c)(4)s hold the keys to the kingdom. Look at the money. Statistics can be sliced many ways, but let’s take the largest “dark money” number I can find, the “more than $1 billion” Ms. Ravel has mentioned. She likely was citing a report from the left-leaning OpenSecrets, which estimated $1.05 billion in 2020.[8] OpenSecrets also gave total election spending as $14.4 billion.[9] So “dark money” is about 7 percent.

This ignores the even larger money in the (c)(3) world raised by groups active in “political activity in its broadest sense,” as Professor Hackney helpfully puts it. Capital Research Center doesn’t have complete 2020 data, but for the 2018 cycle, we estimated public policy (c)(3) money at around $20 billion,[10] compared to around $5 billion for “hard” political dollars.[11] “Dark money” is a distant third.

We should focus much more on (c)(3)s. I’m a Catholic not a Manichee, so I don’t think the political spectrum divides all good on one side, all evil on the other. But alas, abuses among (c)(3)s have a strong partisan tilt—leftward toward the Democratic Party.

Just this week Capital Research Center found another example of (c)(3) abuse in a report from Vox, revealing emails from a Democratic-aligned super PAC.[12] Writing donors, the super PAC describes the 2020 cycle’s “single most effective tactic for ensuring Democratic victories—[namely] 501(c)(3) voter registration focused on underrepresented groups in the electorate.” The super PAC even explains the tax advantages: Well-designed (c)(3) voter registration is, on a pre-tax basis, “2 to 5 times more cost-effective at netting additional Democratic votes than the tactics that campaigns will invest in. . . . Because 90 percent of the contributions we are recommending for voter registration and GOTV efforts will go to 501(c)(3) organizations and hence are tax-deductible,” after taxes, “such programs are closer to 4 to 10 times more cost-effective. . . . They are also eligible recipients of donations from donor-advised funds and private foundations.” I ask my fellow witnesses: Do we want this in the (c)(3) world?

These schemes are the culmination of decades of left-wing (c)(3) voter registration abuse. Liberal reporter Sasha Issenberg in his book Victory Lab describes the Carnegie Foundation’s registration and turnout drives: “a backdoor approach to ginning up Democratic votes outside the campaign finance laws that applied to candidates, parties, and political action committees.”[13]

Here let me apologize for a mistake in my written testimony. I said Karl Rove had not used (c)(3)s to do registration and GOTV, only (c)(4)s, but I was wrong: He’s only used 527 groups and party committees, never (c)(3) or (c)(4) money. Mr. Chairman, let me plead with you to find a way to have the Ford Foundation and its (c)(3) allies rise to the level of Karl Rove’s political morality and end their partisan registration work.

[2] Hackney makes his point in a vaguely Marxist way with which I do not entirely agree, yet he echoes the classic American strain of populism that is wary of elites with great wealth and power: “I believe its [referring to the “private foundation community”] predominate ethic is that of Carnegie from The Gospel of Wealth: that the wealthy man is the savior of the rest of us, both in terms of their ability to invest their dollars and to spend them in ways that improve all lives. I think that wrong and harmful.” Philip Hackney, “The 1969 Tax Reform Act and Charities: Fifty Years Later,” Pittsburgh Tax Review Volume 17 (2020): 246, https://doi.org/10.5195/taxreview.2020.116.

[7] To repeat, I excoriate any actual foreign funding aimed at influencing our elections, but because (c)(4)s aren’t a good vehicle for this, the threat seems to be quite small. Hackney’s testimony for this hearing gives not one specific case of foreign influence in an election. His footnotes cite one scholarly article (available at https://scholarlycommons.law.hofstra.edu/faculty_scholarship/1203/), which cites only three cases of “investigations” across a quarter-century, only one of which, involving San Diego mayoral and district attorney races, resulted in a conviction, while another, involving Chinese Communists and the Democratic Party, resulted in the return of campaign contributions and a fine for a religious charity. Neither of those matters involved a 501(c)(4) group. Only the third semi-example does, because it deals with an investigation into the (c)(4) National Rifle Association, but as the article itself admits, the “allegations,” which “led to speculation,” produced as of the article’s publication “no charges or official accusations that the NRA used foreign funds.” This incident has since concluded with no charge against the NRA (although a banker’s assistant pled guilty to acting as a foreign agent without proper registration). The left-leaning Campaign Legal Center also likes to cite this NRA non-event in disingenuous ways, as I noted in my testimony to the IRS as it considered the regulation that eliminated the requirement for most types of nonprofits to file a donors list (Schedule B) with the IRS. Scott Walter, “Testifying Before the IRS,” Capital Research Center, February 7, 2020, https://capitalresearch.org/article/testimony-at-the-irs-hearing/.

[8] Ms. Ravel gives no citation for the number, which appears on the second page of her written testimony. Ravel, written testimony. I presume the number comes from Anna Massoglia and Karl Evers-Hillstrom, “’Dark Money’ Topped $1 Billion in 2020, Largely Boosting Democrats,” OpenSecrets.org, March 17, 2021, https://www.opensecrets.org/news/2021/03/one-billion-dark-money-2020-electioncycle/.