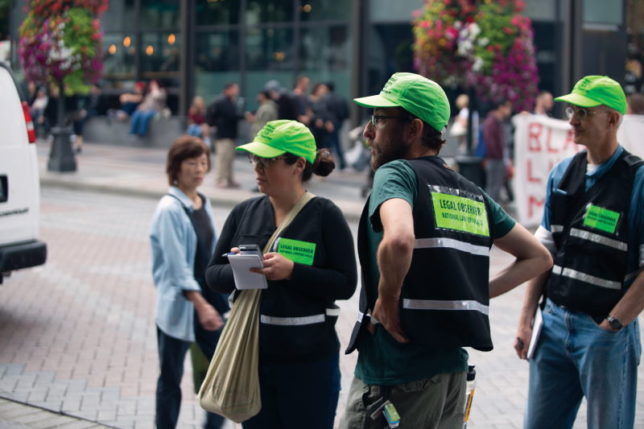 (Legal observers of the National Lawyers Guild) The NLG was active in providing assistance during the protests and riots that occurred in multiple American cities in 2020, largely related to the Black Lives Matter movement. Credit: Tiffany Von Arnim. License: https://bit.ly/3sj02XO.
by CRC Staff

Summary: The National Lawyers Guild is a radical-left association of attorneys, law students, legal workers, and jailhouse lawyers. Since its founding in February 1937, the Guild has consistently been identified with radical-left groups and political orientations throughout its history. In its early years it was significantly influenced by communist members. During the 1960s and 1970s, it supported the Civil Rights Movement, and some of its members were affiliated with extremist groups like the Weather Underground. Today, the National Lawyers Guild is best known for the legal support and training that it provides to left-wing demonstrators, including the Black Lives Matter movement and Antifa.

The National Lawyers Guild is a radical-left association of attorneys, law students, legal workers, and jailhouse lawyers. Founded in February 1937, the Guild has consistently been identified with radical-left groups and political orientations throughout its history.

In its early years the National Lawyers Guild was significantly influenced by communist members, which quickly led to the resignation of most of its non-communist liberal members. The FBI extensively investigated the group, sometimes using illegal methods, and in 1950 the U.S. House Un-American Activities Committee released a report calling it “the foremost legal bulwark of the Communist Party, its front organizations, and controlled unions.”

During the 1960s and 1970s the National Lawyers Guild supported the Civil Rights Movement, and soon after became dominated by a younger membership that was broadly associated with the New Left. It began focusing much of its work on protest support. A few of the organization’s members were affiliated with extremist groups like the Weather Underground. Though there were internal disputes, most members continued to adhere to some form of far-left political orientation.

Today, the National Lawyers Guild is best known for the legal support and training that it provides to left-wing demonstrators. It was active in providing assistance during the protests and riots that occurred in multiple American cities in 2020, largely related to the Black Lives Matter movement. It is also notable for supporting the sometimes-violent Antifa movement.

What became the National Lawyers Guild (the “NLG” or the “Guild”) had its origins at a meeting of approximately 25 lawyers on December 1, 1936. It was conceived as an alternative to the then-conservative American Bar Association, and was intended to serve as a professional association of left-wing attorneys who supported President Franklin D. Roosevelt’s New Deal policies and the priorities of organized labor. Maurice Sugar, a Detroit-based lawyer who would later become general counsel to the United Auto Workers labor union, had been campaigning for such an association for several years and was instrumental in bringing the idea to fruition.

The NLG’s initial members represented a multi-ideological coalition of the American left. Notable early leaders included American Civil Liberties Union (ACLU) counsel Morris Ernst and future Supreme Court justices Abe Fortas and Robert H. Jackson. President Roosevelt knew a number of the Guild’s founding members personally, and sent a letter of congratulations to its founding convention. Indeed, Ernst had reportedly intended for the NLG to function essentially “as the legal arm of the New Deal,” and many of its founding members were active in the labor movement.

Communist Influence and the Liberal Exodus. From the beginning, the NLG attracted many communist members whose politics were far more radical than those of the New Deal liberals. Historian Ellen Schrecker has written that the NLG during this era was “allied with, but not actually run by, the Communist party.” Still, a number of prominent early leaders within the Guild were indeed communists, including labor attorneys Lee Pressman, Maurice Sugar, and Nathan Witt.

In September 1939, general secretary of the Communist Party USA (CPUSA) Earl Browder testified before a Congressional committee that while there were “no relations” between the CPUSA and the NLG at that time, the communists viewed the Guild as one of many “transmission belts” for “having Communists work among the masses in the various organizations.”

Conflicts between the Roosevelt-aligned liberals and the communist radicals rapidly fractured the NLG. In early 1939, Ernst proposed an amendment to the Guild’s constitution that would have formalized the group’s opposition “to dictatorship of any kind, whether Left or Right, whether Fascist, Nazi, or Communistic.” The resolution was not adopted, and NLG leadership “tried instead to paper over the conflict,” according to Schrecker. Tensions only grew after the Molotov-Ribbentrop Pact — a non-aggression treaty containing secret protocols dividing Eastern Europe between the Soviets and Nazis — was concluded between the Soviet Union and Nazi Germany later that year.

Ernst and other liberals attempted to remove communists and their allies from the NLG’s national board, but were unsuccessful. Most of the Guild’s prominent liberal members, including Ernst, had resigned from the organization by mid-1940. Membership dropped from over 4,000 to approximately 1,000 by the time the NLG held its convention that year, and when the newly-elected president and executive secretary traveled to the group’s Washington, D.C. office “they literally had to step over a mailbag full of resignations to enter.”

One prominent liberal who resigned, then-Assistant Secretary of State Adolf A. Berle, Jr., explained his reasoning:

The National Lawyers Guild was formed in the hope that expression might be given to the liberal sentiment in the American bar.

It is now obvious that the present management of the guild is not prepared to take any stand which conflicts with the Communist Party line. Under these circumstances, and in company, I think, with the most progressive lawyers, I have no further interest in it.

World War II. While the Molotov-Ribbentrop Pact was in force from August 1939 to June 1941, the CPUSA followed instructions from Moscow to portray the war between Nazi Germany and the western democratic Allies as an imperialist war in which the United States should remain neutral. Communist publications began equating the supposed evils of Great Britain with those of Nazi Germany, even going so far as to call Great Britain “the greatest danger to Europe and all mankind.”

According to information published in a report by the U.S. House Committee on Un-American Activities, NLG leaders including Samuel M. Blinken, Leo Linder, Edward Lamb, Pearl M. Hart, Abraham Isserman, Maurice Sugar, and Martin Popper all attended the Emergency Peace Mobilization held in Chicago in September 1940, which led to the formation of the American Peace Mobilization (APM).

The APM vigorously opposed American aid to Great Britain, such as the Lend-Lease Act. In a statement from March 1941, the APM reportedly declared that “an English victory will result in the same sort of imperialist, anti-democratic peace as will a Nazi victory.” A later report by the House Committee on Un-American Activities called the APM “one of the most notorious and blatantly Communist fronts ever organized in this country.”

Nazi Germany invaded and occupied Poland in September 1939, setting off World War II in Europe; a Soviet invasion of eastern Poland followed weeks later. By mid-1941, Germany had invaded Denmark, Norway, Belgium, the Netherlands, Luxembourg, France, Yugoslavia, and Greece. The Soviet Union had invaded Finland (which prompted a belatedly announced resolution of opposition from the NLG prior to the mass resignation of its liberal members), Estonia, Latvia, and Lithuania.

After Germany unilaterally terminated the Molotov-Ribbentrop Pact and invaded the Soviet Union in June 1941, however, the war “ceased being imperialistic” in the eyes of American communists. The NLG likewise adopted an interventionist foreign policy. In October 1941 — notably, before the Japanese attack on Pearl Harbor and the subsequent German declaration of war on the United States — the Guild approved an unambiguously pro-war resolution:

The National Lawyers Guild accordingly gives its unlimited support to all measures necessary to the defeat of Hitlerism and to the present Roosevelt policy of ‘all out aid’ to and full collaboration with Great Britain, the Soviet Union, China, and other nations resisting Fascist aggression and to all further steps necessary for the military defeat of Hitlerism.

The NLG was thereafter supportive of the Allied war effort, though it also continued to advocate for left-wing domestic social policies. In 1942, the Guild’s national executive board adopted a statement urging the western Allies to quickly open a second front in Europe in order to relieve the pressure that German armed forces were putting on the Soviet Union. In 1944, it produced a report on strategies for prosecuting Nazi war criminals, including anticipating and rebutting arguments that certain defendants would likely make, and in 1946 several NLG lawyers were involved in the Nuremburg Trials.

The Postwar Years and Taft-Hartley. Membership growth during the war had been steady, and by early 1947 the Guild had approximately 2,500 member lawyers and 500 affiliated law students. At its 1946 national convention, the NLG’s social legislation committee produced a platform entitled “Program of Basic Protection for the American People,” which set forth a series of proposals on full employment, rent control, housing, and social security.

The NLG argued against many of the foreign policy positions taken by the United States during the early years of the Cold War. It opposed the North Atlantic Treaty Organization (NATO), the Marshall Plan to provide redevelopment aid to postwar Western Europe, and the Truman Doctrine of containing the expansion of international communism. The Guild advocated for close cooperative relations between the United States and the Soviet Union in the aftermath of the Second World War.

The NLG vigorously opposed the Taft-Hartley Act enacted in 1947, with the chair of the NLG’s labor law committee testifying against it. In the Guild’s view, Taft-Hartley “instantly erased” many of the advantages organized labor had enjoyed over the previous 15 years. One provision of the act required union officers to sign affidavits that they were not communists; according to an official history of the Guild, “[a]s a direct result of Taft-Hartley, the labor movement soon ‘purged’ itself of radical leadership.” NLG attorneys at major unions like the Congress of Industrial Organizations, the United Automobile Workers, and the National Maritime Union lost their jobs.

In the next installment, the National Lawyers Guild willingly represents communists during the McCarthy era.