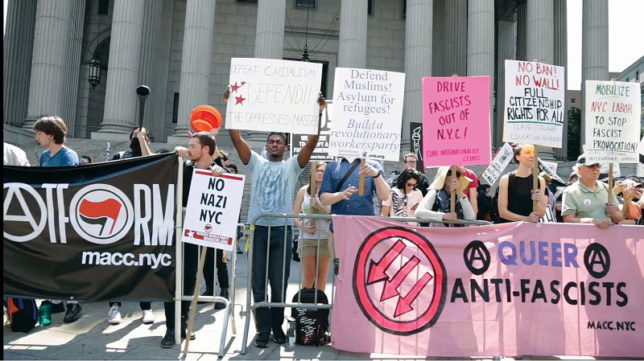 Officers from the NLG’s San Francisco chapter have also written in support of Antifa, saying in an article entitled “We are all antifa” that portraying it as violent “is a dangerous effort eerily reminiscent of the left-baiting that accompanied the Nazi rise to power.” Credit: Deep Dish TV. License: https://bit.ly/3KPlp9x.
by CRC Staff

The NLG generally espouses a radical-left ideology. Its objective is “to function as an effective force in the service of the people by valuing human rights and ecosystems over property interests.” The Guild describes itself as anti-capitalist, anti-imperialist, and anti-racist, and as “dedicated to the need for basic change in the structure of our political and economic system.” In a 2015 fundraising appeal, the NLG said to prospective donors: “This holiday season, don’t fund capitalism, fund the groups working to dismantle it.”

Associated Groups. The NLG has student chapters at over 100 American law schools, and it operates a Radical Law Student Project with the goal of “changing the practices, pedagogy, and expectations of law school in order to transform the culture of legal education.” The NLG Scholars network consists of dozens of law professors and practicing attorneys who are also Guild members.

The National Police Accountability Project is a separate nonprofit, though on its website it is also identified as a project of the NLG. It promotes policies and legislation that it views as enhancing police accountability.

The National Immigration Project of the National Lawyers Guild is another independent nonprofit, though it likewise remains closely associated with the NLG. It specializes in immigrant incarceration and deportation proceedings, including advocacy on behalf of illegal immigrants.

Radical Policy Positions. The NLG describes itself as a political organization and is broadly antagonistic towards all levels of government in the United States. It has passed resolutions declaring that the federal government “is based on and dedicated to preserving white supremacy, hetero-patriarchy and imperialism,” and claiming that the NLG has “the right and the responsibility to help build a culture of noncooperation and resistance in opposition to the State.”

The NLG supports dismantling and abolishing all institutions “where people are held against their will”—including prisons, jails, and immigration detention facilities—and advocates for the “release of prisoners serving life without parole and other inhumane sentences.” In 2020, the Guild passed a resolution calling for “the defunding, dismantling and abolition of all forms of policing,” stating that police accountability was impossible because police are only accountable “to the white supremacist, capitalist, settler colonial state.”

Other policy positions adopted or embraced by the NLG include “non-collaboration with grand juries,” support for extensive abortion rights, divestment from fossil fuels, ending the “illegal occupation of the Hawaiian Islands” by the United States, and the payment of reparations for slavery by federal, state, and local government entities.

The NLG was highly critical of the Trump administration, which it described as a “fascist” presidency. It organized “critical legal support infrastructure” for protesters against President Trump’s 2017 inauguration, including facilitating jail visits and legal representation for those who were arrested. The NLG later called for prosecutors to drop all charges against more than 200 individuals who were arrested under felony riot laws at the protests.

In an article from December 2017, the NLG’s director of research and education Traci Yoder argued that opposition to the Trump administration needed to be focused not simply on specific political issues, but rather function part of a broader opposition to “the free market, anti-regulatory stance informed by neoliberal economic policies” that his administration had adopted. According to the article, “the role of the Left must be to challenge these policies as well as the neoliberal commonsense that dominates our lives, and which prioritizes the maximizing of individual rights and wealth over collective well-being.”

Mass Defense and Legal Observer Programs. The Mass Defense Program, through which it provides legal training and support for participants in left-wing movements and protests, is a major part of what the Guild does. This includes training volunteer legal observers to attend demonstrations, monitor and document the activities of law enforcement, and provide support for protesters who are arrested, including connecting them to legal defense and bail funds. The NLG will only provide legal observers for causes “that directly align” with its values.

In 2020, during the wave of protests and riots largely related to the Black Lives Matter movement, the NLG claimed to have helped organize legal representation and attorney referrals for approximately 20,000 arrested protesters. In doing so, it worked closely with the far-left Movement for Black Lives and Law for Black Lives, as well as with the Center for Constitutional Rights. The NLG was highly critical of police response to the widespread unrest, calling it “unwarranted and excessively violent.”

After former Minneapolis police officer Derek Chauvin was convicted of murder in the killing of George Floyd, the NLG released a statement asserting that “policing is an inherently violent, racist institution that cannot be reformed.” In June 2021, the Guild sent a letter to the Biden administration demanding that it drop all federal charges against more than 350 demonstrators who had been arrested over the course of the Black Lives Matter protests, writing that the “prosecutions were intended to stifle dissent and protect white supremacy.” Approximately 90 organizations signed the letter.

Support for Antifa. The NLG is notable for supporting the far-left radical and sometimes violent Antifa (short for anti-fascist) movement. In his 2021 book Unmasked: Inside Antifa’s Radical Plan to Destroy Democracy, journalist Andy Ngo describes the Guild as “in effect…the legal arm of Antifa.” According to Ngo, the NLG’s Portland chapter has used its Mass Defense resources to pay the bail of individuals arrested at Antifa-associated riots. The Wall Street Journal has reported on how NLG organizers have discussed protest tactics with self-described Antifa members.

A 2017 article written by the NLG’s director of research and education entitled “Legal Support for Anti-Fascist Action” promised that the Guild “will continue to support anti-fascists and anti-racists in the street and in the courts, and will not be swayed by the argument that hateful, dangerous speech should be tolerated at any cost.” In addition to the NLG, the article identified the Southern Poverty Law Center and Political Research Associates as nonprofits that “have important roles to play in research, analysis, and legal support for anti-fascist movements.”

Officers from the NLG’s San Francisco chapter have also written in support of Antifa, saying in an article entitled “We are all antifa” that portraying it as violent “is a dangerous effort eerily reminiscent of the left-baiting that accompanied the Nazi rise to power.” They promised that “the National Lawyers Guild won’t stand by as fascists and white supremacists seek to take power in the streets and halls of government. We stand in solidarity with all who fight hatred. We will continue to show up, to defend activists who challenge fascism, and we call on all people of conscience to do the same.”

In June 2020, the NLG issued a statement opposing then-President Donald Trump’s call to designate Antifa as a domestic terrorist organization. The Guild’s Mass Defense director stated that doing so was “merely an attempt to criminalize ordinary people who are exercising their right to protest.”

In the next installment, the guild operates as a 501(c)(4) nonprofit organization with 50 local chapters and funding from left-wing institutions, including the Tides Foundation.