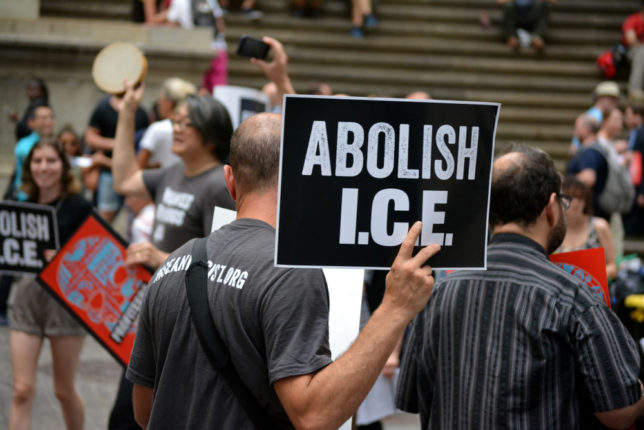 Rare is the labor union that breaks formally from “social justice unionism,” the broad-spectrum ideology that leads the “industrial or economical class organizations with less hours and more wages for their motto” to support left-wing causes ranging from abortion to gun control to critical race theory.

What happens when one of those rare unions is subordinated within a larger union that signs up to social justice unionism is about to be discovered. The Washington Times reports that the National ICE Council, a labor union of immigration enforcement agents, seeks to disaffiliate from its parent, the American Federation of Government Employees (AFGE).

The principal sticking point is political: The leadership of National ICE Council, which has a history of endorsing Republicans in congressional elections, argues that by supporting left-wing politicians who have endorsed the “Abolish ICE” movement, the parent union “openly campaigns to have the jobs of its members eliminated.” Further, the council leadership argues:

When it will benefit AFGE politically not to support ICE dues-paying members, or when any chance exists that support of ICE employees could be perceived negatively by the administration or congressional Democrats, AFGE will not support its members in the ICE Council or its Locals. Such conflicts of interest have occurred under previous Democrat administrations.

Whatever one thinks of law enforcement unions (I am a skeptic), one has to feel for the ICE agents whose dues and per-capita tax payments are supporting activist groups through AFGE and the AFL-CIO (of which AFGE is a constituent union) that are targeting their own employment.

To conservatives forced to accept union representation in the private sector in the 23 states that allow compulsory union fees, this will all sound morbidly familiar. In states without a right-to-work law—if the Biden administration and House Democrats get their way, that would be all of them—unions can force dissenting workers to pay a certain proportion of fees in lieu of dues or be fired. (Federal unions like National ICE Council and, since Janus v. AFSCME, all state and local government worker unions are forbidden from compelling union fee payments as a condition of employment.)

For those workers who do not support the social justice unionism pursued by the AFL-CIO and the national labor union movement, the effects—supporting one’s own adversaries—are like those felt by the National ICE Council.