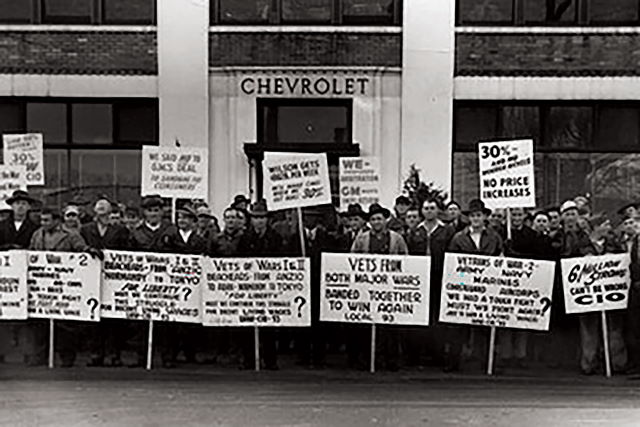 Right-to-work laws in 27 states forbid closed shops, in which union membership and fees are mandatory.

How Open and Closed Shop Rules Have Worked Since 1947. All or nearly all union contracts under National Labor Relations Act–style compulsory monopoly bargaining contain a provision known as the “union security clause.” The clause guarantees the union’s position as the negotiating representative and sets the conditions for union dues collection. Most relevantly, it establishes whether the shop is “open” or “closed.” An open shop means that those workers who dissent from union membership are not required to pay union fees to support the union’s demand for monopoly bargaining. A closed shop means the union may demand the employer fire any worker who does not pay the legally allowed forced dues.

A great deal of litigation has established what “legally allowed” means. In its simplest terms, the union in a closed shop may require nonmembers to pay only their pro-rata share of the costs of representation and cannot demand the employer fire a nonmember who refuses to pay for the union’s lobbying or political campaign activities. However, the union determines what expenses are “chargeable.” The National Right to Work Legal Defense Foundation has a long record of winning cases in court and before the NLRB on behalf of workers against unions that included the costs of lobbying or other non-chargeable activities in the mandatory payment.

But in 27 states, the chargeability debate is moot because the states have what a “right to work” law that applies to the private sector, as explicitly authorized by Taft-Hartley. In these states, the “closed shop” is forbidden; the only compensation due a union for its monopoly representation of unwilling workers is the monopoly power, not the unwilling workers’ money. (Since the Supreme Court’s Janus v. AFSCME decision, the entire government sector nationwide has been de facto open shop/right-to-work.)

How Big Labor Wants It to Work. For Big Labor, the closed shop debate is a simple one: They get more money from a closed shop than an open shop. Unions have battled state-level right-to-work laws with a mixture of success. In Missouri, facing an under-resourced defense of the right to work, unions successfully overturned it. Unions failed in the 27 current right-to-work states, some of which have unitary Democratic control at times.

By banning right-to-work legislation, the PRO Act would make collecting forced dues easy for the Big Labor allies of the new administration and congressional leadership. It would require the closed shop nationwide—at least in the private sector. The Supreme Court is unlikely to reverse its Janus decision so quickly.

Consequences. The simplest consequence would be a surge in forced dues collections from workers forced to accept union-monopoly representation who do not wish to be unionized or do not support union political and advocacy agendas in the 27 states that have right-to-work laws at present.

But that is not the only way cash rules everything around modifying shop rules. Combined with the other provisions that would expand the union-monopoly model throughout the economy, union officials’ eyes will see plenty of dollar signs from their new unwilling charges.

The Taft-Hartley Act permits unions to encourage boycotts of or strikes against an employer in direct dispute with the union, but not against customers or unrelated employers.

How Strike Rules Have Worked Since 1947. Among the lesser-known but crucial provisions of the Taft-Hartley Act was the extension and delineation of “unfair labor practices” from employers alone to unions as well. Pro–union labor scholar Steven E. Abraham described one potential effect of this change on a union organizing campaign:

Unions . . . had been able to do things such as make false promises regarding previous success elsewhere, call employees names such as “scab” and “union buster” if they opposed the union, and refer to rival unions as “weak and incompetent.” These statements were prohibited by [citation to provision of Taft-Hartley].

Among the critical changes was a restriction on the targets of boycotts or strike actions. Unions were and are permitted to encourage boycotts of or strikes against an employer with which union members are in a direct dispute (or, with time limitations, seeking to organize). But due to the potential for disruption to the broader economy and for labor racketeering, Congress proscribed strikes and boycotts targeting “neutrals”: customers or other unrelated employers merely doing business with the employer disputing with the union.

This is best illustrated with a hypothetical example. Consider the UAW striking against Ford for higher wages. This is a legally protected primary strike (most likely a primary economic strike). But suppose the UAW were to strike against the MGM Grand to coerce the casino to stop buying Fords until the Ford strike ended. That would be a forbidden secondary strike.

How Big Labor Wants It to Work. Big Labor desires power, and the secondary strike is a massive reservoir of power if Congress allowed Big Labor to tap it. The PRO Act would lift all restrictions on secondary boycotts and secondary strikes, giving Big Labor—already bolstered with increases in forced membership and forced dues—the power to call strikes for whatever purpose it wished.

Consequences. Labor activists are frank about why they want secondary strike powers. Before he became a reporter for the “objective” Bloomberg News, labor organizer Josh Eidelson put it succinctly for the socialist website Working In These Times: “Secondary targets make for soft targets.”

Other left-progressive organizations are enthusiastic users of secondary boycott, especially for “woke” cultural advancement. Media Matters demands that advertisers (the secondary target) drop Fox News (the primary target) whenever one of its hosts says something the liberal advocacy group doesn’t like. Gun control organizations promote boycotts of companies that have agreements with the National Rifle Association. The NRA, not the boycotted company, is the primary target. Often, these entities capitulate because they do not have as much at stake as the primary target and they want the activists to just go away.

In the next installment, note the deepening alliance between organized labor and the Left.