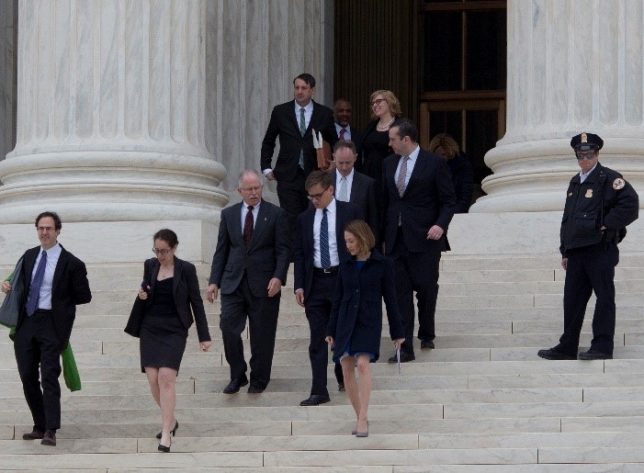 When did you first start questioning your union membership or the American Federation of State, County and Municipal Employees (AFSCME) leadership?

Janus: I questioned the lack of choice I had from the beginning of my employment with the State of Illinois. From 2007 to 2018, I worked as a child support specialist for state government in Illinois. I quickly realized that fees were being deducted from my paychecks and being paid to AFSCME.

I had no choice in the matter and no power to stop my hard-earned money from going to a political organization.

My concerns became even more acute as the state of affairs in Illinois continued to decline. Here we were facing a huge unfunded tax liability, a corrupt government that was completely unproductive, and union leaders were doing nothing to stop our state’s tailspin. Rather than be part of rational and fiscally sound solution to our state’s financial mess, AFSCME’s leadership was suggesting state workers strike!

Why bring the suit against AFSCME?

Janus: I was represented by AFSCME in my job title as a child support specialist. AFSCME represents approximately 35,000 Illinois government workers. Nationally, they are a powerhouse of government-sector unionism. Here I was paying these forced “agency fees” to a union I didn’t feel was representing me or my fellow workers. Nor did it appear they were listening to us.

I was told by a co-worker, who was a full share member, of a local meeting held at the beginning of the contract negotiations. Almost all the members in attendance told the leadership not to ask for any major increases in wages or benefits. The rank and file members knew the state was in a precarious financial position. How could they ask for raises when the state had such major deficits and couldn’t pay its bills?

But of course, AFSCME ignored members’ wishes. The union asked for about $3 billion in wage and benefit increases. Why pay fees to an organization that doesn’t even listen to the people they represent?

How did you know the time was right to raise this issue?

Janus: Bruce Rauner had filed a case against AFSCME and other unions when he became governor of Illinois. I was also seeing a push by AFSCME to increase wages and benefits by about $3 billion. With our tenuous pension and budget situation, I just felt I had to do something. I could see the overall situation was not getting better for Illinois.

Add the financial climate of the state on top of the complete powerlessness I felt. I knew it was not right for the state of Illinois and AFSCME to be collecting fees from me to support an organization I did not agree with. My frustration grew as I watched the dollars come off my paycheck week after week, year after year.

How did you feel after Rebecca Friedrichs’ case failed to overturn Abood?

Janus: I was disappointed. I was in Washington, D.C., and heard the oral arguments of her case. I had the great fortune to sit with Rebecca’s husband Charles in the gallery. Prior to the proceedings, we had a lengthy and fruitful discussion on numerous topics while waiting in line for the oral arguments. We became good friends because of that chance meeting in the cold and gray early morning hours.

After hearing the arguments in Rebecca’s case, I felt optimistic there would be a positive outcome to her case. I thought Abood would be overturned and my case would become moot. But, you can never be assured of a victory in the U.S. Supreme Court, no matter what the pundits may say.

When I heard the news of Justice Scalia passing, I was surprised like so many others. I was disappointed not only for the family of Justice Scalia, but also for Rebecca. She worked hard to bring this case along with the other nine plaintiffs.

Rebecca’s loss also energized me. I knew my case would be important and a second chance to take on the important issue of worker freedom.

In the next segment of his interview, Marc Janus tells CRC how his colleagues reacted to his suit.