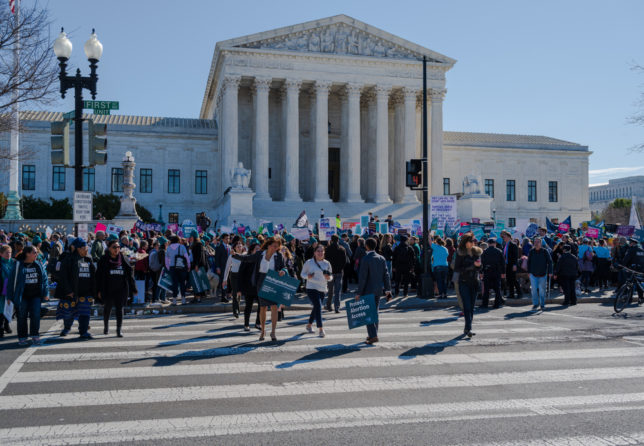 Last week, Politico reported on a leaked draft of a Supreme Court opinion that would overturn Roe v. Wade and return the question of abortion regulation to the states, ending the Court’s invention of a constitutional right to abortion. The draft opinion was greeted with predictable outrage from left-progressives, including those in organized labor.

Now, many people, especially those on the social-conservative right who are re-exploring aligning with organized labor, might not expect union bosses to be among the left-progressive leaders ready to jump on a leaked, not-finalized Supreme Court opinion, but they were. Examples include:

I Told You So

These statements and other pro-abortion activities by organized labor, such as SEIU Healthcare Illinois/Indiana rallying with Illinois Gov. J.B. Pritzker (D) and Planned Parenthood or the new Amazon Labor Union calling for protests in New York City, demonstrate that American labor unions are inseparable from social left-progressivism through an ideological practice known as “social justice unionism.” Back in 2021, we published a serial outlining how organized labor provided financial support to Washington State measures introducing Planned Parenthood–aligned sex education material into public school curriculums.

And what of the expressed hope of Sen. Marco Rubio (R-FL), that union organizations could provide a counterweight to “a requirement that the workers embrace management’s latest ‘woke’ human resources fad”? Well, I was skeptical, noting that “operatives who run the labor unions endorse woke H.R. fads. And to the extent they don’t, they support going even further.”

Now, I may enter into evidence the statement of Sara Nelson, head of the flight attendants’ union AFA-CWA and rumored candidate to challenge Shuler for the leadership of the House of Labor, last seen campaigning to extend the now-enjoined traveler mask mandate when it came up for renewal in March. Nelson explicitly called on her members’ bosses to engage in woke capitalism:

We call on airline management to stand with us and for equality, anti-discrimination, and mutual respect. It is not enough that corporations espouse these principles as core to their missions—now is the time to demonstrate this commitment to their employees and passengers. This is about our safety and our freedom. We cannot work if we are not safe.

Social justice unionism means that organized labor is an additional pressure point forcing capitalists to be woke, not a point of opposition. The reaction to the Supreme Court leak should prove that beyond doubt.