Humanitarian Crisis on the Border: How We Got Here 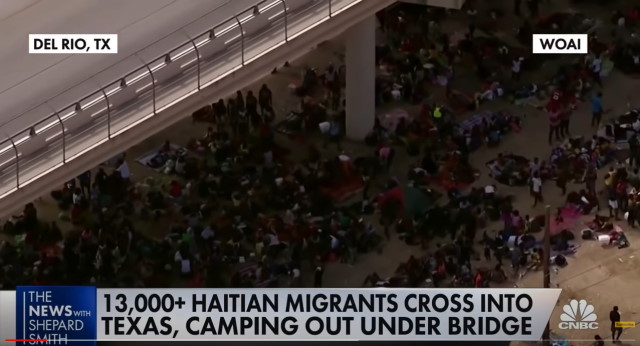 More than 13,000 Haitian migrants camping out under a bridge near Del Rio, Texas, September 17, 2021. Credit: CNBC/YouTube. https://youtu.be/qTEumnwS9YQ.
by CRC Staff

Beyond the Biden administration’s string of unforced errors that have helped create and exacerbate the crisis on the U.S. southern border are organizations and people using the migrants as pawns to achieve their political objectives.

CRC researchers have tracked some of the money and influencers (organizations and people) who have helped create this humanitarian disaster. Below is a review of relevant CRC publications:

The demand for immigration reform may have been one key to Donald Trump’s victory in the 2016 election, but a decade ago the Left was leading the charge to overhaul America’s immigration system.

The now-defunct lobby Reform Immigration for America (RIFA) was central to that campaign. It was a coalition of some 800 left-wing groups that emerged after Barack Obama’s victory in 2008. RIFA hoped to build an echo chamber around the new Democratic majority in both houses of Congress to pass a broad immigration package, including citizenship for the roughly 12 million illegal aliens nationwide.

Arguably, it failed because it was competing with Health Care for America Now, another echo-chamber coalition ginned up by the professional Left.

Three U.S.-based organizations—Pueblo Sin Fronteras, La Familia Latina Unida, and the Centro Sin Fronteras—appear to have played key roles in organizing and otherwise assisting the “caravans” of immigrants. Following the money trail appears to lead back to George Soros’s well-funded Open Society Foundations, which are trying to advance his Open Society ideas throughout the world. Much is unknown and uncertain about their involvement, but it deserves thorough investigation.

The Unaccompanied Alien Children Program (UAC Program) exists to fulfill HHS’s statutory obligation to care for minors without legal immigration status and who are unaccompanied by a parent or guardian. Typically, they are transferred to HHS custody after being detained by the Department of Homeland Security. It’s an interesting program to examine for a number of reasons, not the least of which is that it can’t really be “cut” in the traditional terms one might apply to the federal budget. Children—whatever their immigration or citizenship status —need to be accounted for, cared for, and reunited with their families if possible, for obvious reasons.

“The Open Border Activists Behind the Illegal Immigrant Caravans” by Hayden Ludwig, October 24, 2018.

A vast network of foundations, non-profits, government entities, and political organizations have a vested interest in the continued growth of the resettlement of refugees in America. Because they receive billions of dollars in federal grant money, publicly financed, tax-exempt organizations have significant incentives to support political candidates and parties that will keep these programs alive. These organizations need to be thoroughly audited and the current network of public/private immigrant advocacy and resettlement organizations needs to be completely overhauled. Resettling refugees should be a voluntary, genuinely charitable activity, removing all the perverse incentives government funding creates.

Donald Trump burst onto the scene as a Presidential candidate gripping one of the “third rails” of American politics: immigration. Using harsh rhetoric against existing immigration policy, which he accused of being soft and unsound, Trump seized the Republican nomination and won the Presidency. Meanwhile, his opponent, Hillary Clinton, tiptoed around the question of whether the United States and other developed countries should have any effective immigration regulations whatsoever.