The demand for immigration reform may have been one key to Donald Trump’s victory in the 2016 election, but a decade ago the Left was leading the charge to overhaul America’s immigration system.

The now-defunct lobby Reform Immigration for America (RIFA) was central to that campaign. It was a coalition of some 800 left-wing groups that emerged after Barack Obama’s victory in 2008. RIFA hoped to build an echo chamber around the new Democratic majority in both houses of Congress to pass a broad immigration package, including citizenship for the roughly 12 million illegal aliens nationwide.

Arguably, it failed because it was competing with Health Care for America Now, another echo-chamber coalition ginned up by the professional Left. This product of hundreds of labor unions and DC insiders successfully cajoled Congress to pass Obamacare in March 2010, and then it shut down. But a zombie HCAN was later revived to defend Obamacare as part of Arabella Advisors’ “dark money” network.

Only a month after Obamacare passed, Obama told reporters that there “may not be an appetite” in Congress to tackle immigration. A compromise effort was tried again in 2013 with the “Gang of Eight” bill—which was sharply criticized by both conservatives and liberals—but it failed in the House of Representatives. Although Obama declared immigration reform the main priority for his second term in office, by 2014 the Washington Post had declared the issue effectively dead until a future administration could tackle it. Four years later, RIFA closed shop and promptly disappeared from the internet (and public memory) altogether.

But RIFA is interesting as a case study of how the professional Left orchestrates mass political action, which I’ve suggested was first perfected by Margaret Sanger and her coalition of socialists, eugenicists, and white supremacists in the early 20th century. RIFA’s strategy was ripped from the playbook of professional activists and funded complete with millions of dollars from a shadowy offshore foundation.

Brainchild of the Professional Left

RIFA was never a standalone nonprofit. From 2009 to early 2010, it was a project of Tides Advocacy, the 501(c)(4) arm of a collection of nonprofits known as the Tides Nexus. The oldest of these groups—the Tides Foundation—dates back to the 1970s, and they’ve been central to the development of professional leftist activism. Tides performs two roles: passing money from mega-donors to activists behind a veil of anonymity and spawning new 501(c)(3) activist groups through a process called fiscal sponsorship. Tides Advocacy provides these services to the Left, using its tax-exempt status to incubate new 501(c)(4) groups—nonprofits that are allowed to spend significantly more of their budget on lobbying than their 501(c)(3) counterparts.

As a project, RIFA was not required to file an annual Form 990 with the IRS. Its budget, staffers’ salaries, and board oversight (if it had any) were all internal to Tides Advocacy. In effect, RIFA was a tentacle of Tides and wholly unaccountable to the public while it lobbied for sweeping changes to America’s immigration system.

Although that relationship to Tides is never advertised on RIFA’s (now archived) website, lobbying reports indicate that Tides Advocacy (doing business as RIFA) spent $500,000 lobbying Congress in 2009–2010 for “comprehensive immigration reform,” although the specifics are unknown. (Notably, it’s also virtually the only money Tides Advocacy has spent on congressional lobbying in its nearly three-decade existence.) 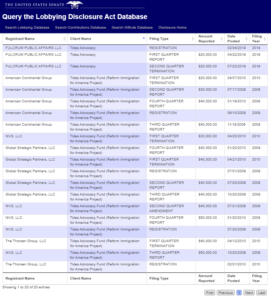 As befits the brainchild of professional activists, RIFA’s pressure campaign was announced on July 4, 2009, in a Huffington Post op-ed by Frank Sherry, founder of the pro-illegal immigration outfit America’s Voice:

President Obama has committed himself to immigration reform and now is the time that we should hold him, members of Congress and ourselves accountable for getting this critical legislation done this fall.

In June 2009, RIFA held a three-day summit in Washington, DC, to train activists in lobbying and community organizing. Representatives from major pro-illegal immigration group and other pillars of the Left were present:

The summit was organized by the Center for Community Change, a prominent agitation group that absorbed RIFA from Tides Advocacy sometime in early 2010, according to the group’s archived privacy policy, controlling it until RIFA’s quiet dissolution in 2018.

Gauging what came of that lobbying is difficult, but certain mega-donors clearly saw huge potential in RIFA’s campaign. In 2010, the Bermuda-based Atlantic Philanthropies gifted Tides Advocacy $5 million for RIFA’s campaign to “advance reforms to the U.S. immigration system” and “to ensure policymakers at the state and federal levels are attuned to Latino voting power and its immigration policy objectives,” using its Delaware-based 501(c)(4), the Atlantic Advocacy Fund.

Around the same time, Atlantic Philanthropies was attempting to overhaul America’s immigration system, it was also funneling $27 million to Health Care for America Now to pass Obamacare and fundamentally change the U.S. health care system. As a foreign foundation, it doesn’t file Form 990 reports with the IRS.

Atlantic Philanthropies still brags about its role in bankrolling numerous immigration campaigns from 2004 to 2014 to the tune of $70 million. According to a 2015 report (archived here), liberal U.S. foundations joined the effort:

Atlantic made grants directly and the campaigns re-granted funds to more than 70 immigration advocacy organizations. The Atlantic Philanthropies has not acted in a vacuum; it has been a part of a vibrant funding community including organizations such as the Ford Foundation, Unbound Philanthropy, the Carnegie Corporation of New York, the Hagedorn Foundation, [George Soros’] Open Society Foundations, and many others.

In fact, Atlantic Philanthropies credits itself with birthing RIFA. According to the report, it gathered 15 key activists (led by Frank Sherry of America’s Voice) from the Coalition for Comprehensive Immigration Reform, RIFA’s predecessor and the architect of a failed echo-chamber campaign that nearly passed an immigration reform bill in 2007. The activists outlined four pillars for its successor campaign, Reform Immigration for America, but each pillar is more in tune with a politician’s campaign than a charity:

According to the report, “civic engagement work focused on registering more Latinos to vote and getting them to the polls, as well as studying what does and does not work in regards to Latino voter registration.” That also involved gathering 1.7 million email addresses, social media profiles, and phone numbers—usually the practice of political campaigns and political consultants—which Atlantic Philanthropies calls RIFA’s “main legacy.”

In addition to Obama’s support, the fact that both houses of Congress were controlled by Democratic legislators signaled the opening of a very promising opportunity window. Atlantic applied a lot of pressure in the field to concentrate funding within RIFA to lock in federal legislative change as the focus of immigration reform efforts. [emphasis added]

Earlier in 2012 Atlantic staff had consulted with a wide variety of immigration reform stakeholders . . . and had decided to make a sizeable, $3.9 million short-term investment to promote civic engagement among Latino voters and their allies. The investment was multifaceted, providing support for developing a Latino voter strategy, mobilizing voters across the US, deploying RIFA’s online grassroots organizing capacity to bring attention to the Latino vote, and developing a national media narrative linking the Latino vote to immigration reform.

The goal of the timely cash infusion was to demonstrate the formidable Latino vote and to prove that the immigration reform field had mobilization power that could be brought to bear on federal immigration reform. This effort was thought to impact the Republican Party and cause it to take the issue of immigration more seriously.

Atlantic and others were pleased with the outcome—in fact, the high turn-out of the Latino vote was a top story for many news outlets following President Obama’s reelection. One individual said that “that’s the best role Atlantic can play: to show politicians that the Latino vote has to be reckoned with.” [Emphasis added]

Foreign money intended to change policy and sway U.S. elections is the very definition of “dark money,” the liberal money-in-politics crowd has been largely silent.

Reform Immigration for America proves that the professional Left is very good at faking grassroots activism, coordinating swarms of activists to push a single issue on Congress. Perhaps it’s too good, considering another echo-chamber—Health Care for America now—may have ruined RIFA’s illegal immigration campaign. In an alternate 2020, we might be documenting its success—and the defeat of Obamacare and HCAN.

RIFA may have disappeared from view, but the Left’s desire to weaponize foundations and tax-exempt charities to win elections and push its policies is more powerful than ever. If open-borders radicals take the White House and Congress in November, RIFA will likely rise from the grave once more.