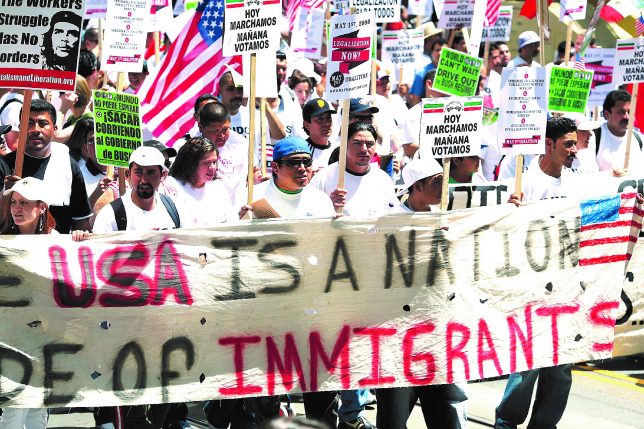 Immigration reform advocates “transformed what was a very hostile environment into a public discourse with the space for the human rights of immigrants to be respected and the value of immigrants to be acknowledged,” the reports states, repeating their rhetorical trick. This self-congratulation just keeps going: Atlantic’s 501(c)(4) funding “enabled organizations to be engaged in political and electoral processes with the capacity to impact immigration reform.” (Most of the $70.3 million pro-immigration war chest came from The Atlantic Advocacy Fund (AAF), a 501(c)(4) nonprofit discussed in greater detail later in this piece.)

“As a 501(c)(4), AAF is able to make grants that enable other social welfare organizations to more fully engage in the political process, including undertaking activities such as educating legislators and the public on issues related to their missions and expressing support for or in opposition to legislative proposals,” the report continued.

Getting to the heart of the matter, the report put it this way:

Although AAF did not permit its grants to be used for partisan activities, the funds it awarded for immigration reform provided greater opportunities for organizations working on this issue to have an impact by engaging directly with possible allies and organizing advocates both during and between elections. Having access to these funds provided advocates with a more comprehensive toolkit of options to engage with the opposition and pursue a strong legislative strategy. All three campaigns funded by Atlantic (CCIR, RI4A, and A4C) have used their 501(c)(4) designations to strengthen pro-immigration reform and to engage in a more sophisticated legislative battle.

Out of the $70.3 million pool, $49,815,250 went to “other organizations within” Atlantic Philanthropies “federal immigration reform strategy.”

Here is where that nearly $50 million was spent:

(Source: “Advocacy, Politics & Philanthropy: A Reflection on a Decade of Immigration Reform Advocacy”)

Using the 501(c)(4) platform, Atlantic Philanthropies contributed more money than any other donors active in funding immigration reform efforts from 2004 to 2014—according to the “Advocacy, Politics & Philanthropy” report. This method of funding “allowed for a more defined and powerful legislative strategy.” According to an unidentified source quoted in the report, the 501(c)(4) funding worked wonders:

By mobilizing voters and being able to focus on electoral politics, 501(c)(4) funding enabled advocates to exert more influence over legislators in their districts. “The ability to be effective…comes from having [501(c)(4)] funding. One of the keys to our movement’s success is that the political class is now convinced…that Latino, Asian, and [other] immigrant voters…care deeply about immigration.

Whether immigrant voters actually do care deeply about immigration is beside the point. In politics perception is reality, as the old adage goes.

The 501(c)(4) funding “was perceived by advocates as resulting in legislators taking them more seriously and listening more closely than they had previously,” which helped make immigration reform “a gateway issue.” The report continues:

The 501(c)(4) monies “enabled advocates to leverage the power of the electorate to take a stronger stance and influence politics. Advocates were able to keep political pressure on elected officials through civic engagement activities designed to mobilize the Latino voter base. The combination of having a unified advocacy strategy, mobilizing the base, and getting the message out enabled the field to elevate the issue of immigration reform and change the public discourse.”

In the final installment of Dark Money Ascendant, we examine the strategic advantages of Atlantic Philanthropies planned spend down.