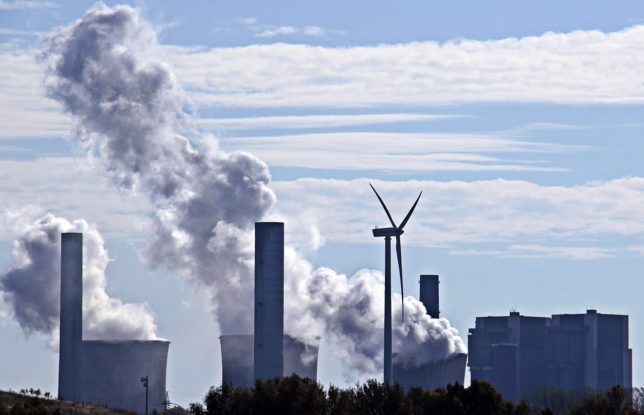 The radical Green New Deal introduced in February by democratic socialist Rep. Alexandria Ocasio-Cortez (D-NY) may have flamed out in the Senate after it voted 57-0 against the measure, but some see its supporters’ rush to the left as an opportunity for a Republican carbon tax proposal.

“The Green New Deal gives Republicans and conservatives space so that they can . . . point to a solution that they can support,” former Republican Rep. Carlos Curbelo, a prominent carbon tax supporter, told Time in February. Heather Reams, executive director of Citizens for Responsible Energy Solutions (CRES), agreed: “This is an opportunity to articulate a vision.”

But as I wrote last October, there’s nothing “conservative” about a carbon tax that would target the fuels which provide some 85 percent of America’s energy. Nevertheless, a “conservative” carbon tax remains the undying dream among moderates eager to strike a grand bargain with environmentalists over a supposedly revenue-neutral, Earth-saving tax on carbon dioxide emissions.

Reams and her group, Citizens for Responsible Energy Solutions, are among the moderates who continue to promote a Republican carbon tax. In March, Reams denounced the Green New Deal as ridiculous before urging conservatives to craft global warming legislation of their own. “Republicans need to step up,” she said, “[and] start talking about what they’re for, instead of what they’re against. And they need to do that, like, ASAP.”

To that end, the group supports the Green Real Deal Resolution (H. Res. 288) introduced by Florida Rep. Matt Gaetz (R) on April 3, an effort by some Republicans to present an alternative to the Democrats’ Green New Deal.

But like the Green Real Deal itself, Citizens for Responsible Energy Solutions has a problem: both accept the premise of the environmental Left’s argument that global warming is a real, manmade threat to the U.S. and the environment. As CRC’s Dr. Steven J. Allen has pointed out, advocates of global warming theory take it as “an article of faith that Earth’s climate was stable for thousands of years until modern society, with its factories and coal-fired power plants and SUVs, ruined everything.” But this view ignores the drastic changes caused by real, natural climate change—not manmade global warming theory.

That’s the case with Citizens for Responsible Energy Solutions, which shows its wholesale adoption of the Left’s political vocabulary when the group references “greenhouse gases,” “carbon footprints,” “clean energy,” and “renewable energy.”

These aren’t scientific terms; they’re emotional terms meant to sway people to support leftist goals through fear and fake “scientific” credentials. For example, Citizens for Responsible Energy Solutions advocates for a voluntary federal framework for tracking—and ultimately lowering—carbon dioxide emissions. In effect, this tracking is structured to lead to some kind of carbon tax by ceding authority to regulate emissions to the federal government.

And make no mistake about that regulation—Citizens for Responsible Energy Solutions has made its desire to reduce carbon output clear, calling for policies which “lower emissions” by “transforming carbon into a commodity.”

Tracking carbon emissions may sound innocuous, but it serves one purpose: paving the way for federal carbon pricing schemes, probably in the form of a carbon tax or cap-and-trade bill. After all, the group wrote in December, “you can’t manage what you don’t measure.”

And they’re right. Considering the environmental Left’s widespread support for regulating emissions, it’s hard to imagine that ostensibly harmless “tracking” wouldn’t lead to taxing producers on each ton of carbon dioxide gases (among others) emitted annually in order to reduce their so-called “carbon footprint.”

Citizens for Responsible Energy Solutions sells its tracking framework as the free market way “to further drive down emissions and mitigate climate change,” calling such schemes “conservative solutions.” But carbon taxes aren’t conservative—they’re a product of the anti-free market Left, which uses apocalyptic language to massively increase government power. Carbon taxes are just one means of achieving that level of control.

In October, Citizens for Responsible Energy Solutions lauded the U.S. for lowering “greenhouse gas emissions” to their lowest levels since 1991, attributing that reduction to so-called “clean energy solutions”:

Hybrid cars are commonplace, electric vehicles are on the rise, homes and businesses are more energy efficient than ever, and utilities across America are providing renewable power on demand to corporate and residential customers.

But that’s only half true. The U.S. leads the industrialized world in reducing carbon dioxide emissions, yes—because of fracking, not Ford Fusions. Thanks to an incredible increase in natural gas production—largely through fracking—U.S. emissions declined in seven out of the past 11 years, according to the U.S. Energy Information Agency. Far from being an outmoded form of energy, so-called “fossil fuels” are leading Americans into the kind of cheap energy, low-carbon renaissance unheard of just a decade ago.

To its credit, Citizens for Responsible Energy Solutions—unlike the eco-Left—endorses investments into natural gas as a less carbon-intensive alternative to coal. But Citizens for Responsible Energy Solutions itself has disturbing connections to the professional Left. The 501(c)(4) advocacy group was created in 2013 with $1 million in total startup funding from two 501(c)(4) nonprofits: The Advocacy Fund and the Trust for Energy Innovation.

The Advocacy Fund (formerly Tides Advocacy) is the action arm of the Tides Foundation, a left-wing mega-funder. In 2016, the Fund spent $9.6 million, much of it on grants to left-wing advocacy groups including the League of Conservation Voters, Sierra Club, and the union-aligned Working Families Organization. The Trust for Energy Innovation is more obscure. The group doesn’t have a website, but data from the website CitizenAudit shows the group earned $3.9 million in 2015 and gave grants to the Natural Resources Defense Council Action Fund, League of Conservation Voters Action Fund, and Bipartisan Policy Center Action.

CRES was founded by board president James Dozier, who served as executive director until he was replaced by Reams in January 2019. Dozier is a former Republican congressional staffer turned gay marriage activist. From 2009 to 2012, he was deputy political director of the Gay & Lesbian Victory Fund, a nominally “nonpartisan” PAC that helps openly gay, lesbian, and transgender candidates win public office. In effect, this amounts to aiding Democrats: in the 2016 and 2018 elections, the Victory Fund exclusively funded Democrats.

Prior to that, Dozier was a program officer for the Gill Action Fund, the now-defunct advocacy arm of the Gill Foundation, a grantmaking foundation with over $226 million in assets that primarily funds LGBT issues. Gill Action Fund reportedly shut down in 2017 and hasn’t filed with the IRS since 2014, though its reason for closing is unclear.

In May 2018, Guerriero called Civitas “bipartisan,” probably because it employs a handful of ex-staffers for Republican politicians. Guerriero himself is the former head of the Log Cabin Republicans (a gay and lesbian faction within the GOP) who left the Republican Party in 2010 to become a political independent.

But calling the company “bipartisan” stretches the word. Other Civitas staff are overwhelmingly products of the Left, coming from the Obama administration, the agitation group EMILY’s List, NARAL Pro-Choice America, Planned Parenthood Action Fund, the NAACP, and GLSEN, which pushes gay and lesbian education in K-12 schools.

So it’s a real stretch to expect that Citizens for Responsible Energy Solutions—a group pushing environmentalist policies and very closely connected to a left-wing firm—is the conservative group that it claims to be. Were Citizens for Responsible Energy Solutions truly conservative, it would call a carbon tax what it really is: another scheme ginned up by Big Green.