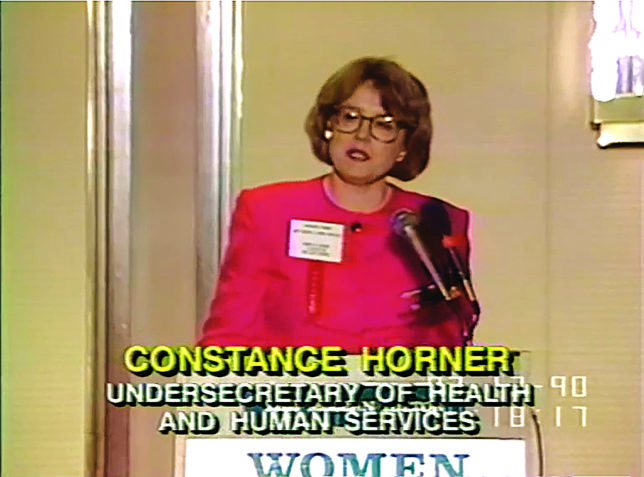 Some trustees continued to have concerns about the Casey Foundation’s relentless leftward drift, and in 1994, added Constance Horner to the board. Horner recalled that she was added to the board because “they wanted someone with a social welfare background” who could help them determine which grants were leftist and which ones weren’t. Credit: C-SPAN/Screenshot. License: https://cs.pn/2lCMLcW.
by Martin Morse Wooster

The Casey Foundation has made many changes since it began actively giving grants in the late 1980s. One of the most significant changes took place in 1999, when UPS, in the largest initial public offering of the 20th century, raised $5.47 billion by selling 199 million shares of class B common stock, while retaining class A shares (which have a majority of voting rights) for employees and retirees. The move added $1.75 billion to the Casey Foundation endowment.

As a large organization, the Casey Foundation is involved in many program areas.

Here are two of them: Casey’s emphasis on “family preservation” and the role it has played in Baltimore since the foundation moved there in 1994.

For over a quarter of a century, the Annie E. Casey Foundation and the Casey Family Programs have stressed as a goal of their public policy programs the idea of “family preservation,” The idea is that, as far as possible, children in troubled families should grow up in those families rather than in foster care. The Casey Family Programs website says the goal of their foundation is to “safely reduce the need for foster care by 50 percent by the year 2020.” They say the aim is to have case workers supervising a limited number of clients and that these case workers should be on call at all times (including the middle of the night) in case of trouble.

The policy is known as “family preservation,” which has been enthusiastically supported by the Annie E. Casey Foundation and Casey Family Programs for nearly 30 years. Lawyer Dennis J. Saffran, in a 2018 article in City Journal, notes that “these taxpayer-funded services” for family preservation, “including payment of housekeepers to cook, clean, and shop for abusive or neglectful parents—were often extraordinarily generous, well out of the financial reach of other poor or even middle-class families.” Sociologist Richard J. Gelles, in The Book of David (1996), notes that family preservation became a key priority of the Casey Foundation in the 1990s, when Casey, allied with the Edna McConnell Clark Foundation and the Children’s Defense Fund, ensured that family preservation became very popular.

“When the believers” in family preservation “are foundations who can invest millions of dollars each year in touting the programs,” Gelles wrote, “and when the critics are academics who merely publish their research results in scholarly journals, the outcome is entirely predictable. State and local agency heads, legislators and legislative aides, governors and presidential administrations were told about the unqualified successes of family preservation and the tremendous cost savings. The skeptics and critics were either unknown or cast as merely academic gadflies.”

The problem with “family preservation” child-protection policies is what to do with parents who harm or even kill their children. In 1997, Congress thought family preservation went too far and passed the Adoption and Safe Families Act, which mandates that courts terminate parental rights if a child is in foster care for 15 out of 22 months or if a parent is found guilty of manslaughter or murder.

The response of the Annie E. Casey Foundation and Casey Family Programs, allied this time with American Humane—better known for its animal welfare work—was “differential response” (DR), which would divert 70 percent of the potential cases monitored by child protection agencies into a track where problematic parents wouldn’t be closely monitored. The argument is that most of these cases involved technical violations, such as caseworkers finding that a parent’s home isn’t clean.

But Harvard Law School professor Elizabeth Bartholet, in a 2015 law review article, says that Casey-backed differential response won’t help children in trouble. She also questions Casey’s emphasis on reducing foster care programs, because she says that foster care remains the best option “to protect children against the risk of death and other serious harm at home. It would work better for children if more often it was followed by timely termination of parental rights and adoption. Adoption works well for children, generally, but it works best when they have not suffered lengthy periods of maltreatment or foster drift.”

William and Mary law school professor James G. Dwyer, in his 2018 book Liberal Child Welfare Policy And Its Destruction of Black Lives, argues that Casey Family Programs is “ideologically committed to drastic reduction of the foster care population.” He charges that Casey Family Programs is one of a group of “liberal actors, dominant in the child welfare arena” who have “demanded that state governments adopt, as an explicit goal, reducing the number of black children in foster care—not, improving black children’s wellbeing, but simply more black children remaining in parental custody after maltreatment reports or returning quickly after removal to parents who abused or neglected them.”

In a 1994 interview with the Baltimore Sun, Casey Foundation president Douglas Nelson said that while Greenwich was a comfortable place to work, “We asked ourselves, ‘Is this a place that’s relevant to our work we are doing?’ We thought not.” By contrast, he said, Baltimore “is a location that seemed to make more sense for our work.”

Being in Baltimore has meant that the Annie E. Casey Foundation has become one of the two largest foundations in Baltimore, along with the Harry and Jeanette Weinberg Foundation.

The Casey Foundation regularly contributes to Baltimore-based nonprofits as part of its funding. In 2015, in the wake of riots after the death of Freddie Gray, the Casey Foundation donated $5 million to various Baltimore-based nonprofits that said they would help the city recover after the riots. Since then, the foundation has contributed at least a million dollars more in grants to programs designed to provide jobs for Baltimore teenagers.

In 2016, the Open Society Institute-Baltimore, the Casey Foundation, and Maryland Gov. Larry Hogan’s Office for Children created the Baltimore School Climate Collaborative, which has awarded $27,000 in small grants to Baltimore public schools and distributed thousands of brochures telling students to come to class every day and get enough sleep before they come to school.

In 2017, the Open Society Institute-Baltimore, the Casey Foundation, and the city of Baltimore created Safe City Baltimore, a $500,000 legal defense fund designed to provide legal aid for immigrants, including helping American-born children of immigrants acquire passports and providing legal assistance for aliens about to be deported.

The Casey Foundation continues to donate to Open Society Institute-Baltimore. The most recent contribution data on the Open Society Institute-Baltimore’s website is for 2016, where the Casey Foundation is credited with a donation of between $100,000 and $499,999. Only the Bloomberg Philanthropies, which contributed over a million dollars that year, made a larger donation.

Casey’s most substantial project is its investment in East Baltimore Development Inc. (EBDI), an effort to clear and rebuild an 88-acre parcel near the Johns Hopkins Hospital. The Baltimore Sun, in a 2016 editorial, admitted that critics of the plan call it “a forced gentrification project from the bad old days of urban renewal.” The development, begun in 2002, is far from complete.

“The partners in EBDI—Johns Hopkins, the City of Baltimore, and the Annie E. Casey Foundation … have been careful not to call it ‘urban renewal,’ Siddhartha Miller reported in The Guardian in March 2018. “Still, the venture is a bit of a throwback to the old slum-clearance days.”

The funding for EBDI is so complicated that public officials contacted by Baltimore’s legal newspaper, The Daily Record, in 2011—including then-city council president and current mayor Bernard “Jack” Young—could not explain how much the project cost or who was paying for it. The Daily Record estimated that the Casey Foundation had contributed $63.5 million to the project. No more recent estimate of total Casey Foundation spending on EBDI exists. The foundation donated $1.27 million in 2015, fifteen million in 2016 and fifteen million in 2017. Other foundations have also contributed, including the Atlantic Philanthropies, which gave EBDI $925,000 in grants.

When Casey announced EBDI in 2002, planners highlighted the thousands of jobs the project would create for East Baltimore residents. Although some jobs have been created in a new Marriott that opened in 2017, as well as a Walgreen’s and a Starbucks, most of these jobs have not materialized.

Even after 17 years, EBDI has a long way to go before the project is complete. But the Casey Foundation, the city of Baltimore, and Johns Hopkins have to do a great deal of work to counter community concerns that EBDI is a project that pushes out the poor to aid the middle-class and the rich. Fewer than 10 percent of the 740 families displaced when demolition began in 2002 have returned, and Morgan State professor Lawrence Brown told the Guardian that the project was “gentrification, a big institution pushing out a vulnerable community for its benefit.”

One side effect of EBDI is that the Casey Foundation has become expert on “responsible demolition” or “deconstruction” of urban areas, and the foundation has published several reports on the topic. (One lesson: make sure you remove lead paint from an old house before you tear it down.)

In the conclusion of Foundation Adrift, find out more about the Annie E. Casey Foundation’s Future.