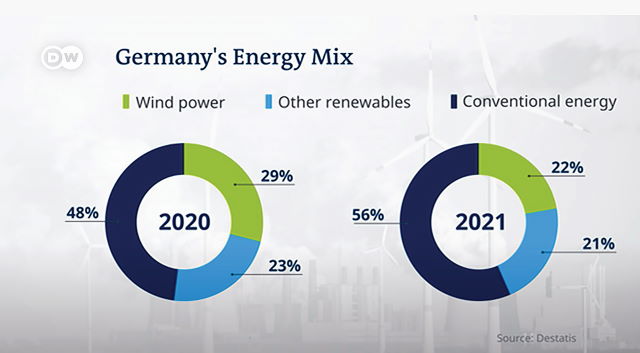 At least Germany, the “green man of Europe,” still supports natural gas. What happens when eco-activists in the U.S. declare even that off-limits? Credit: DW News. License: https://bit.ly/3jnoRxo.
by Hayden Ludwig

In Virginia, the most recent addition to this cap-and-trade system, the state’s energy economy is the picture of success painted by moderate environmentalists 20 years ago. Almost 60 percent of its electricity is generated from natural gas and another 30 percent from just two nuclear power plants, which have operated safely for over four decades, carbon-free.

Imagine trying to power the state on wind turbines and solar panels, which together account for less than 7.3 percent of the Old Dominion’s electricity production.

If that sounds crazy, it should. Yet that’s exactly what the environmental Left proposes for the entire country. If activists want to eradicate all natural gas—like it aims to abolish oil, coal, nuclear plants, and dams—what does that mean for household electricity bills?

Renewable energy mandates from Virginia’s Democratic-controlled legislature have already helped to spike household electricity prices by 4 percent since 2020, from 11.91 cents to 12.4 cents/kWh. Yet that’s piddling next to the world’s “greenest” economy: Germany.

Still Looking for a Place in the Sun

Despite spending billions, those sources together account for only 26 percent of the country’s power production. Yet Germany already has the highest electricity rates in the world at 37 cents/kWh, higher than even the priciest “green” U.S. states. A renewables surcharge accounts for a stunning 23 percent of German electricity bills. As one commentator puts it:

Renewable energy advocates like to say we should be a lot more like Germany when it comes to generating more electricity from wind and solar. This argument often goes like this: “Wind and solar are already less expensive than fossil fuels, and greedy corporations are the only reason we don’t have a clean energy revolution!!!”

My question for people making this argument is, “If renewables are so gosh-darn cheap, why does Germany now have the highest electricity prices in Europe?”

The unexpected cold snap in February 2021—when temperatures hit 5°F—rendered tens of thousands of solar panels and turbines frozen stiff and useless, leaving Germans dependent on the country’s remaining coal and nuclear plants running at full capacity to (barely) keep the lights on. At least 20 homeless people died, making it one of the deadliest winters in recent years in one of the world’s most resource-rich nations.

High winds also threatened structural failure of ice-coated, overloaded power transmission infrastructure, creating the possibility of a cascading blackout across the already unstable European power grid, as occurred in 2006 when a downed German powerline led to outages as far away as Portugal and Greece.

Now the country is desperately looking to expand imports of liquefied natural gas via oil-burning container vessels in order to weaken its dependence on Russian gas pipelines, which supply 50-60 percent of Germany’s natural gas. The lesson for Americans, Clemente notes, is that eliminating coal and nuclear has only made gas “more essential.”

At least Germany, the “green man of Europe,” still supports natural gas. What happens when eco-activists in the U.S. declare even that off-limits?

Yet unbelievable as it sounds, “electrify everything” is the watchword of today’s environmentalists. Dozens of groups are demanding forced electrification policies.

The Sierra Club is leading the charge with a $74 million anti–fossil fuel campaign, equivalent to 47 percent of the group’s total budget in 2019. The group has a fundamentalist approach to combating America’s “dirtiest energy sources,” a message it began with coal and has since expanded to natural gas.

The Sierra Club and another environmentalist group, the Colorado-based Rocky Mountain Institute, have declared cooking with gas verboten because stoves can generate pollutants leading to respiratory illnesses, so every appliance must be all-electric. Both are heavily funded by the ClimateWorks Foundation, a pass-through set up by the liberal Hewlett and Packard Foundations.

At least one group—Evergreen Action—stands to gain financially from this transformation. The group is a front for the Sixteen Thirty Fund, part of a $715 million “dark money” network run by the left-wing consultancy Arabella Advisors. We’ve traced at least $250,000 from the Hewlett Foundation to Evergreen.

Evergreen demands a national reconstruction mandate to retrofit buildings against the threat of global warming. The Green New Deal proposed a similar mandate to “retrofit every building in America.” It’s a union handout, since the contracts would go to Big Labor, but there’s also billions of dollars at stake for construction firms and consultants in unnecessary government giveaway. Bracken Hendricks, Evergreen’s founder, runs one of the consulting firms which stand to cash out from the policies he demands: Urban Ingenuity, which “provides innovative solutions to develop and finance advanced energy projects, building retrofits, and state of the art clean energy infrastructure” to construction developers.

Great work, if you can get it.

Rewiring America is another Arabella-run campaign to remake the economy, a front for the Windward Fund. Rewiring America calls for a World War II–style mass mobilization to make war on ourselves, abolishing carbon-emitting energy sources and electrifying everything. Co-founder Saul Griffith admits that he’s a “science-y engineer,” not an economist, but promises that his plan for providing federal “climate loans” to retrofit buildings will triple U.S. energy production. Proving that left-wing foundations will fund just about anything, Rewiring America has received at least $300,000 from the Rockefeller Brothers Fund.

In the next installment, environmentalists’ objective of a “net-zero carbon” is a recipe for disaster.