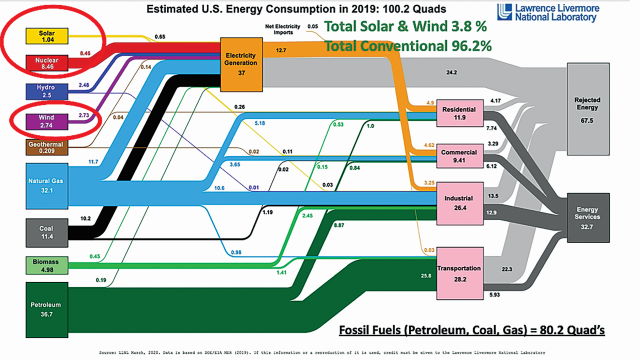 Dick Storm, a registered professional engineer with 50 years of experience in the energy industry, writes about the “stupidity” of trying to run a modern economy on “net-zero carbon” emissions. Credit: Dick Storm. License: https://bit.ly/2Xvy9j7.
by Hayden Ludwig

“Net-Zero Carbon”: A Recipe for Disaster

Activists point out that the transportation and electricity generation sectors together account for 54 percent of the country’s greenhouse gas emissions. Turning them carbon-free would dramatically lower total U.S. emissions—hence, mandates for electric vehicles and non-nuclear renewables.

That’s true in the sense that the 14th century Black Death dramatically lowered medieval European emissions by killing 200 million CO2-exhaling people. In other words, some medicines are worse than the disease, and most folks won’t want to swallow what the Left is prescribing.

Dick Storm, a registered professional engineer with 50 years of experience in the energy industry, writes about the “stupidity” of trying to run a modern economy on “net-zero carbon” emissions. He calls the idea “insane, foolish, and simply not possible . . . unless our standard of living and productive capacity as a nation are severely compromised.”

Storm believes that Green New Deal–type plans for decarbonizing America hinge on electrifying homes and vehicles. “There are huge challenges to ‘electrifying everything’” given just how much energy we use annually, he told me.

“A slow transition to EVs [electric vehicles] can be easily handled, since only about 4 percent (11 million) vehicles on the road are electric,” he explained. “But a rapid transition of the entire transportation sector”—such as the radical Left proposes—“would mean that our electricity generation would have to drastically increase to accommodate the 28 percent of energy needed by transportation and 12 percent used by residential buildings.”

In other words, the country would almost overnight need to produce vastly more electricity on the grid to power those additional planes, cars, trucks, and home appliances. I asked him about the likelihood of states funding this extreme overhaul of existing infrastructure. “If they’re relying on renewables other than nuclear, not likely,” he said.

Building so much extra power-generating infrastructure is expensive and a waste of money and resources. But it becomes impossible if natural gas is banned. (Recall that carbon-free nuclear energy is off the table for most activists given their decades-old opposition to nuclear plants.)

Even if this massive construction project is completed, the turbines won’t produce anything once the wind stops blowing at the 7–9 miles per hour minimum that most turbines need to produce electricity—a frequent occurrence. The traditional backup source for these weather-dependent “unreliables” is natural gas, which kicks on when they shut off to balance demand on the grid. Without backups, the grid would certainly fail. New York state already gets 50 percent of its electricity from gas—so what happens when it’s banned?

The bottom line, as Storm sees it, is that too many politicians have been sucked into a misguided war on carbon, “completely missing a commonsense approach to improving power generation while cleaning the environment in a logical, methodical way producing domestic oil and gas and remaining energy independent. A practical approach would include all fuels, especially new nuclear plants.”

Regrettably, consumers have almost no one in their corner fighting these mandates. “Don’t expect electric utility companies to oppose the mandates since they force increased electricity production and therefore sales, while added costs can be passed along to customers.”

The Biden administration has already set a goal to force the electricity sector to reach net-zero carbon dioxide emissions by 2035, which means generating an additional 4 trillion kilowatt-hours (kWh) largely from wind turbines and solar panels, which currently produce only 10.7 percent of the country’s electricity. Biden’s infrastructure bill, which as of writing has passed the Senate with bipartisan support and is stuck in the House, would allocate $148 billion to achieving that and other climate goals.

If you’re the Chinese Communist Party, that’s music to your ears. Chinese companies currently manufacture close to 30 percent of the world’s wind turbines and a whopping 71 percent of all solar panels in the world, making communist China the industry’s largest country of origin for the Left’s favorite “clean energy” sources.

Since the U.S. manufactures just 10 percent of global wind turbines and only 3 percent of all solar panels, it’s really a mandate to buy Chinese goods—much of them produced by enslaved Muslim Uyghurs—shipped on oil-burning cargo ships. All of this is an effort to make Americans feel better about their carbon footprint.

In the next installment, people are starting to fight back.