Dinesh D’Souza Meets His Critics: In the Reagan White House 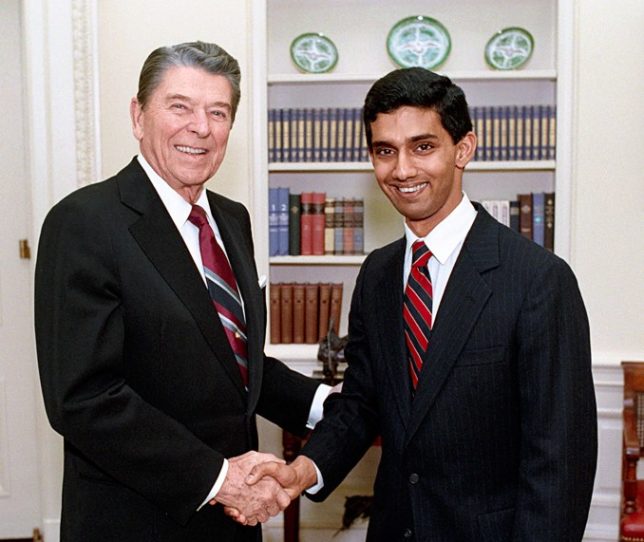 In the Reagan White House

WALTER: Well speaking of party politics, back in the Reagan Administration you served on Reagan’s Domestic Policy Council at the White House as we mentioned. Is there anything that you learned about how the White House operates that would shine a light on the current presidency.

I mean the White House is a sort of a quarterback, you might say. You have all these cabinet agencies which are sort of rival fiefdoms. And if a typical problem arises, let’s say drugs, it’s interesting to see how the Defense Department will classify this: “Well, it’s a problem of you know, the drugs growing in Colombia. It’s a defense problem.” Then the Health and Human Services Department will say: “No, no, it’s actually a health problem. It needs a medical solution, and that’s going to be kind of our purview.” Then, the Education Department says, “Actually, the problem of drugs is that there’s a demand for drugs, and so people need to be educated about drugs, and that’s kind of our domain.” And this is all on the same side, on the Republican side, competing fiefdoms all pulling public policy issues in their own direction. So it’s just fascinating for me to see this organism called government and how it does a few things well, but it does most things very badly, very inefficiently. This is just as true, by the way, of the Defense Department as it is of the Post Office.

Think about the Post Office. We’ve had we’ve had airplanes for over a hundred years, and yet if it had not been for UPS or FedEx, the Post Office to this day would not have figured out that it could deliver overnight mail. That’s because they don’t think that way. There’s no profit motive. There’s no reason to think in terms of making things more efficient or better. In fact, to the degree you do and you use technological solutions, you are only eliminating the jobs of the people who are there. So the mentality of government is totally different.

One of my best career decisions, I think, was not to stay in government and become a sort of professional or habitual bureaucrat—even though I learned a lot from the Reagan White House and I could have gone into the White House under George H.W. Bush. I think I got very good career advice from the head of AEI, then a man named Chris DeMuth, to come to AEI to develop a field of knowledge, write books that would establish my own reputation—in other words, establish a presence in the private sector, even though initially in the nonprofit sector. And that would stand me in better stead in the long run.

In the next installment of “Dinesh D’Souza Meets His Critics,” recap his debates with Christopher Hitchens.