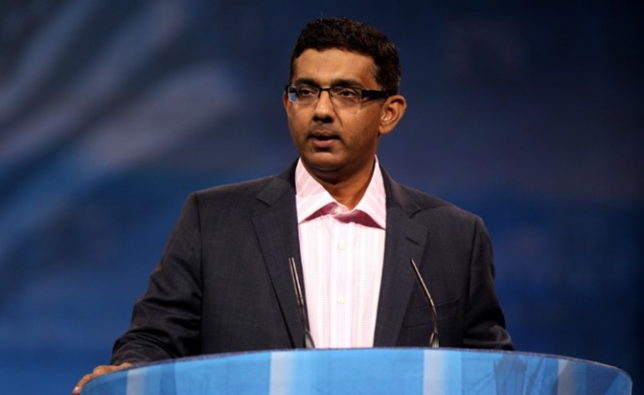 SCOTT WALTER: Hello, I’m Scott Walter, the president of Capital Research Center in Washington, DC. I’m very pleased today to be here with my old friend Dinesh D’Souza. Dinesh, of course, is famous for his many books. The very first one was on the New York Times bestseller list for weeks and weeks, and almost all the rest have been as well. He is also known for making a number of documentaries, including some of the highest grossing documentaries that have ever made—certainly the highest grossing documentaries ever made by someone on the conservative side.

DINESH D’SOUZA: Yes, we go back to a little after my college days really and the very start of my career. So it’s really been fun to see how things have gone through the years. Of course, the world is very different now, and I’m glad to see you’re doing well. And I’m excited to do this interview with you.

WALTER: Well, my idea for the interview is that you are reasonably skilled as a debater. In fact, our mutual friend Christopher Hitchens once confessed to me that he thought you were the best of the many people who ever debated him on the atheism questions.

So I thought it would be a fun interview to have Dinesh D’Souza meets his critics. So I will be the devil’s advocate and throw at you some of the nastiest criticisms that I could find of your last several movies and books.

I have to admit that it’s not hard to find very bitter criticisms of you, and since I have been in editing and writing in the public policy world for all those decades now, I definitely have noticed a tendency among writers and pundits to be highly jealous of other people’s success. So I’m sure part of the bitterness comes from the fact that, given that your critics are so much smarter than you, it really is outrageous that your books sell better, and you make movies that set box office records. That’s a very bitter thing for your “superiors” to bear. So try to be patient with them.

DINESH D’SOUZA: Well, Scott, as you know, I started out in very much the same world that many of these critics inhabit. I spoke in their language, and I was part of their circle. But I made a decision, partly driven by just a reflection upon my own career, but also partly by circumstances—my infamous case with the Obama Administration involving campaign finance violations. I came to a different understanding of what the other side is about and the way that it operates and the way that it fights. As a result, I modified my approach.

So it’s not really a departure from kind of the old Dinesh. But rather it is a modification of tone. It’s also a modification of format. In other words, I make movies as well as write books. I still do the old thing, but I also do some new things, and part of what, I think, is going on is that critics don’t realize that a new format requires a new approach. I actually sound different on Twitter than I sound in a debate.

A movie is not the same thing as a book. Fundamentally, a good book is an argument. So a book exists in the mind of the reader, but a movie is a narrative. It’s an emotional story. Now you can pack a lot of information in a movie, but if you think of a movie as sort of messaging or you think of a movie as sort of five reasons for this or that, you miss what movies are. And you actually miss why people go to the movies, which is primarily for entertainment. People go to movies to feel a certain way, and they read books to think a certain way.

So I’ve tried to adapt my work to these different outlets, and part of the confusion and even some of the vitriol is based, I think, on a misapprehension of this simple fact.

WALTER: Well, I certainly think there need to be more conservatives telling stories through movies and songs and other things because we do a very good job of statistics and dry argument. But we do we hardly even attempt the telling of stories in compelling ways.

D’SOUZA: Yes, the Left is actually the other masters of narrative. And what they do is build, what to my mind are sort of bogus narratives, but they do develop a narrative—you have to give them that.

And so to take the small example of George Floyd, they take the case, the incident involving George Floyd, and they don’t make what what to us would seem the obvious inference. The obvious inference is, hey, if you think the George Floyd was mistreated by this cop, you would want an approach that says how do we get fewer bad cops and more good cops. There’s no obvious jump to a separate conclusion to defund the cops, because defund the cops depends on a hidden premise, which is that something about cops including black cops that makes them racist.

And then on top of that you have further ambitious claims that these cops are racist, not because there’s racist cop training per se but because they’re part of a racist society, a racist education system, a racist culture, and that this chronic racism goes back not just to 1776 but 1619 to invoke the New York Times’s 1619 Project.

So this is a narrative. It’s a storyline. Now it cannot be countered by isolated facts because ultimately a narrative is not a fact. It is an interpretation of a fact. It’s a situation of various facts into a coherent story line. And very often we—our side, conservatives, Republicans—do not present counternarratives. In other words, if American history isn’t that way, what way is it? This is now the driving force of my work: to try to combat false narratives with true narratives. And true narratives require you to tell a story as well as to situate facts within it.

In the next installment of “Dinesh D’Souza Meets His Critics,” observe how intertwined Progressivism and Fascism are.