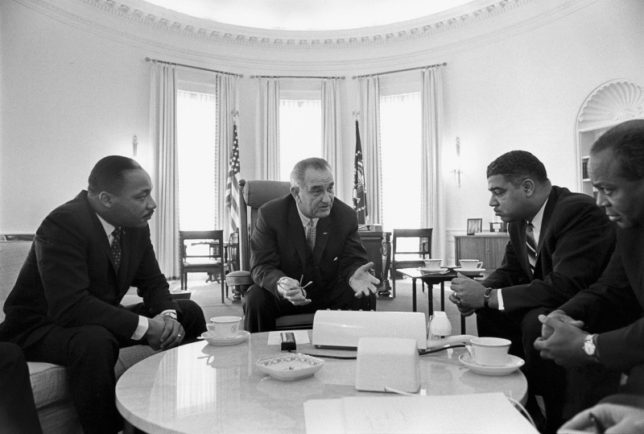 WALTER: The greatest downfall of many conservative intellectuals is refusing to challenge the premises of the other side. They simply accept them and then try to make the arguments with one-and-a-half hands tied behind their back.

D’SOUZA: Well, I think the other thing is that a lot of my work is difficult because the spade work that would make it easy is not done by other conservatives. For example, let’s take LBJ. Lyndon Johnson, it is very clear, routinely used the n-word after he signed the Civil Rights Act of 1964. In a memoir, Lyndon Johnson’s driver said that he asked Johnson to call him by his name, and Johnson said, “Absolutely not. I’m going to call you Chief, or I’m going to use the n-word,” and he basically said get used to it. And this was Johnson. There multiple sources—historians: Robert Caro in his book master of the Senate, Doris Kearns Goodwin, and others—who have all documented this. Notice that these are progressives documenting that LBJ used the n-word. If that is so, then the whole leftist narrative that LBJ underwent a moral evolution from his early racist days in rural Texas to becoming an enlightened champion of civil rights [is false]—a narrative extremely important to the Left because it mirrors their story about the whole Democratic Party that it evolved LBJ style toward Enlightenment.

Now the bunking of this narrative is of extreme importance, and you would think that there would be a half dozen critical conservative biographies of LBJ that would really dig into this to show that LBJ had racist reasons for signing the Civil Rights Act of 1964 and what those reasons were. But in fact there is no such biography. No conservative in the entire country has taken on himself or herself the labor of saying you know what for my PhD thesis on my first book, I’m going to dive into LBJ. I’m going to look at all the stuff that Caro didn’t look at. I’m going to look at all the stuff that’s not in the progressive biographies because the progressives do not hesitate to leave massive things out, especially things that are inconvenient to their side.

WALTER: Well one more question on the you might say is the business model of the Dinesh D’Souza empire. This is Variety, the Hollywood newspaper. They’re nice enough to say that you’re not the only one who’s this deplorable—lots of conservatives apparently are. So their claim is:

The more that mainstream journalists go into high dudgeon over [Dinesh’s] lies and mudslinging, the more that he can feed the bonfire of the culture war. It’s the formula that was put in place 30 years ago by right-wing talk radio, and that Fox News honed to a crude edge of firebrand theatrics: If your agenda is to stoke resentment and create cartoon enemies, then you don’t need to be accurate.

D’SOUZA: Well, I’ve tried to think of how to respond to all this. Scott, I think you can verify that I have been very lucky and successful in my career from a very young age. My very first book Illiberal Education was 15 weeks on the New York Times bestseller list And made my reputation. I’ve had multiple New York Times best sellers, long before the talk radio circuit, long before I made a single movie.

I started speaking in 1991, I believe, right after Illiberal Education came out. And speaking was very lucrative. I could make thousands of dollars a day by giving the same speech again and again on different campuses, and I did that for years. So the truth of it is between my perch at a think tank between my book between my speeches, I literally could have stopped working in my 30s. I wasn’t looking for a business model. I don’t need a business model. I never have, and those aspects of my career which started at a very young age have continued to this day. It’s not as if they dried up, and I needed to become another Rush Limbaugh. Not at all. I’m still writing books and my books are more successful than ever. I’m still speaking on the campus and elsewhere.

So it was almost by accident that I made the first movie, the Obama movie, and I did it without even thinking of it as a commercial enterprise. I literally thought it would be amusing to try to test my hand at making a documentary. I went to people to ask them for money, and they kind of laughed at me. They go, “Well, you’ve never done this before.” And I had to say to them “Think of it as a donation, and then if I can give you your money back, let’s do it again.” In other words, the phrase I literally coined was “recycled philanthropy.” And I went into moviemaking on that basis.

Now again, my first film on Obama was very successful. I’ve been able to get people in the theater to watch films. And by the way, I’ll stand in the back of the theater, it’s dark, and I’ll see some Hispanic guy with his wife and five kids. And they stand up and applaud at the end of the movie. I see them walk out of the theater, and there’s like a tear running down the guy’s face, and I say to myself. “Wow.” I mean that’s never a guy I would see standing in line at Barnes and Noble to get a signed copy of my book. So that’s what motivates me is the ability to reach people, who like me, have often started life at the bottom, who view the American dream as a ladder who see themselves as struggling up the ladder.

My politics is ultimately based on that primordial immigrant experience of coming to America in search of a better life. So I think that’s why my point of view resonates. I don’t tell anyone lies. In fact, I think what makes my work controversial is that it makes claims that are true that the other side has trouble refuting. No one has made so many extreme statements about the Left that all happened to be true.

Now, in some cases, when I make a mistake—and I have—I will admit it right away. So to give you an example, I made the statement a few years ago that no Republican owned a slave—that of the four million slaves that existed in the United States in 1860 on the eve of the Civil War virtually all of them were owned by Democrats. Now Kevin Crews, a historian at Princeton assembled a team of a 150 historians to attack this single claim because he knew how devastating it is. It means that America didn’t do slavery; the Democrats did. Slavery wasn’t something distributed across the society. Slavery was concentrated in the Democratic Party, and the Democratic Party was the party of the plantation.

So he knew how crushing this was, so the historians dug deep and they basically found about a dozen Republicans who owned slaves. This is itself an anomaly. Why would a Republican own a slave? First of all Republicanism was strong in all the free states where slavery wasn’t even allowed, but there were a handful of border states. Now it turns out that there were some Democrats in those border states, slave owners, who were for slavery, but they were not for secession. They were scared of secession. They knew that secession would mean war, and they thought that that might mean the end of slavery, so they became Republicans at the last minute in order to avert secession and war. Essentially, they thought that the Republican compromise which is to stop the spread of slavery would protect their slaves in the South and in the border states.

So there were a handful. I think the number is somewhere between 10 and 20 Republicans out of 4 million who owned slaves, so see how my general point is undisturbed. But the moment I saw that there were some Republicans who owned slaves in Delaware and in Missouri, I was like, you know I made a mistake, I should not have made a generalization because I didn’t know of a single case of a Republican who owned a slave because it’s difficult to be able to sort of disprove a negative. But you, by just by showing me these handful of examples, I have to correct myself. So I did it publicly and immediately, and I said, “But let’s remember that my general point that the Democratic Party is the party of slavery, that the vast, vast majority of slaves were owned by Democrats, all of that remains true.”

And so in the rare cases—and they’ve been extremely rare—where I’ve actually made a mistake, I have been quite willing to publicly acknowledge it.

In the next installment of “Dinesh D’Souza Meets His Critics,” learn from his experience working in the Reagan White House.