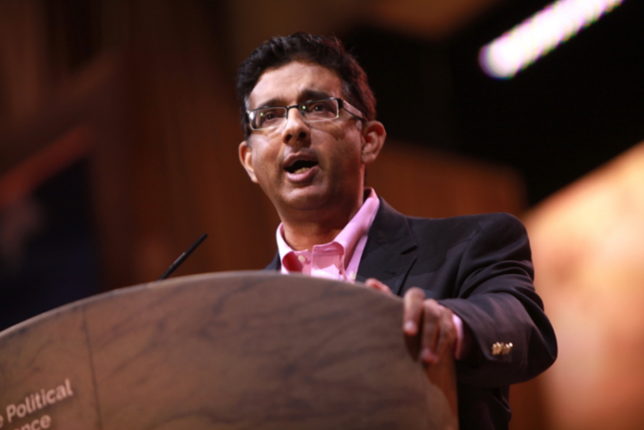 WALTER: Well, you’ve done a wonderful job on a lot of the substance of the criticisms launched against you. You also, of course, get criticized for your methods. So let me turn to a question or two on that. The Guardian, again talking about Death of a Nation, says, “D’Souza is not really trying to convince anyone who doesn’t already agree with him.” True?

D’SOUZA: Not true. But there is a grain of truth in what they’re saying. Let me explain. I think it would be fair to say that in my early career at Policy Review then on at AEI and my early career Hoover, I saw myself as part of a community of intellectuals that spoke within the intellectual camp. So if someone were to ask me who am I actually talking to, I would say well I see myself as part of a conservative movement, and we’re developing ideas collectively through criticism and exchange that articulate the conservative idea.

At that time, you know, there was a guy Jim Sleeper who wrote I think for the New York Daily News. I had very good relations with Hitchens. I knew E.J. Dionne from the Washington Post.

So I would say in some senses of someone would ask me, “Who are you addressing your ideas and your articles to?” I would say, well, I’m in the small magazine world, writing for those guys. Now two experiences sort of change my thinking about that. The first is when I had my campaign finance case, I called upon some of these guys, my friends I thought, to defend me and to a man they would say to me privately, “Oh Dinesh you’re getting shafted. This is terrible. What you did was a very minor infraction.”

And I said, “Well, you know, it would be really helpful if you were to say that because you’ve got a powerful perch at the Washington Post and the New York Times.” But none of them, and I emphasize the word “none,” would come to my defense. I then realized that these were not gentlemen of the sort I had thought. They are unreliable, even when it comes to an issue of something that they themselves believed in. I wasn’t that I was trying to convince them. They agreed that this was bad, but they absolutely refused to say so. That was number one.

The second thing I notice is that many of these guys are our professional head scratchers. And by that I mean I would see them in 1986, and then I would turn on C-SPAN and there they were in 1996 and they were saying the same thing, and they were still scratching their heads. I realized that if I talk to them for another 10 years, they’ll be scratching their heads in 2006 and again in 2016.

I thought to myself, is this really a project worthy of my life’s work—to try to convince these professional head scratchers who essentially have not evolved one iota over decades who write the same articles 30 years later that I saw them write you know when I was beginning my career. I thought to myself this is a little bit of a futile enterprise, and then I notice at the same time that there was a large body of people across the country. Many of them not schooled in the Ivy League. Some of them who had just gone to high school. Others had gone to two years of college or maybe four years of college, but then spent most of their time raising their kids or working in a bank.

These are people who had a genuine interest in the American founding. They wanted to know what made America exceptional. They wanted to know who are the people who attack America. In other words, these are people who wanted to learn, and there was no mechanism for them to actually learn, and yet they were hungry for knowledge. And I thought to myself, “Wow. This is actually a much better constituency for me.” Why? Because I think part of my strength is to be able to take ideas including complex ideas and present them in an understandable way and later through films in a pictorial way.

So this is a kind of public educational mission. When I when I first came to Washington, I wanted to be a public intellectual, but I think I didn’t really know what that meant. To me what it means now is someone who actually educates the public and doesn’t join a kind of charm circle of people—a kind of mutual admiration society—in which you spend all your time courting the respect of people who ultimately aren’t going to be convinced by you and aren’t going to help you when the chips are down.

I think one of the reasons that we have this sort of trahison des clercs (the treason of the intellectuals), even on the conservative side, is many conservative intellectuals are beholden to the progressive Left. They depend for their credibility and bona fides on what progressive say about them. So how can you expect them to contest progressive orthodoxy at its core when ultimately they are in a sense a minority of courtier intellectuals wooing the very progressive class whose ideas they need to be debunking.

So this is the sense in which I’m actually glad to be out of that game, at least to a degree. I’m still doing what I did before. I speak in a more colloquial language because I’m trying to reach a different sort of person. But I think that in some ways I’m mentally more liberated, and I’m able to challenge orthodoxies in a more bold way because ultimately I’m not swimming within parameters that have been set by for me by other people.

In the next installment of “Dinesh D’Souza Meets His Critics,” demolish some key leftist narratives.