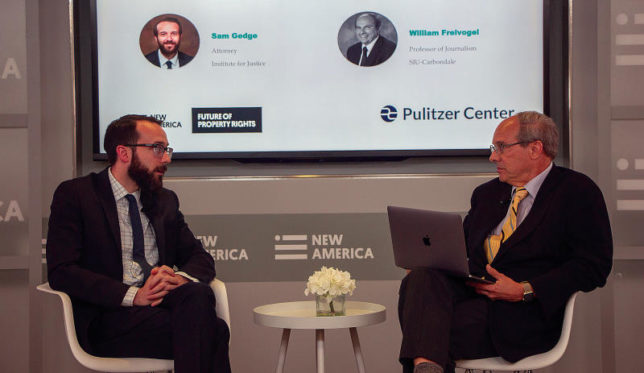 Of course, nothing would be dynamic about civil forfeiture reform without a distinct set of interests pushing back against those reforms. Chiefly and quite logically, these interests represent law enforcement and government.

Supporters argue that the system, whatever its flaws or potential for abuse, provides society with several benefits that on balance justify its retention. They point to the fact that forfeiture can remove from criminal hands assets used in furtherance of criminal activity or proceeds derived from criminal activity. This, they argue, is a powerful deterrent. Civil forfeiture can also allow the seizure of criminally linked property when the criminal or owner is beyond the reach of police, perhaps because he or she has fled the country. And because many jurisdictions use seized assets to fund law enforcement or some other public purpose, civil forfeiture helps defray costs that taxpayers would otherwise need to bear. Finally, in some cases, relevant law allows forfeiture proceeds to compensate victims of crime. One notable example involves assets seized in connection to the Ponzi scheme operated by Bernie Madoff.

Given their inextricable connection to the issue, it is not surprising that all levels of law enforcement prominently make these arguments. Federal agencies such as the U.S. Drug Enforcement Agency and the FBI defend forfeiture as a powerful weapon against wrongdoers and cite examples of how civil forfeiture has disrupted serious criminal enterprises.

National law enforcement associations have been active on the issue at the federal level. According to the Senate’s lobbying disclosure database, groups such as the National Association of Police Organizations, the Fraternal Order of Police, the National Association of Assistant United States Attorneys, and the National Sheriffs’ Association have lobbied Congress on asset forfeiture over the past few years, sometimes identifying it as a particular legislative priority. The National District Attorneys Association, which represents America’s prosecutors, maintains that civil forfeiture, including the equitable sharing program, “should remain intact at its core” and that probable cause—a quite low bar for law enforcement to meet—should be the standard required for employing civil forfeiture.

State-level reform proposals often prompt similar resistance. In Alabama, some sheriffs and district attorneys spoke out against “well-meaning” proposals to require a criminal conviction prior to forfeiture and to route proceeds into the state treasury rather than directly to police departments. Law enforcement reacted to proposed reforms in Utah by feeling “slapped down really for doing a very important part of the criminal justice process.” The Honolulu Police Department supported Hawaii Governor David Ige’s veto of a reform bill. Similar law enforcement opposition surfaced against reform efforts in Virginia and Pennsylvania, to name just two. These groups can exert powerful lobbying forces on state legislatures, as illustrated by recent events in Missouri.

Missouri is among the minority of states requiring a criminal conviction prior to any civil forfeiture, as well as mandating that any property seized in this way be used to fund public schools rather than police department expenses. Despite these restrictions, one county reportedly seized $2.6 million in 2018 alone from 39 passing motorists, none of whom were ever charged with crimes. Because these drivers had in some way implicated federal law—typically by transporting money across state lines—these local police were able to send the seized assets to the federal government through the equitable sharing program and receive up to 80 percent directly back to their departments. This effectively sidestepped both Missouri’s criminal conviction requirement and the mandatory transfer to the state’s schools.

A 2019 effort by a Republican state lawmaker to amend Missouri’s laws to eliminate this federal workaround initially looked promising: The bill passed unanimously in committee. What reportedly followed, however, was an intensive “behind-the-scenes lobbying” campaign by police and prosecutors to characterize such reforms as “anti-police and soft on the war on drugs.” That lobbying, which took place in private rather than at public hearings, was clearly effective: The chair of a separate committee—a fellow Republican—killed the bill before it was ever brought to the floor.

Another related set of interest groups—local government organizations—has recently and prominently shown support for civil forfeiture as amici in the 2019 Supreme Court case of Timbs v. Indiana. Amici are organizations or individuals who are not parties to a case but nevertheless have an interest in its outcome. They are permitted to file amicus curiae (“friend of the court”) briefs with the Supreme Court to present arguments not covered by the actual parties. These briefs can be persuasive in how the justices ultimately rule.

The fact pattern that gave rise to Timbs is a classic example of civil forfeiture in practice. Tyson Timbs pled guilty to certain drug offenses in Indiana, for which the maximum possible fine under applicable law was $10,000. The state, however, brought a civil forfeiture action against a Land Rover he had recently purchased for $42,000. After the Supreme Court held that the excessive fines clause of the Eighth Amendment applied to state civil forfeiture actions, a series of judicial remands ultimately led to a trial court order to return the Land Rover to him. The judge found that the vehicle’s forfeiture was “grossly disproportional to the gravity [of Timbs’ offenses],” but that decision is currently being appealed to the Indiana Supreme Court.

One revealing and overlooked piece of information from the Timbs case was the slate of amici lined up on both sides of the litigation: It was dramatically one-sided. Of the 20 amicus briefs filed with the U.S. Supreme Court by over 100 different organizations and individuals across the ideological spectrum, only one brief signed by five local government associations representing their eponymous constituents was submitted in support of the state of Indiana. That brief came from the National Association of Counties, the National League of Cities, the U.S. Conference of Mayors, the International City/County Management Association, and the International Municipal Lawyers Association. As part of their argument, these groups asserted that “forfeiture of this character advances legitimate governmental interests” and that “nothing about the forfeiture at issue is constitutionally excessive.” Indeed, they argued that forfeiture of a vehicle worth more than four times the maximum allowable fine was “appropriately proportioned” to Timbs’ offenses.

In the next installment of “Civil Forfeiture Reform,” discover that opposition to and support for reform does not follow party lines.