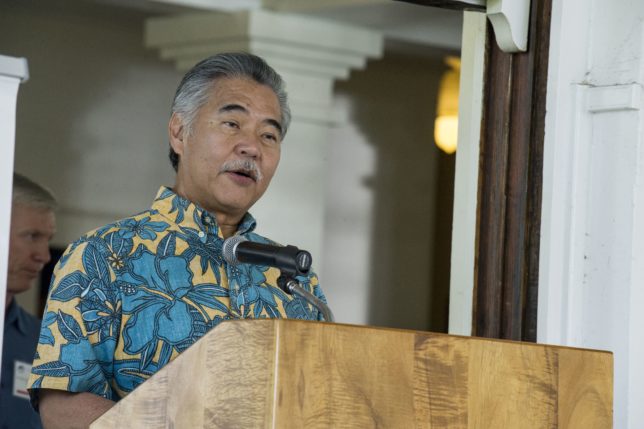 On July 9, 2019, Hawaii Governor David Ige (D) vetoed House Bill 748, which would have protected his citizens from a type of police abuse that rarely makes headlines: civil forfeiture. Had it passed, House Bill 748 would have ended civil forfeiture without a felony conviction being given first. That would have added Hawaii and its residents to the 33 states and the District of Columbia who have modified their laws to better protect citizens from abuse by law enforcement.

Hawaii sets itself apart from most states by having pathetically low requirements to seize citizens’ property. Hawaii relies on the preponderance of the evidence standard, the standard of proof for civil lawsuits. This means that the facts of the case presented are “more likely than not” or 51 percent likely to be true. By contrast, criminal cases are decided with a higher standard—beyond a reasonable doubt. In effect, Hawaii’s authorities can take a “guilty until proven innocent” instead of an “innocent until proven guilty” approach.

Whenever property is seized by law enforcement, regardless of standard of proof, that property is sold at auction. Each state has its own laws about what is done with the proceeds. In Hawaii, law enforcement retains 100 percent of the proceeds—with 25 percent going to the police, 25 percent going to the prosecutors, and 50 percent to the attorney general’s office.

This presents an extremely attractive incentive for law enforcement in Hawaii to violate the rights of citizens. In fact, the Honolulu Police Department (HPD) opposed the bill with HPD spokeswoman Michelle Yu stating that “HPD supports the veto of this bill.” Its passing would have resulted in those groups losing all the proceeds from civil forfeiture. As of 2015, their Federal Asset Forfeiture Account—which is shared between the participating law enforcement agencies—was at around $15 million.

Governor Ige’s veto is oddly out of step for a Democratic governor in a liberal state. Republican-controlled states have managed to pass strong asset forfeiture reform to help protect citizens’ right to property and due process. According to the Hawaii Tribune Herald, Governor Ige vetoed the measure because it “would be too restrictive.” He also claims that “there are safeguards to curb abuses of asset forfeiture by law enforcement.”

However, there’s another political issue at play: proceeds from civil forfeiture subsidize Hawaii’s law enforcement, reducing the amount of tax revenue needed to pay for police and prosecutors. If Hawaii were to ban civil forfeiture, it would need to alter its spending to make up the lost revenue. This pits civil liberties against the budgetary concerns of local government. This isn’t the first, or even most prominent instance of this tension shaping public policy.

The National Association of Counties (NACo), a nonprofit that advocates on behalf of county governments, supported the civil forfeiture actions of Indiana in the case of Timbs v. Indiana, which eventually came before the Supreme Court. In their amicus brief to the Supreme Court, NACo stated that Civil Forfeiture “serves another significant, albeit secondary, purpose. Forfeiture advances our Legislature’s intent to minimize taxation by permitting law enforcement agencies, via the sale of property seized, to defray some of the expense incurred in the battle against drug dealing.” This clearly outlines the goal of state and county governments on the issue: supplement the cost of law enforcement by seizing and selling civilian property, rather than competently managing state and local budgets.

Regardless of political leanings or the opinion of the governor, this veto is a complete disregard of civil rights and liberties. Our criminal justice system is designed to give citizens a degree of protection against the government. The silver lining, though, is that the supporters of asset forfeiture suffered a huge setback. Despite NACo’s support for Indiana, the Supreme Court ruled in favor of protecting citizens’ rights by finally incorporating the 8th Amendment’s Excessive Fines Clause.

Now, even if Hawaii continues to compromise its commitment to Aloha—treating everyone with dignity—citizens can find judicial relief.