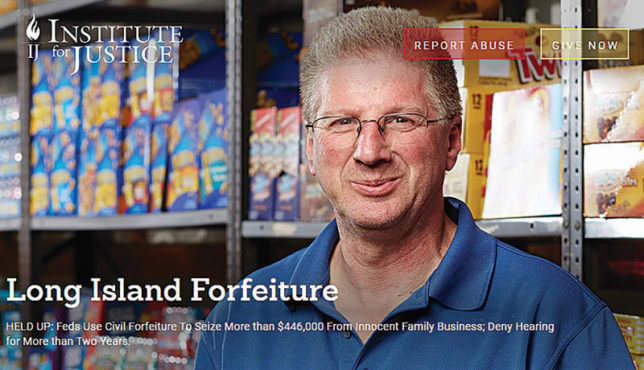 Sadly, real-life examples of innocent people ensnared by civil forfeiture are easy to find; they form the basis of many lawsuits brought by groups such as the Institute for Justice.

In one case, police seized a New Jersey mother’s car after her son used it to sell marijuana without her knowledge or consent. A college student had $11,000—his entire life savings—seized at an airport and held for over two years without ever being charged with a crime. Another man was pressured to sign away almost $92,000 in cash to the state of Wyoming during a traffic stop and then required to prove in court that he had earned the money lawfully. In 2012, the IRS seized $446,000 from two brothers who operate a convenience store distribution business, sat on the money for more than two and a half years without charging either with a crime, and returned the money only after the brothers filed suit demanding it.

Recent lawsuits have challenged dubious civil forfeiture schemes that extended to entire law enforcement departments. A suit seeking to force U.S. Customs and Border Protection to reform how it conducts forfeiture stemmed from an American man whose truck was seized and held for over two years because he had left five rounds of legally possessed ammunition in his center console. He was never charged with a crime, but it took a lawsuit to get his truck returned.

Another class action lawsuit is challenging the civil forfeiture regime in Detroit, under which law enforcement allegedly routinely seizes vehicles from owners on extremely thin pretexts, never charges them with crimes, and then requires payment of over $1,000 in fees for the owners to recover their property.

A particularly egregious example comes out of Philadelphia, where police and prosecutors operated a “draconian civil forfeiture machine” that took in over $72 million from 2002 to 2014. In addition to cash, the city pursued forfeiture against over 3,500 automobiles and over 1,200 homes and other real property during that period. Often, the property owners were never charged with crimes, yet to challenge the forfeitures they were required to appear at an average of five separate hearings overseen by a prosecutor, not a judge, whose decisions were not appealable. Over 35 percent of forfeiture proceeds were spent on salaries, including “the very officials doing the seizing and forfeiting.” Following a major class action settlement in 2018, the city of Philadelphia agreed to “dismantle” its civil forfeiture apparatus though a series of reforms and set up a multi-million dollar fund “to compensate forfeiture victims.”

Recent Developments in the Law

Cases such as these touch an ideological nerve for many on both the right and the left, and they have prompted a flurry of activity in state legislatures and the courts. New laws have come with often bipartisan support. State-level changes to civil forfeiture tracked by the Institute for Justice reveal that 35 states and the District of Columbia have passed some type of asset forfeiture reform since 2014. At present, at least 15 states require a criminal conviction to forfeit most types of property in civil court, while at least 13 place the burden of proof for innocent owner claims on the government. Three states—New Mexico, North Carolina, and Nebraska—have done away with civil forfeiture entirely.

At the federal level, the response has been more muted. Former U.S. Attorney General Jeff Sessions was a vocal proponent of civil forfeiture, reversing some Obama-era limits on the equitable sharing program in 2017, but also updating it with modest safeguards designed to help protect innocent property owners. That program’s revival met with bipartisan skepticism in Congress, but apparently received the support of President Donald Trump.

There has been some federal activity on the legislative front, as recently catalogued by the Heritage Foundation. In 2019 Congress passed the Clyde-Hirsch-Sowers RESPECT Act, which limited how the IRS can use civil forfeiture to seize assets from bank accounts. Two other pieces of legislation have also been introduced: The Fifth Amendment Integrity (FAIR) Act (H.R. 1895) and the Deterring Undue Enforcement by Protecting Rights of Citizens from Equitable Sharing and Seizures (DUE PROCESSS) Act (H.R. 2835). Both would “substantially overhaul” federal civil forfeiture through reforms such as raising the standard of proof to “clear and convincing” evidence, shifting the burden of proof from the property owner to the government, and, in the case of the FAIR Act, abolishing the equitable sharing program. These bills have attracted some bipartisan support.

Finally, the Supreme Court also weighed in on state civil forfeiture laws in 2019. In Timbs v. Indiana, the Court unanimously ruled that the Eighth Amendment’s prohibition of excessive fines applied to state governments, specifically in the context of civil asset forfeiture. While Timbs will go down in legal history as the case that “incorporated” that clause against the states, its practical implications for civil forfeiture are also significant. Without a doubt, it is one of the more dynamic fronts in the multipronged world of criminal justice reform.

In the next installment of “Civil Forfeiture Reform,” identify the interests that resist reform.