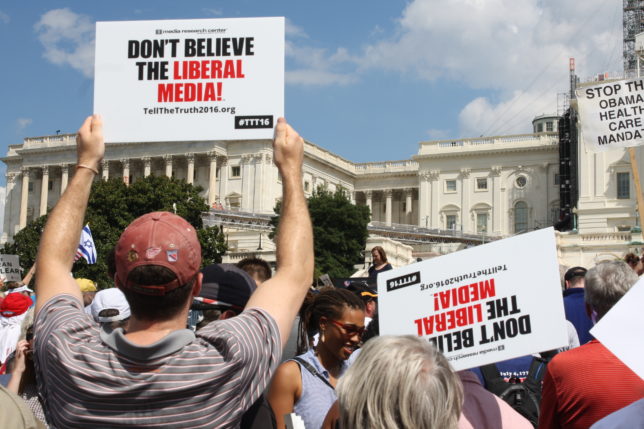 The Rise of the New Nonprofit Media

Media projects organized under the nonprofit tax code are not particularly new. Venerable organizations including the conservative magazine Commentary (founded 1945), the labor-left publications In These Times and Mother Jones (both founded 1976), and the metropolitan-progressive networks of public broadcasters are all organized as 501(c) nonprofit organizations and have been for some time. What is new is the scale and prominence of the nonprofit media, which has filled in gaps created by the decline of the traditional press.

Charles Lewis, a onetime producer for “60 Minutes,” founded the Center for Public Integrity (CPI) in 1989 to replace depleted investigative journalism resources. CPI has historically leaned left (and takes funding from a number of prominent left-of-center interest groups and foundations), though it did claim credit for reporting the Clinton White House’s practice of rewarding major donors with nights in the Lincoln Bedroom. Lewis identified benefits for CPI in adopting a nonprofit model: Independence from corporate advertisers, freedom to spend heavily on long-term investigative stories, and freedom from the broadcaster regulation Lewis experienced at CBS.

CPI scored a large scoop in 2015, when anonymous sources leaked documents concerning the off-shore financial arrangements of prominent people in tranches known as the Panama Papers. The documents were leaked to the German newspaper Suddeutsche Zeitung, which shared them with the International Consortium of Investigative Journalists (ICIJ), then a project of CPI. CPI spun the ICIJ into an independent nonprofit organization in 2017; later that year, ICIJ reported on a second tranche of leaked documents detailing off-shore financial arrangements known as the Paradise Papers.

Since its founding, CPI has grown substantially. As of 2017, CPI’s revenues reached almost $10 million. Notable CPI financial supporters include the Grantham Foundation for the Protection of the Environment, the Laura and John Arnold Foundation, the MacArthur Foundation, California Endowment, and the W.K. Kellogg Foundation.

Joining CPI as a major left-of-center investigative journalism nonprofit in 2008 was ProPublica, seeded with $30 million in grants by the Sandler Foundation, the philanthropic vehicle of controversial subprime mortgage pioneer Herb Sandler and his wife Marion. Paul Steiger, formerly managing editor of the Wall Street Journal, served as editor-in-chief of ProPublica from its founding until 2012.

ProPublica enjoyed a major boost in fundraising after the election of President Donald Trump; according to Harvard’s Shorenstein Center, the group reported a leap in annual revenue from $14 million to $43 million from 2016 to 2017. Left-leaning foundations like the Knight Foundation and MacArthur Foundation lavish money on CPI and ProPublica; a study published by Harvard’s Shorenstein Center found that they each received over $23 million in foundation funding from 2010-2015, the two highest totals for what the researchers classified as “national news nonprofits.”

State of the Nonprofit Media

The non-profit media occupy a major chunk of the press landscape. Foundation-funded journalism, promotion of the journalistic profession, and journalist education alone is a $300 million annual enterprise, not including contributions by individuals, corporations, and other advocacy groups. The nonprofit media hold an important influence over not only national investigative reporting but also culture, local news, and single-issue special interest coverage, in addition to traditional ideological and philosophical publications.

Harvard University’s Shorenstein Center on Media, Politics, and Public Policy published “Funding the News,” the most comprehensive survey of the recent nonprofit media landscape, in June of last year. Authors Matthew Nisbet, John Wihbey, Silje Kristiansen, and Aleszu Bajak identified $1.8 billion in funding over the six-year period from 2010-2015 (inclusive) directed to nonprofit media, journalist education programs and professional development, and the Newseum, the museum of journalism now scheduled to close at the end of 2019.

Laying aside the doomed Newseum—alone responsible for $178 million in expenditures over the survey period—the nonprofits identified by the researchers can be classified into a handful of sectors.

According to the authors, the “great majority” of nonprofit media outlets “rely heavily on foundation grants for their revenue.” And in their analyses, left-leaning foundation funders stand out. The MacArthur Foundation, Ford Foundation, and Gates Foundation are among the top five foundation funders of traditional public media; the Roderick MacArthur Foundation, Carnegie Corporation of New York, and Hewlett Foundation make the top five for funding magazines (with Ford sixth); and the top seven funders of national news nonprofits also all lean left: Ford, MacArthur, Omidyar Network Fund, Knight, Kendeda Fund, Open Society, and California Endowment.

The current wave of left-liberal journalism grantmaking, which the Shorenstein authors dub the “Trump bump” after the foundations’ nemesis in 1600 Pennsylvania Avenue, follows on a long tradition of left-of-center foundations funding journalism projects. In the 1990s, what are now the Pew Charitable Trusts launched a “civic journalism” campaign. It seeded “coordinators” to work at mainstream newspapers, among them the Boston Globe; even some liberal observers questioned the ethics of the arrangement.

Based on the Shorenstein researchers’ somewhat questionable classifications (which ruled the metropolitan progressive high-culture magazines Harper’s ­and Lapham’s Quarterly, the anti-business product reviews publication Consumer Reports, and the Atlantic as not ideological), liberal magazines out-raise conservative magazines from foundations by four to one. (The New Criterion, the conservative high-culture journal, was classified as conservative.)

This is consistent with the advantage progressives enjoy in the charitable nonprofit sphere in general and the foundation world in particular. Previous CRC research estimated the liberal advantage in charitable nonprofit expenditure at approximately three to one; the Manhattan Institute’s Howard Husock independently compiled data which CRC used to compare the size of top foundations on left and right to discern a comparable progressive advantage.

The spending on ideological magazine journalism provides three advantages to liberal-progressive-socialist causes and campaigns that far exceed the specific circulations of these magazines. (According to the Alliance for Audited Media, The Atlantic has a circulation of just shy of 500,000; for comparison, American Rifleman, the National Rifle Association’s largest publication which focuses on technical firearms information and outdoors life, has a circulation of almost two million.) The ideological magazines supported by the left provide a source of stories for the left-of-center metropolitan mainstream press to cover, signal-boost left-of-center policy views and issues important to or politically favorable to the left, and encourage the development of radical far-left thought.

Mother Jones’ release of the “47 percent” tape of then-Presidential candidate Mitt Romney is perhaps the most consequential case of a left-wing ideological magazine generating a story for the mainstream press. James Carter IV, the grandson of former Democratic President Jimmy Carter, reportedly connected a Mother Jones writer with a person who made a surreptitious recording of Romney’s impolitic remarks at a 2012 fundraiser. The tape proved damaging to Romney’s campaign; President Barack Obama used the audio in an attack ad that ran in crucial swing states.

Beyond generating damaging quotes or information about Republicans, liberal ideological publications (of all stripes, but especially print and online magazines) promote conversation about liberal agenda items and issues favorable to the Left. Conveniently, researchers from Harvard, Florida State University, and MIT actually quantified how effective the ideological progressive media spotlight can be when turned on specific issues: In a series of trials, they determined that an issue spotlight by members of the Media Consortium (a now-disbanded alliance of left-wing ideological publications) could increase Twitter traffic on an issue by 63 percent in a single week.

And that issue spotlight can come from ideological positions far outside the mainstream. Publications like In These Times and Jacobin, both openly old-fashioned state-control-of-the-means-of-production socialist in outlook, have helped drive the rising interest in socialism alongside political figures like Sen. Bernie Sanders (I/D-VT) and Rep. Alexandria Ocasio-Cortez (D-NY).

Unsurprisingly given the substantial funding of nonprofit national investigative and local-and-state-level journalism by left-leaning foundations, outlets like Center for Public Integrity, ProPublica, and Center for Investigative Reporting lean left-of-center. Together with the government transparency group Sunlight Foundation, which has since re-launched as a clearinghouse for information exposing alleged corruption in the Trump administration, these organizations were the top four national news nonprofit recipients of foundation grants identified by the authors of “Funding the News.” They are all left-leaning. Only one of the top ten recipients identified, the Franklin Center for Government and Public Integrity, was right-leaning.

While the broad-spectrum news nonprofits the authors identified leaned left, the “deep verticals” surged left. Grist magazine, a radical environmentalist web-journal; RH Reality Check (now Rewire.news), a pro-abortion advocacy website; the Marshall Project, an outlet that advocates liberalizing the criminal justice system; and Next City, an environmentalist-urbanist website, all received seven-to-eight-figure totals of contributions from foundations over the 2010-2015 period studied. These issue-specific outlets can drive coverage and shape narratives for the broader press. Left-wing funders see these efforts as highly valuable: The Susan Thompson Buffett Foundation, one of the largest non-governmental funders of abortion rights, contraceptive distribution, and population control worldwide, spent just shy of $3 million supporting Rewire.news in 2016. Rewire’s total contribution revenue from other sources was less than one-fourth of STBF’s contribution.

Democratic politicians took note of liberal nonprofit journalism in 2009, at the height of Obama-wave-fueled Democratic power. With mainstream newspapers losing revenue as ad sales fell after the financial crisis and Americans cancelled subscriptions amid a cash crunch, Maryland Sens. Barbara Mikulski and Ben Cardin introduced the “Newspaper Revitalization Act,” a plan to allow conventional newspapers to reorganize as 501(c)(3) charitable nonprofits. While it did not pass, it shows the extent to which nonprofit efforts are central to progressive journalism.

In the next installment of Don’t Trust the Messenger, take stock of alternatives offered by right-of-center publishers.