Unions and Their Allies Threaten the Supply Chain 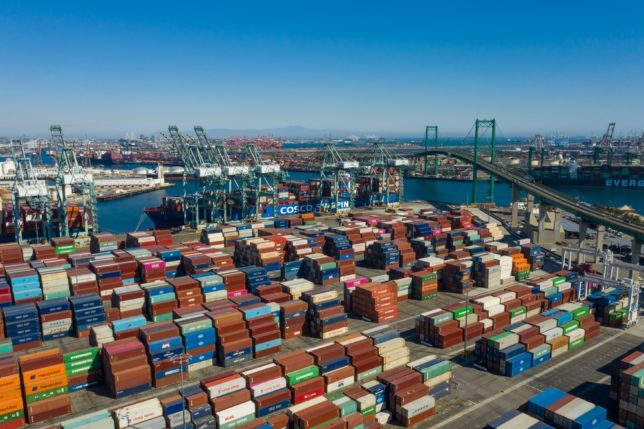 Tell me if this sounds familiar: Amid major external disruption and inflation spikes, important foodstuffs go scarce, and other items are difficult to find. But today’s situation is not unique. In 1945 and 1946, the United States suffered a severe economic disruption as inflation surged as the military demobilized at the end of World War II and war-related price and wage controls were relaxed. Meat shortages were widespread amid off-again-on-again price regulation.

Making matters worse for the public were organized labor, who conducted the largest wave of industrial action—strikes and other work disruptions—in American history. But while mass labor strife has not yet manifested in the present day, Big Labor and its allies in government are working toward reprising the economic conditions of the postwar period.

The International Longshore and Warehouse Union

Anyone with a passing familiarity with current economic conditions is aware of supply chain problems, which are contributing to inflation and product shortages. These supply chain problems are largely not Big Labor’s fault. Lockdown policies in the United States and abroad (especially in China) and the Russian invasion of Ukraine, which took a major fertilizer producer and grain exporter out of the world markets, are driving worldwide inflation of food prices. (Big Green does share some of the blame because gas prices were rising well before the Russian invasion or China’s lockdowns of major port cities like Shanghai, in part due to anti-energy-production policies it has urged the Biden administration to adopt.)

But like its predecessors during the postwar economic strife, today’s labor movement is perfectly happy to try to capitalize on chaos by threatening to make the chaos worse. The contract between the International Longshore and Warehouse Union (ILWU), which represents dockworkers at West Coast ports, and the Pacific Maritime Association, a membership organization of companies that serve those ports, expires on July 1.

The ILWU has a reputation for militancy and radical leftism. During the Cold War, the ILWU’s leader was Harry Bridges, described in his Los Angeles Times obituary as “an ardent Marxist and staunch supporter of the Soviet Union.” The Congress of Industrial Organizations (one of the predecessor federations that merged into the modern AFL-CIO) kicked the ILWU out of the federation for alleged Communist domination. In recent contract cycles, it has fought bitterly against the port management, calling a strike in 2002, which was broken by the George W. Bush administration invoking its powers under the Taft-Hartley Act. In 2014, it engaged in work slowdowns that led to an agreement mediated in the union’s favor by the Obama administration’s Labor Secretary Tom Perez.

This cycle already shows signs of strife. The union reportedly broke off negotiations in late May, agreeing only to reconvene June 1. While the contract lapsing does not guarantee industrial action, the end of the contract does end the “no-strike” provision in the contract, opening the door to ILWU ordering a strike or other work slowdown. Given the volume of commerce already held up in the West Coast port queue, a work stoppage could be devastating to the wider economy. The union could be counting on that threat to get what it wants in mediation involving the Biden administration, which has made no secret of its affinity for organized labor.

The likely outcome is that needful productivity-enhancing reforms to West Coast port operations—the absence of which is contributing to supply chain problems already—will not come. The union wins; the public loses.

Readers of our “Core Issues in Labor Policy” serial will remember that since the Taft-Hartley Act, federal labor law has restricted the targets of union industrial actions. The law, passed in response to the strike wave of 1945–1946, forbade “secondary” strikes and boycotts targeting “neutral” businesses merely engaging in commerce with a target of labor activity. The proposed Protecting the Right to Organize (PRO) Act (H.R. 842) would repeal this proscription, handing Big Labor a powerful weapon—one of the institutional Left’s favorite weapons, in fact.

But the PRO Act has stalled in the Senate thanks to the supermajority filibuster rule, and a handful of key Democratic senators from business-friendly states have not co-sponsored the legislation. So, just as she has sought to revive card check by pushing it through National Labor Relations Board action, NLRB General Counsel Jennifer Abruzzo has sought to leverage the board’s operations in a way that would expand the permissibility of secondary activism in labor disputes.

Writing at the Federalist Society’s blog, Alex MacDonald reports on a Labor Board case in which SEIU-backed janitors picketed and leafletted seeking better pay and conditions from their employer and an alleged joint employer. Some leaflets mentioned KGO Radio, one of the building’s occupants. After the janitors’ primary employer fired two of them and the board initially heard the case, the NLRB ruled the picketing had targeted KGO in addition to the janitors’ employer and claimed joint employer. Given that targeting, the Board reasoned that the picketing “had an unlawful secondary motive”; therefore, the firing was permissible. The Ninth Circuit Court of Appeals overturned the ruling, holding that the janitors’ pickets did not have a secondary motive.

That sent the case back to Abruzzo, the Biden administration–appointed ex-union lawyer now serving as General Counsel of the National Labor Relations Board. MacDonald writes that Abruzzo took a radical approach to give the union even more than the Ninth Circuit would:

In a position statement, Abruzzo argued that the Board should no longer consider picketing automatically “coercive.” That approach, she wrote, suppresses expression protected by the First Amendment. Instead, the Board should ban secondary picketing only when it confronts a third party with “ruin or substantial loss.”

MacDonald further argues that throughout history, secondary picketing has been legitimately regulated and that “Abruzzo’s memo plays fast and loose with precedent.”

The Truth About Consequences

If organized labor gets its way through its own activism, creative lawyering by the NLRB, or the PRO Act, the result will be even more stress on the fragile economy and the supply chain. In 1947, this led to major setbacks for organized labor, as Congress—over then-President Truman’s veto—rebalanced the power dynamics between Big Labor, employers, workers, and consumers. Unions and their supporters should be careful in how aggressively they play their hand, lest history rhyme.