Progressive Labor Plans to Drag U.S. Economy Back to 1946 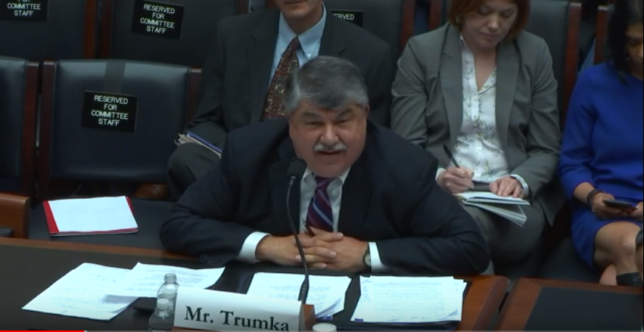 Democrats like to believe they are building a progressive future. Their approach to labor relations in the “Protecting the Right to Organize Act” shows instead a desire to return to a regressive past—a past the past itself rejected—to reward a declining political constituency.

Last Friday, 40 Senators and 100 Representatives—among them at least six presidential candidates—proposed the most radical expansion of union power since 1935. Their bill would repeal all existing right-to-work laws and forever prohibit exempting union nonmembers from paying union fees.

It doesn’t stop there. The radical bill would also legalize strikes to coerce employers to stop doing business with other businesses (known in labor jargon as the “secondary boycott”) and vastly strengthen unions’ ability to cripple the economy with strikes in other ways. In so doing, the bill does not look toward the future of the economy and employment relations, but rather looks back to the most disruptive period in post-war American labor, when 10 percent of the workforce—4.6 million workers then, equivalent to 16 million people today—went on strike.

The year was 1945; American and Allied troops had secured victory over the evil empires of Nazi Germany and Imperial Japan, and the boys were coming home. With the war over and a no-strike pledge expiring, labor unions—which had seen their numbers and dues revenues bolstered by government action through the National War Labor Board—targeted the fragile economy with a strike wave.

Under the provisions of the old Wagner Act, unions had ample rein to compel workers to join, to strike for whatever end they desired, and to coerce outside businesses to agree to union demands. Entire sectors of the economy shut down; the strikes proved so destructive that even New Dealers like then-President Harry Truman threatened to draft railroad strikers (technically covered by a separate but similar labor law, the Railway Labor Act) into the Army. General strikes—labor unions holding captive entire cities—were called in Oakland, California and Rochester, New York.

The demands the United Auto Workers led by the socialist Walter Reuther made of General Motors illustrate the extremism of labor when unions are given the powers Congressional Democrats propose to restore. The UAW not only demanded a 30 percent pay hike, it also insisted that GM not raise its prices and give the UAW control over business decisions. Naturally, GM refused; after a 113-day strike, GM and the union settled for a smaller pay raise and GM retained control over its business.

The effect of all this disruption was a bi-partisan belief that the Wagner Act had given unions far too much power. Congress enacted the Taft-Hartley Act, which curtailed unions’ ability to coerce workers and debilitate the economy with strike waves, by overriding President Truman’s veto. For his part, Truman reportedly told a government official that he knew his veto would be overridden and that the law would be “a pretty good law,” but a veto would win him political loyalty from unions.

The results of rebalancing power between organized labor, businesses, and individual employees through the Taft-Hartley Act are clear: Economic growth surged through the 1950s through the early 2000s (and has begun to revitalize in the late 2010s). American competitiveness relative to the sclerotic, union-controlled economic systems of Europe has seen American living standards remain in many ways the envy of the world.

Congressional Democrats’ Protecting the Right to Organize Act would functionally repeal Taft-Hartley, removing states’ authority to outlaw forced dues, reinstating secondary boycotts, and restricting the rights of employers to give employees both sides of the argument for unionization. The consequences of such a bill could be reminiscent of America’s postwar convulsions or Britain’s 1979 Winter of Discontent.