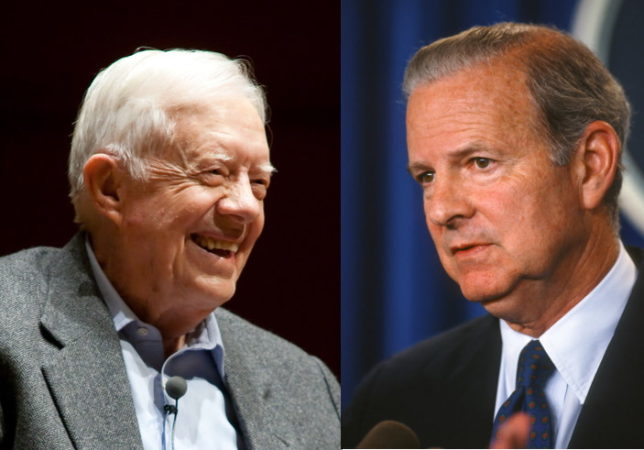 Believe it or not, the nation could learn a few things about how to run elections from Jimmy Carter.

In 2005, Carter co-authored a study on America’s election systems with James Baker III, who ran George H.W. Bush’s 1980 primary campaign against Carter and later served as Ronald Reagan’s treasury secretary and chief of staff. The resulting Baker-Carter Commission report still stands as a monument to how to run free, fair, transparent elections—which makes it all the sadder that today’s leftists bitterly oppose everything the report proposed.

For example, the Baker-Carter report warned about mail-in ballots, flatly contradicting the views held by today’s leftists that vote by mail is key to increasing voter participation. Baker-Carter says otherwise: “While vote-by-mail appears to increase turnout for local elections, there is no evidence that it significantly expands participation in federal elections.” (Recent studies suggest the same.)

Those activists also claim that vote-by-mail and private collection bins helped make 2020 the “most secure election in U.S. history.” Baker-Carter: “Vote-by-mail is . . . likely to increase the risks of fraud and of contested elections” in the states, especially where the “safeguards for ballot integrity are weaker.”

In short, mail-in ballots can work in some spots, but not everywhere—particularly areas with a high risk of ballot trafficking.

Instead, Baker-Carter proposed five pillars as the foundation of a “modern electoral system”:

Anyone familiar with today’s election battles knows that the Left has consistently opposed all these measures.

The Electoral System We Have

The states’ voter rolls are notoriously flawed, riddled with the names of people who’ve died or moved. Efforts to clean them up have been attacked by Democrats. For example, as one of the last acts of the Obama administration, Attorney General Eric Holder’s Justice Department tried to block Ohio from purging its voter rolls, claiming it would discourage minority turnout. (Trump officials reversed the federal government’s position in 2017, and the Supreme Court upheld Ohio’s practice a year later.)

Improving voter access is about the only recommendation on this list that today’s Left supports—but not if it means improving ballot integrity and security. Democrats went all in on mail-in ballots to defeat President Trump in 2020, effectively turning it into the country’s first all-mail election in many places. Yet mail-in and absentee ballots are extremely vulnerable to ballot harvesting, since there’s rarely any oversight from the time the ballots are sent out to when election officials collect them. In many cases, establishing a paper trail is impossible, particularly in places with privately funded drop boxes, which enable illegal ballot harvesters to prey on the poor and elderly, claiming to “assist” while really stealing their votes.

In the last election, we learned just how far left-wing activists will go to taint election offices when the Mark Zuckerberg–funded Center for Tech and Civic Life (CTCL) dumped $350 million into thousands of local elections offices in fall 2020. These COVID-19 “relief grants” effectively privatized the election in battleground states, including Pennsylvania, Wisconsin, and Georgia, where “Zuck bucks” overwhelmingly favored Democratic vote-rich counties.

For example, in Georgia we found that CTCL spent an average of $5.33 per capita in Biden counties and only $1.41 in Trump counties. Over 94 percent of the $42 million in Zuck bucks that flowed to Georgia went to counties Biden won.

I doubt that even CTCL believes that private money from a partisan mega-donor encourages “electoral institutions that are impartial, professional, and independent.”

The Baker-Carter report was paid for by a set of liberal foundations, many with familiar names: Carnegie Corporation of New York, Ford Foundation, Knight Foundation, and the Omidyar Network, which is bankrolled by eBay founder and liberal billionaire Pierre Omidyar.

Omidyar himself sits on the board of Nonprofit VOTE, which registers voters to advance “racial equity.” Speaking of Hawaii specifically, Omidyar et al. tellingly argued, “If we want to get out the vote, we’ve got to mail it in.”

We’ve traced grants from these foundations to a host of groups demanding Americans oppose the very policies proposed in the Baker-Carter report:

But this shouldn’t surprise anyone who paid attention in the last election cycle and the Left’s shenanigans.