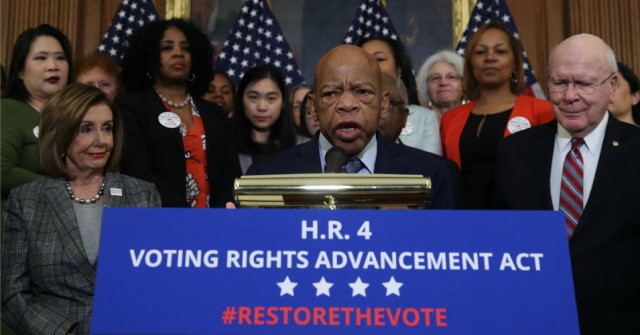 Naming the John Lewis Voting Rights Advancement Act (H.R. 4) after the Georgia congressman who died last year may evoke the 1960s Civil Rights movement, but it would federalize elections almost as effectively as the similarly misnamed For the People Act (H.R. 1), which is why so many professional activist groups are trying to push it through the Senate.

H.R. 4, which the House passed in August on partisan lines (219-212), promises to overturn the Supreme Court’s 2013 decision to end federal preclearance rules for certain, largely southern states established in the 1965 Voting Rights Act. The bill ostensibly looks to restore the federal preclearance rules. The Court’s ruling in Shelby County v. Holder pointed out that preclearance was intended to ensure state in the Jim Crow era didn’t discriminate against minorities’ voting rights by requiring certain states to preclear all redistricting plans with the U.S. Department of Justice. The requirement was meant to be temporary, and the Court held in 2013 that it was no longer applicable.

Far from reestablishing the tyranny of Jim Crow, abolishing the outdated rule allowed North Carolina and other states to implement election integrity laws and purge voter rolls of citizens who hadn’t voted in six consecutive elections and failed to confirm their residency.

Restricting state control over elections and the congressional redistricting process—which is enshrined in the Constitution—has been a decades-long project for the Left, culminating in the For the People Act. Little wonder that many of the top groups behind H.R. 1 are also backing H.R. 4.

The Groups Behind H.R. 4

Hundreds of left-wing groups have signed open letters urging the Congress to pass H.R. 4 representing Big Labor, Big Green, court-packing groups, get-out-the-vote groups, and litigation nonprofits, among others. The list is broken down into general blocs to chart which kinds of nonprofits are backing the legislation. See the Appendix for the full list.

Election “Reform” and Campaign Finance. Supporters include at least 30 groups focused on election “reform”—everything from replacing the Electoral College with a national popular vote and warping the 2021–2022 redistricting process to court packing and gutting First Amendment rights to “save” the republic from money in politics. Major supporters include People for the American Way, the Fair Elections Center, and Demand Justice.

Get Out the Vote and Voter Registration. These nonprofits (22 to date) take advantage of IRS rules allowing nonpartisan voter registration to target youth, minorities, and unmarried women and other Democratic-leaning constituencies ahead of elections. Notables include State Voices, Mi Familia Vota, the Voter Participation Center, and Progressive Turnout Project.

Labor Unions and Labor-Aligned Groups. Unions provide a massive pool of activists for marching and holding protests outside the Capitol Building. At least 10 such groups are backing H.R. 4, most notably the National Education Association, Service Employees International Union (SEIU), A. Philip Randolph Institute, and the AFL-CIO.

Faith-Based or Secular. On the left, it’s common to see left-wing progressive religious outfits rallying alongside groups with groups like Freedom from Religion Foundation. At least 33 such groups are supporting H.R. 4, including Sojourners, the Evangelical Lutheran Church in America, Faith in Public Life, American Atheists, and the National Council of Jewish Women.

Litigation Groups. Reliably left-wing groups that primarily exist to file lawsuits on a broad range of issues have offered their support—at least 19, including the Southern Poverty Law Center (SPLC), Lawyers Committee for Civil Rights Under Law, and the American Civil Liberties Union (ACLU).

Special Interests. Special interest is a broad category that captures a host of groups that push leftist policies related to income, race, age, etc. Most of the 60-odd groups are racial interest groups representing key Democratic-leaning constituencies: Color of Change, NAACP, UnidosUS, and the National Black Justice Coalition, to name a few.

General Advocacy. Few left-wing progressive groups are single-issue advocates. These groups are difficult to put in a single box, but they’re present whenever and wherever the larger Left needs them. Notables are Citizens for Responsibility and Ethics in Washington (CREW), Indivisible, and People’s Action.

Business. A coalition of companies have also lent their support to H.R. 4. It’s unclear who paid for it, but Business for Voting Rights is apparently run by Susan Klau, a consultant for the firm APCO Worldwide whose last job was with M&R Strategic Services. M&R caters to left-wing groups such as the Sierra Club and PETA and was founded by Donald Ross, an activist from Ralph Nader’s inner circle. Members include Amazon, Dropbox, Dell, Hershey, Facebook, Google, Intel, IKEA, Levi Strauss, Lyft, Microsoft, PayPal, Square, Salesforce, Starbucks, Target, Tesla, Zillow, and Zoom.

In June, For the People Act failed 50-50 on party lines in the Senate, well short of the 60 votes needed to overcome a Republican filibuster. As it stands, the John Lewis Voting Rights Act looks ready to fall on the same horns as its predecessor. But that could change if Democrats obtained enough votes to end the filibuster. Traditionally, such a rule change requires two-thirds of the chamber, but with some finagling a simple majority could rewrite Senate rules to allow legislation to pass with 51 votes (the so-called nuclear option).

Some on the left believe that Senate Democrats will use their thin majority (including the vice president) to effectively gut the filibuster. What’s clear is that the future of the country’s elections increasingly hangs on the swing votes—and pro-filibuster pledges—of Democratic Sens. Joe Manchin (D-WV) and Kyrsten Sinema (D-AZ).