The War on Plastic and Prosperity: Plastic Puritanism 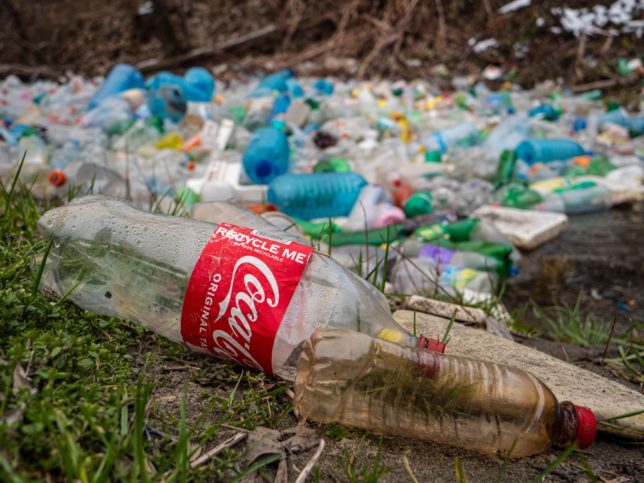 Several of the EMF’s 21 top-tier supporters share a very specific business practice: those PET plastic bottles that Coca-Cola refuses to give up.

Danone and Nestlé (along with Coke’s Dasani) have been ranked as three of the four largest water bottling companies in the world. In addition to the beverage titans in EMF’s support base, SC Johnson packages many of its cleaning products in PET, and Unilever uses it to make jars for goods such as Hellmann’s mayonnaise.

Many of the other corporations in EMF’s top-tier partners are also likely big uses of polyethylene terephthalate (PET) plastic—and for good reason: PET is one of the world’s many economically and environmentally beneficial plastic materials.

So is polystyrene (PS), which is used for everyday items such as the iconic red Solo cups we drink from at parties and a lot of our food packaging. Compared to other plastics, polystyrene is low-cost, highly malleable, heat resistant, and thus perfect packaging for the food service industry.

Pumped full of air, it becomes expanded polystyrene (EPS), sometimes known as “Styrofoam,” the legal trade name for an EPS insulation product made by DuPont. EPS is well known as the material used for everything from foam cups, bowls, and plates to custom-fitted shipping molds for fragile goods.

Because it is an exceptionally useful and low-cost option for serving and maintaining the ideal temperature of food and drink, PS/EPS packaging is frequently discarded with food waste on it. Food contaminate is obviously difficult to clean up efficiently, regardless of the packaging material, but is a “no-no” for recycling.

Even accepting for the sake of argument the Ellen MacArthur Foundation’s alarmist and dubious premise that there is a “plastic pollution crisis,” its research shows polystyrene accounts for only 3 percent “of today’s plastic packaging market.” As a tiny slice of the alleged problem, the no-brainer solution for discarded PS/EPS should be enhanced efforts to make sure it all ends up in the care of a sanitary waste disposal system. Without question that is the proven and most efficient way to keep the comparatively small amounts of polystyrene from reaching the ocean.

But even in the worst-case scenario, 2019 research from the Woods Hole Oceanographic Institution debunked a longstanding myth that polystyrene and its foam cousin last forever in the environment. The research showed that sunlight degrades polystyrene into “dissolved organic carbon and trace amounts of carbon dioxide, at levels far too low to impact climate change,” and that this transformation takes place within centuries and possibly within decades.

So it is odd that such a tiny piece of the plastic packaging waste stream occupies a conspicuously large and negative place in the Ellen MacArthur Foundation’s circular economy crusade.

Released in 2016, The New Plastics Economy: Rethinking the Future of Plastics is the EMF’s attempt to “achieve systemic change to overcome stalemates in today’s plastics economy in order to move to a more circular model.”

Unilever is listed as one of the project funders. The forward was written by the president of the U.N. General Assembly.

To the extent that the Ellen MacArthur Foundation ever gets beyond the deliberately vague babble-speak and offers solid policy objectives instead, this report is an example.

A section titled “Selected examples of hard-to-recycle materials and corresponding solutions” singled out polystyrene and arrived at this conclusion: “If the barriers for effective and economically viable collection, sorting, cleaning and recycling of PS cannot be overcome, other packaging solutions could be considered.”

The suggestions for replacement food packaging included paper, cardboard, and even the PET plastic favored by Coca-Cola, Danone, and Nestlé—the planet’s plastic bottle behemoths and perhaps not coincidentally some of the very biggest corporate partners of the Ellen MacArthur Foundation.

Even the suggestion of paper replacements was dubious. The report praises McDonald’s (one of more than 100 firms listed as EMF members) as a pioneer on this point: “McDonald’s began to phase out its iconic clamshell foam hamburger box in 1990 and is now phasing out styrofoam beverage cups.” Yet the environmental logic for the McDonald’s decision disappeared faster than hot Big Macs.

A 1991 study published in Science magazine compared the life cycle impact of disposable cups made from both polystyrene and paper. Martin B. Hocking, a chemistry professor at the University of Victoria in British Columbia, found that producing a paper cup instead of one from polystyrene foam consumed 14–20 times more electricity and twice the water. Hocking concluded that “polystyrene foam cups should be given a much more even-handed assessment as regards their environmental impact relative to paper cups than they have received during the past few years.”

In the next installment, EMF’s circular economy cannot lead to an economic promised land.