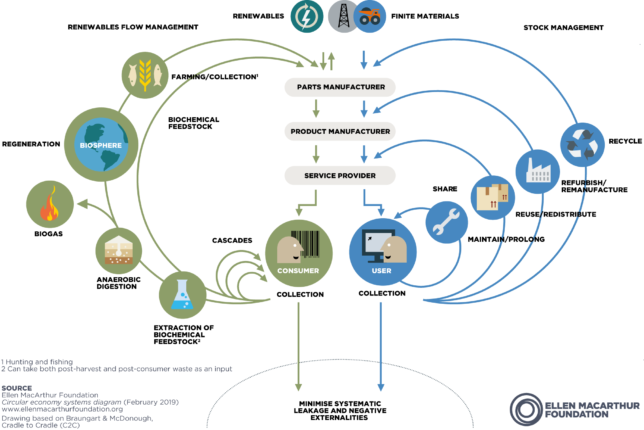 Worshiping the Absolute Sanctity of Everything

A circular economy has also been tried and revealed to be very messy.

In more primitive days of just a bit more than a century ago, we had a circular economy for human waste, which at its “highest value” was prized for its ability to “regenerate nature.” Humans produced a lot of it, but quite a bit was also left in smelly piles on the streets by the horses we still needed.

Fortunately, modern farming now uses far more effective synthetic fertilizers (and one of the most important is made possible by natural gas). But unlike the circular economy of our recent past, human waste no longer has value. It’s now just definitively “waste”—nasty, smelly waste that needs special sewage systems and treatment to dispose of properly.

And yet, this recently . . . wasteful . . . behavior has provided us with “an economic system that delivers better outcomes for people.” Our environment is better off as well.

Even though nature doesn’t improve on how it cleans up after itself, people have made profound progress. Modern sanitary landfills and trash collection are a manmade land conservation miracle. Drive by an old landfill today and you might mistake it for a golf course, or a public park – because that’s what they often become. An Environmental Protection Agency (EPA) primer on repurposing landfills reports that “increasingly common end uses include parks, hiking trails, wildlife habitat, sports fields, and golf courses.”

Freshkills near New York City, until 2001 the largest landfill on Earth, is a premier example. It has since been transformed into a refuge where ospreys and other wildlife thrive.

How’s that for recycling?

Successful reuse of discarded plastic is another example of remarkable progress in sanitary waste management. But acceptance of all this doesn’t fit within the Ellen MacArthur Foundation’s totalitarian theory that all waste can be eradicated.

According to the EMF’s own data, when plastic beverage bottles are collected for recycling they often find new life as polyester fibers in items such as carpeting and clothing. The 2016 analysis promoting the EMF’s “New Plastics Economy” also reports useful applications for recovered plastic junk in the creation of “plastic lumber,” plastic pipes, and trash bags. In addition to cutting down on the plastic getting thrown away, these second-use products reduce the need for new plastic and the carbon footprint needed to harvest and process trees.

Success? Proof that humans are innovative critters with an endless supply of ideas about how to squeeze every nickel of value out of materials and in the process tidy up the place a bit?

By any reasonable analysis, the answer should be a resounding “YES!”

But not for the Ellen MacArthur Foundation. The EMF report portrays these aftermarket plastic products as failures that represent “just one additional use cycle rather than creating a truly circular model.”

Many conventional religious faiths venerate specific objects, people, or creatures. The circular economy, as practiced by the Ellen MacArthur Foundation and its allies, promotes the absolute sanctity of everything, where every single molecule we use must be preserved and nothing may be discarded.

Some of our stuff must eventually lose all reasonable value, relative to what it could be replaced with, so its “highest value” (to borrow the EMF phrasing) is to be put where it inflicts no damage. Worthless items not disposed of properly acquire negative value because they pollute the value of what we truly treasure, such as landscapes and oceans.

That’s why it’s a smart investment for wealthy nations to build sanitary waste management systems that elevate the value of worthless items from negative to neutral. The component parts in a landfill may have lost individual value. But the land itself can be repurposed into parks, ballparks, and more.

A less dogmatic religion might encourage more of this as clever a plan to “eliminate waste and pollution” and “regenerate nature.”

The most successful “circular economy” outcome for plastic in America is to turn it into electricity. An EPA report (using 2018 data) shows 15.8 percent of discarded plastic was used for “combustion with energy recovery,” versus only 8.7 percent recycled and 75.6 percent put in a landfill.

The recycling rate for even the easiest to repurpose plastics was less than 30 percent. According to a 2021 New York Times report: “Though many American communities dutifully collect plastic for recycling, much of the scrap has been sent overseas, where it frequently ends up in landfills, or in rivers, streams and the ocean.”

The top destinations the Times listed were China, Malaysia, and Indonesia. According to Our World in Data, these three nations put together accounted for more than 20 percent of the plastic trash reaching the ocean in 2019.

The Ellen MacArthur Foundation would have done more to protect the oceans if they had run a campaign to convince those dutiful household recyclers that it was okay to throw the plastic trash into a sanitary American landfill.

Perhaps they should have replaced the logos on curbside recycling bins with photos of plastic bottles floating down some dirty river in Malaysia on the way to the ocean.

In the next installment, many of EMF’s strategic partners are major plastics users.