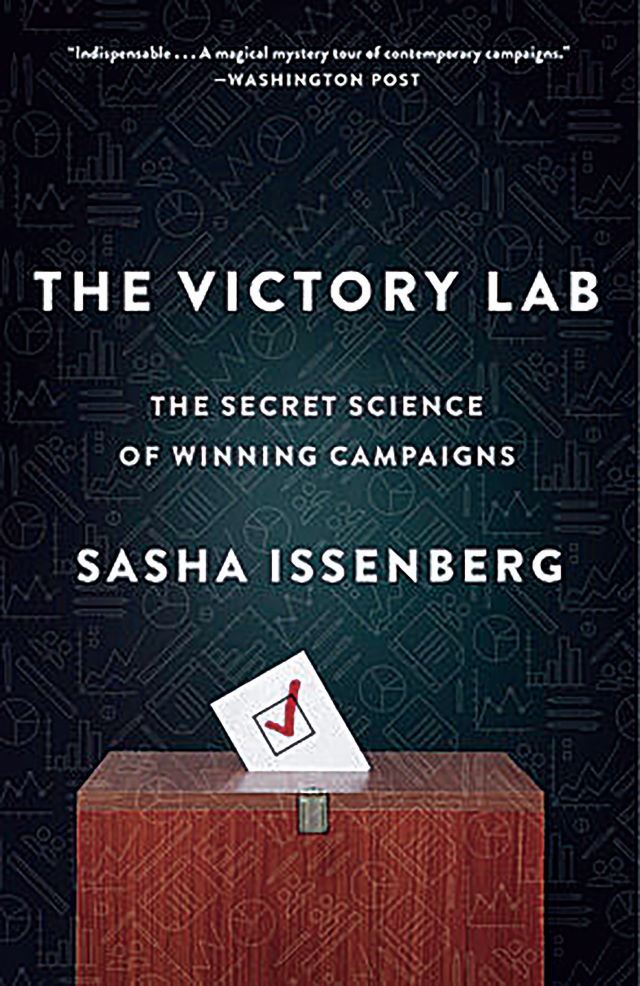 A lot of popular wisdom about what influences the outcome of elections should have been upended back in 2012 with the publication of "The Victory Lab: The Secret Science of Winning Campaigns." The lessons from this important book remain unlearned by nearly all voters, much of the media, and even many candidates. Credit: Penguin Random House. License: https://bit.ly/3gRFwbn.
by Ken Braun

Decades of political mail from nearly every serious candidate and committee has consisted of full-color brochures sporting high-quality ink on expensive paper. The professional production value often looks sharper than the stuff sent from the local Lincoln dealership. For a campaign to mail anything less would portray an image akin to that of a job applicant wearing pajamas to the interview.

Or so the thinking goes.

A lot of popular wisdom about what influences the outcome of elections should have been upended back in 2012 with the publication of The Victory Lab: The Secret Science of Winning Campaigns. Written by journalist Sasha Issenberg, the book described the evolution of voter microtargeting and behavioral science research tactics, and the arms race between high-level Democratic and Republican campaigns to invent new weaponry. The lessons from this important book remain unlearned by nearly all voters, much of the media, and even many candidates.

With a resume that includes a fellowship at Harvard’s Kennedy School of Government and political reporter gigs at the Boston Globe and Slate, Issenberg’s professional pedigree rests comfortably within the traditional media establishment. His book was showered with compliments from these peers when it was released nearly nine years ago. In a Washington Post review, grizzled veteran political reporter Jeff Greenfield called it “indispensable” and a “magical mystery tour of contemporary campaigns.” Issenberg also made the broadcast interview rounds, including at snooty state-funded media programs such as NewsHour on PBS and Weekend Edition on NPR.

So, this was not the work of a right-of-center political operative intending to sound the alarm—eight years in advance—about the machinery deployed by the Left in 2020 to put Joe Biden in the White House. Yet still, Victory Lab repeatedly dropped hints that voter engagement/registration programs, supposedly nonpartisan and nonprofit (i.e.: charitable) operations under the law, are in fact funded and run by ruthlessly partisan appendages of the Democratic-left machine.

Fast forward to the fall of 2020, when mailboxes in swing states were carpet-bombed more than once per week with cheap, photocopied, 8.5 x 11 sheets of plain white paper, printed with simple black ink script. The clever strategy behind these ugly mailings would have been familiar to anyone who had read Victory Lab back in 2012.

Some of the crude mailings promoted partisan messages regarding where the presidential candidates supposedly stood on hot button issues. Others provided absentee ballot applications and encouragements to vote early. “Lowering Prescription Drug Prices” was written in bold lettering on one: Joe Biden’s position was identified with a boldface “Yes” and Donald Trump with an equally bold “No.”

Anyone with access to a personal computer from the early 1980s or a hand-cranked mimeograph machine from the late 1950s could have quickly produced hundreds of these mailings in their basement. It looked like the work of amateurs. It was everything but that.

The organization at the center of the story was Women’s Voices Women Vote, a supposedly nonpartisan organization dedicated to increasing voter participation. But back in 2012 Issenberg outed their real agenda: “Even though the group was officially nonpartisan, for tax purposes, there was no secret that the goal of all its efforts was to generate new votes for Democrats.”

The book reports on research explored in 2011 by a Women’s Voices consultant affiliated with the Analyst Institute, a for-profit political message testing firm for Democrats. Organizations working with Analyst began exploring the effectiveness of sending primitive political mailings resembling (according to Issenberg) a letter from “the homeowner’s association announcing a policy change.”

The tests revealed that ugly mailings dramatically outperformed pretty ones. In one example a left-leaning ballot committee in Oregon sent traditional “glossy” mail promotions to some precincts, but to others the pretty stuff was replaced with “voter guides” that consisted of “text heavy” cut-rate flyers. The Oregonians found they could boost their vote tally by 5 percentage points with the dull-looking voter guides.

The same Women’s Voices profiled by Issenberg in 2012 is the parent organization responsible for the plain black and white, cheap paper mailers that hit swing state voters in 2020. The subsidiaries sending the 2020 mailings were the Voter Participation Center (VPC), a 501(c)(4) nonprofit political organization that is legally required to be nonpartisan, and the Center for Voter Information (CVI), a 501(c)(3) nonprofit that is also supposed to be nonpartisan.

The not-so-nonpartisan CVI was responsible for the “prescription drug prices” mailing noted above. FoundationSearch, a recordkeeping service for charitable donations, lists several large left-leaning foundations and left-wing environmental organizations as past supporters of CVI, including the Sierra Club, the Tides Foundation, and the MacArthur Foundation. A comprehensive and up-to-date profile of its support is not available: The Center for Responsive Politics (OpenSecrets.org) describes CVI as an “outside spending group” that “does NOT disclose its donors to the FEC.”

Although organizationally a sibling of CVI, the VPC’s 501(c)(3) tax status requires it to steer clear of partisan attempts to influence elections. But as Issenberg reported, this group is happy to skirt the law as it works to “generate new votes for Democrats.”

According to FoundationSearch, since 2018, VPC has received its largest identifiable donations from foundations with a history of funding left-of-center causes, such as the Enlight Foundation ($1.5 million) and the Proteus Fund ($900,000). Singer and film star Barbara Streisand has also made VPC part of her act: Her foundation gave a $15,000 grant in 2018.

The grant description from the famously partisan Hollywood Democrat’s foundation said the 15 large was to be used to “promote free and equal opportunities to voting for all.”

In a February 2021 postmortem on the 2020 election, Time magazine credited VPC with sending 15 million vote-by-mail ballot applications to “people in key states.” The Time account didn’t specify what was meant by the revealing phrase “key states,” nor mention at all the partisan agenda of VPC supporters.

Instead, praising VPC for its election work during the pandemic, Time stated blandly that “in a normal year” the VPC “would have supported local groups deploying canvassers door-to-door to get out the vote.” The accidentally ironic headline of the Time article was: The Secret History of the Shadow Campaign That Saved the 2020 Election.

But readers of Victory Lab knew the secret Time was keeping in the shadows from its readers: No matter the year, VPC’s agenda has always been to use its supposedly nonpartisan, nonprofit status to increase the number of partisan Democratic voters in states key to winning the White House.

Barbara Streisand may have claimed her money would “promote free and equal opportunities to voting for all,” but the webpage of the VPC repeatedly announces its intent to mobilize only voters in a “new American majority.” This is very narrowly defined as “people of color, unmarried women, and young voting eligible Americans.”

If you think—for example—that a rarely voting rural gun enthusiast who attends the local Protestant megachurch is a target of VPC’s “new American majority” outreach, then you are probably still sending your holiday wish lists to the North Pole.

Or believing what you read in Time magazine.

In the next installment, learn about the political innovations explained in Victory Lab.