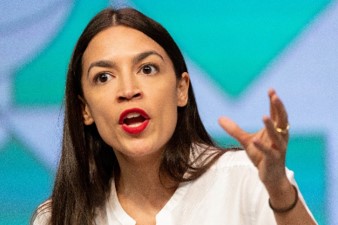 The rollout of the Green New Deal began when U.S. Rep. Alexandria Ocasio-Cortez (D-NY) shipped out an explanatory FAQ loaded with seemingly outlandish speculations, such as one regarding how fast her proposal would “fully get rid of farting cows and airplanes. Credit nrkbeta. License: https://bit.ly/39pxEIl.
by Ken Braun

What she derides as “profligate energy use” is at the core of our economic growth and material prosperity. If energy use declines, as she says it must if we’re going to switch over to windmills and solar panels, then prosperity must decline with it. She is being brutally honest. The history of industrial civilization reveals a strong link between economic growth and energy consumption. Reduce overall energy consumption and there will be an almost certain sharp decline in the amount of “stuff” we’re used to buying. When Ocasio-Cortez’s office sent out that controversial explanatory document, it wasn’t an exaggeration, but instead a truth-telling trial balloon.

On Fire frankly explores this truth. The proposed energy budget Klein arrives at with the help of two climate scientists is a 10 percent reduction in energy output per year for a couple of decades. She concedes this is “virtually unprecedented since we started powering our economies with coal” and that drops of more than a single percentage point have generally been associated with major economic disruptions. She writes that only during the Great Depression did American energy use decline annually by more than double digit percentages.

The scientific prescription rendered by Klein’s experts is thus “radical and immediate de-growth strategies in the US, EU and other wealthy nations.” All well and good, she says, but “we happen to have an economic system that fetishizes GDP growth.” So, evading “catastrophic warming” cannot happen “within the rules of capitalism.” We need to “break every rule in the free-market playbook.”

And it won’t be pretty. She says this is not a “problem that can be solved simply by changing what we buy—a hybrid instead of an SUV, some carbon offsets when we get on a plane.” Nope, the Green New Deal means “the world’s most manic consumers are going to have to consume less.”

Think on all the assumptions baked into this. Hybrids are a small fraction of the vehicles on our roads and SUVs are so popular that (except for the Mustang and a single subcompact) Ford will soon cease production of cars. Americans are demanding more and more seats on airplanes every year and probably not 1 in 100 can even explain a carbon offset. It is a laughably distant myth, this fantasy world where the American consumer masses drive around in tiny hybrid golf carts and reliably pay someone to plant some trees before they jet the family off to Disney World.

Yet Klein informs us even this would be a piddly effort, and we’ll need to give up much more to get the Green New Deal done. It’s probably fair to guess she thinks a lot fewer of us would be flying the kids to Disney or even driving to Disney and that there probably shouldn’t even be a Disney. Imagine the uproar if Ocasio-Cortez’s infamous memo had put its green crosshairs on America’s favorite mouse.

She scolds us for our “cult of shopping” and says in more than one spot that “there will be changes to the way the wealthiest 10–20 percent of humanity has come to live.” Read that line carefully: She isn’t talking about the richest 10–20 percent of Americans, but of everyone on the planet. The GDP per capita of Earth is a little more than $11,000, while the number for the USA is just less than $63,000. Just waking up in the United States puts almost all of us in the world’s “richest 10-20 percent” targeted by these big lifestyle change.

In the next installment, find out about the critical role of global transfer payments.