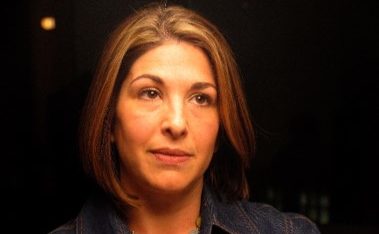 Naomi Klein doesn’t refer to her own position as “climate alarmism,” but she should. She believes that the climate is getting hotter very quickly, humans are causing it all, catastrophic consequences for humanity are the inevitable result, and nothing less than a war against capitalism will save us. Credit: Truthout.org. License: https://bit.ly/2tgNzbq.
by Ken Braun

And that gets to another big and ugly, yet inescapable, truth about the Green New Deal: global transfer payments.

The rich nations of the world cannot unilaterally cool the planet. The math is ludicrously lopsided. The United States, the largest economy and second largest carbon emitter, produced 5.3 billion metric tons of carbon in 2017, up just 1.8 percent from 1992, according to a July 2019 report from USA Today. China, the second largest economy and largest carbon emitter, racked up 9.8 billion metric tons of carbon in 2017, up 270.3 percent from 1992. The latest International Monetary Fund estimate places China’s GDP per capita at about $10,000, while Americans produce almost $63,000 per person.

China has one billion more people than the United States, and they all want to catch up to our standard of living. Already the world’s top carbon emitter, China is not going to freeze its economic status at one-sixth the average output per person of the Americans, and neither will the large populations of India, Indonesia, or Brazil.

The only peaceful path to hitting the Green New Deal’s goals is to give developing nations a reason to play along. As Klein explains in On Fire, this will require a “managed transition to another economic paradigm,” where “increases in consumption should be reserved for those around the world still pulling themselves out of poverty.”

So the Green New Deal prescription isn’t just one of Americans slowing our relentless quest for each generation to live richer than the next (which we are showing zero signs of agreeing with) or of Americans deliberately falling backward economically (which would obviously be much less popular), but of Americans doing all of this because we need to let the Chinese better themselves at our expense. Imagine the uproar if the Ocasio-Cortez talking points had been sincere enough to spell out that agenda.

Again, to Klein’s credit and unlike the politicians pushing her agenda, she doesn’t finesse away what is desired. She repeatedly declares that capitalism and the “fetish” of economic growth is causing an impending ecological doomsday and that ending it all is the only way out. “We must stop competing with each other,” she warns.

But Klein’s honesty comes undone when she must choose between socialism and the climate. Even giving her a too generous benefit of doubt that the radical climate doom forecast is 100 percent accurate and that this would make her radical carbon targets necessary, there are serious proposals aimed at hitting those targets. She goes out of her way to denounce them.

A main offender is nuclear energy. Zero-carbon nuclear energy provides about 72 percent of France’s electricity. For decades the French have operated one of the world’s wealthiest economies by emitting just 5.3 metric tons of fossil fuel carbon per person. That’s less than one-third the United States, but more importantly it’s also significantly less than China (7.1 metric tons per person). While nuclear is usually a more expensive option than fossil fuels, France is proof that a low-carbon nuclear electricity grid can coexist with economic growth.

Nuclear power is just a small portion of the electricity mix for the planet’s top four carbon-emitting countries: China (4.2 percent nuclear-generated electricity), the United States (19.3 percent), India (3.1 percent) and Russia (17.9 percent). If the planet is truly On Fire, then the politically quickest route to carbon cooling would be a crash program to convert those nations to nuclear power.

To all this Klein says nuclear energy can never be “clean” and is “expensive and slow to roll out compared with renewables.”

Though Germany is a nation Klein singles out as a noteworthy success in rolling out renewables, she fails to note Germany’s carbon output per person is 83 percent higher than neighboring France and its nukes.

She also unintentionally demolishes the economic case for renewables in several spots, arguing for example that the American “green economy is already creating more jobs than oil and gas.” Even if that were true, the oil and gas economy is obviously much larger. So, since economic efficiency is literally output per worker, she is really saying the American “green economy” has been a stupendously inefficient waste.

The World Nuclear Association reports 140 ships currently sailing the oceans under nuclear propulsion, most of them owned by the navies of the world’s biggest carbon-emitting nations (USA, Russia, China, and India). The U.S. Navy alone has operated 526 nuclear reactors through almost 150 million miles ocean over half a century “without a single radiological incident.”

While more expensive than what we’re doing, rolling out stationary nuclear plants across the USA is quite feasible and would keep most of the modern American economy running prosperously. Two centuries ago the world’s great navies ran ships on a different form of zero-carbon power: wind. Switching the modern economy over to a heavy reliance on the wind makes almost as little economic sense as turning an aircraft carrier into a sailboat.

There are many reasons to doubt the sincerity of Klein and her allies when they sell predictions of environmental doomsday. At the top of the list is her dishonest refusal to consider options that might leave us all with something of our prosperous lives still in place. If the planet was really Klein’s urgent priority, then she’d be willing to set the socialism aside and talk up the nukes.

In the next installment, explore the absurdities of the green future.