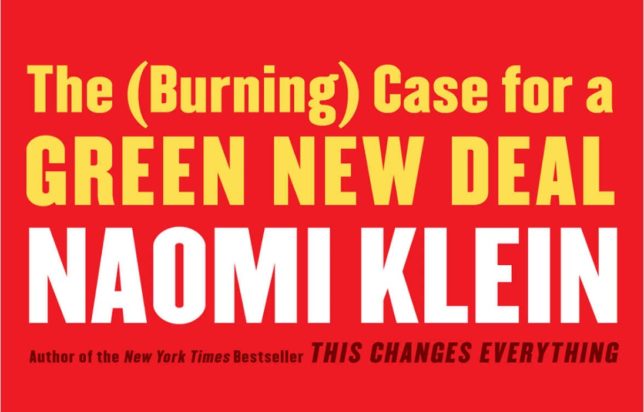 On Fire: The (Burning) Case for a Green New Deal
by Ken Braun

The rollout of the Green New Deal was rough. It began when U.S. Rep. Alexandria Ocasio-Cortez (D-NY) shipped out an explanatory FAQ loaded with seemingly outlandish speculations, such as one regarding how fast her proposal would “fully get rid of farting cows and airplanes.” Many Democratic co-sponsors weren’t ready to jet home and tell voters to stop eating cheeseburgers, so the ensuing PR guano storm caused Ocasio-Cortez’s office to beat a somewhat orderly retreat. Predictably, she received protective covering fire from the mainstream media: “The resolution doesn’t do any of those things,” huffed the New York Times.

It wasn’t easy being Green. But then a couple of weeks later—from supposedly decades into our future—came back a message from an older and triumphant Ocasio-Cortez. In an animated video co-written with filmmaker Avi Lewis and executive produced by his wife, writer and noted climate activist Naomi Klein, Ocasio-Cortez assured us we eventually implemented her proposal and that the future it created was a prosperous techno-marvel filled with limitless union jobs (imagine Star Wars, except there’s no “wars” and Princess Leia is a Teamster boss).

How did we get from here to there? Ms. Klein has literally written the book: On Fire: The (Burning) Case for a Green New Deal.

It is a halfway honest examination of the goals of the Green New Deal. And by “halfway honest,” I mean to say that despite evasions it is immensely more sincere than almost everything else you’ll read from other proponents (or the media attempting to explain same, such as the New York Times). For example, On Fire straight out says we cannot “sustain the impossible dream of luxury for all” and that “air travel, meat consumption, and profligate energy use” must go on our chopping block.

In forthrightly saying we’ll cut way back on the cows, this “burning case” for the Green New Deal is just getting warmed up. Fans of economic growth (and reasonably priced steaks) should encourage every moderate Democrat they know to read it. What Klein is unabashedly arguing for will scare them the hell away from the Green New Deal.

In one chapter, Klein visits the free-market Heartland Institute’s 2011 International Conference on Climate Change and reports on several attendees who declare her brand of climate alarmism “an attack on middle-class American capitalism” and a “Trojan horse whose belly is full with red Marxist socioeconomic doctrine.” From Heartland’s then-president Joe Bast, she hears that climate alarmism is “the perfect thing” for leftists because it allows them to do everything they wanted to get away with anyway.

And then she drops this: “Here’s my inconvenient truth: they aren’t wrong.”

“The deniers did not decide that climate change is a left-wing conspiracy by uncovering some covert socialist plot,” writes Klein. “They arrived at this analysis by taking a hard look at what it would take to lower global emissions as drastically and as rapidly as the climate science demands.” Their assumption that “capitalism itself” is “coming under threat” is not happening “because they are paranoid,” she concludes, but instead “because they are paying attention.”

Klein doesn’t refer to her own position as “climate alarmism,” but she should. She believes that the climate is getting hotter very quickly, humans are causing it all, catastrophic consequences for humanity are the inevitable result, and nothing less than a war against capitalism will save us. It’s an “emergency,” she says repeatedly, and nothing short of drastic emergency measures will suffice. This book is a deliberate, loud, and ceaseless climate alarm.

She frequently criticizes environmentalists and left-leaning politicians unwilling to honestly ring that alarm. Klein says the Heartland audience is “considerably less in denial than a lot of professional environmentalists, the ones who paint a picture of global Armageddon and then assure us that we can avert catastrophe by buying ‘green’ products and creating clever markets in pollution.”

Unlike Klein, many Green New Deal politicians don’t let on that avoiding the metaphorical climate hell fires means giving up worldly possessions and getting up early for church. She is resolutely in the fire and brimstone branch of sermonizing. As a board member of 350.org, an instructor at Rutgers University, and a senior correspondent for The Intercept, she is a highly respected climate activist. On Fire fails to consider the severe economic calamity baked into its anti-capitalist recommendations, engages in arrogant wishful thinking in its assumptions that Americans will go along with them, and is flat-out dishonest in dismissing alternative solutions (such as nuclear energy). But when Klein writes about what the Green New Deal crowd has really signed up for and what it will take to get us there, she pulls no punches and tells no lies.

In the next installment, find out how the Green New Deal must limit energy use.