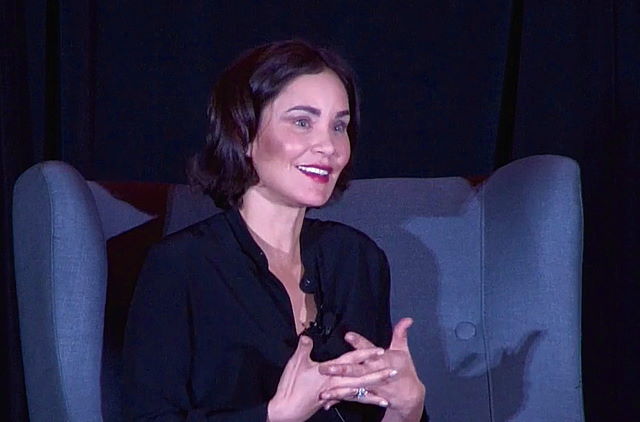 The Action Now Initiative based in Houston, Texas, was established by John Arnold (not shown), a hedge fund billionaire, and his wife Laura Arnold. John Arnold is a former executive for the scandal-plagued and bankrupt energy firm Enron. Credit: Stanford PACS. License: https://bit.ly/3jlcSA9.
by Fred Lucas

This near miss in New York City’s first experience with ranked-choice voting is far from the first controversy involving the system that has been pushed financially by the Left and in some cases is being embraced by some on the right.

In 2018, Rep. Bruce Poliquin (R-ME) won the plurality as the first choice of voters. But failing to win 50 percent, he ultimately lost his race for reelection to Democrat Jared Golden after subsequent rounds of counting.

Thus far, 17 percent of candidates who won a plurality as the first choice of voters ended up losing the election, according to a 2019 study by the Maine Policy Institute that looked at 96 ranked-choice elections nationally.

The Maine Policy Institute is a conservative think tank that opposed adopting RCV in the state.

North Carolina scrapped its ranked-choice voting for judicial vacancies that it adopted in 2006. State lawmakers repealed the reform in 2013 because of two judicial elections in 2010 where a statewide Court of Appeals race and a districtwide Superior Court race—resulted in several rounds of counting.

A 2014 review by professors from the University of North Carolina and Ohio State University looked at four elections in Washington State and California that used ranked-choice voting and found, “the winner in all four elections receive less than a majority of the total votes cast.”

“Thus, it is possible that the winning candidate will fall short of an actual majority when a substantial number of ballots are eliminated, or ‘exhausted,’ during the vote redistribution process,” the report said, adding that “there is some probability that a voter’s ballot will become exhausted, eliminating their influence over the final outcome.”

The Action Now Initiative based in Houston, Texas, was established by John Arnold, a hedge fund billionaire, and his wife Laura Arnold. Arnold is a former executive for the scandal-plagued and bankrupt energy firm Enron.

Kathryn Murdoch has been the largest donor to the Denver, Colorado-based Unite America to convince Alaska voters to say yes to ranked-choice voting in November. She is also the largest donor to Unite America, donating $3.8 million of $5.1 million that the political action committee (PAC) received in 2019. Kathryn Murdoch and her husband James Murdoch, son of Rupert Murdoch, are co-founders of the liberal Quadrivium Foundation.

“A strong democracy is the foundation for progress on every issue that we care about,” Murdoch said in a March 2020 statement about funding Unite America. “Therefore we must take urgent action to address our increasingly polarized and gridlocked system that is at present incapable of putting the needs and aspirations of citizens and their communities first.”

Unite America casts itself as a centrist and nonpartisan organization. But Murdoch worked for the Clinton Foundation from 2007 to 2011 conducting strategy and communications work for the Clinton Climate Initiative.

Serving with Murdoch as co-chair of the board at Unite America is Shawn Riegsecker, the founder and CEO of an advertising company. He donated to President Barack Obama’s 2008 and 2012 campaigns and the Democratic National Committee Services Organization.

Other big donors to Unite America include video game developer Riot Games co-founder Marc Merrill and Panera Bread founder Ron Shaich, both board members. Both have also been Democratic donors. Another board member is Greg Orman, a one-time perennial candidate who has run for governor and senator in Kansas both as an independent and as a Democrat.

Unite America is a “hybrid political action committee,” which means it operates as both a super PAC that is allowed to make unlimited, independent expenditures to help candidate campaigns and as a traditional PAC that makes direct contributions to candidate campaigns. Unite America professes to back centrist and independent candidates from both parties. However, it has generally backed moderate Democrats.

Unite America has funded Alaskans for Better Elections, which ran that states ranked-choice voting movement; Pennsylvanians Against Gerrymandering, which supports independently drawn districts; and Ranked Choice Voting 2020, the group that handled the failed effort in Massachusetts.

The group changed its name to Unite America PAC in 2018 and backed independent candidates for state legislative races in Colorado, Washington, Maine, Oregon, Arizona, New Mexico, and Alaska. In Colorado, the secretary of state’s office determined Unite America had violated state campaign finance laws–even though none of its candidates won.

Thus, it shifted its strategy to supporting ballot initiatives.

In the next installment, increasing numbers of U.S. jurisdictions—especially local—have adopted ranked-choice voting.