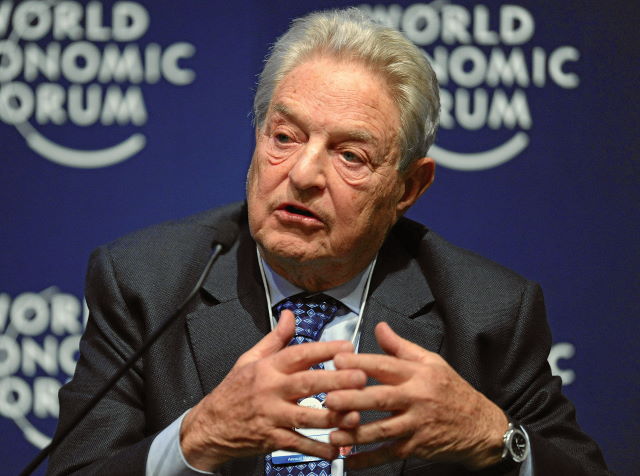 While FairVote is officially nonpartisan, major donors have generally come from the Left. These include the George Soros–sponsored Open Society Foundations, the Jennifer and Jonathan Allan Soros Foundation, and the Soros Fund Charitable Foundation. Credit: World Economic Forum. License: https://bit.ly/3C23dpw.
by Fred Lucas

The Committee for Ranked Choice Voting, founded by former Maine elected officials and activists, is the political action committee that has pushed several key RCV initiatives since it was founded in 2014.

Former Maine State Sen. Dick Woodbury (I-Cumberland County) has been the chairman of the PAC since it was established in 2014. Cara Brown McCormick, a former aide to both Sen. Joe Biden (D-DE) and John Kerry (D-MA), serves as the treasurer of the group. McCormick is also the CEO of Level the Playing Field, a pro-independent candidate group and a leading funder of ranked-choice voting.

The Committee for Ranked Choice Voting expanded beyond Maine after the successful 2016 election.

The Kathryn Murdoch–financed Unite America gave $145,000 to the Committee for Ranked Choice Voting in 2020. Jonathan Soros contributed $125,000 to the group. Billionaire investor Nelson Peltz contributed $50,000, and California donors Mary and John Palmer gave $75,000 to the committee, according to a 2020 report by the William and Flora Hewlett Foundation.

Ackerman is also the key funder of Level the Playing Field, which gave more than $500,000 to the Chamberlain Project Foundation. The Arnold-backed Action Now Initiative gave $1 million to the foundation. New York real estate investor William Ackman gave $100,000 to Chamberlain.

The leading activist group for ranked-choice voting nationally has been FairVote, a nonprofit based in Takoma Park, Maryland. Political activists, educators, and former government officials launched the group in 1992 in Cincinnati, Ohio, originally calling it Citizens for Proportional Representation. It changed its name to FairVote in 2004.

FairVote spent $375,000 to back the ballot initiative in 2016 to make Maine the first state in the nation to adopt RCV.

While FairVote is officially nonpartisan, major donors have generally come from the Left. These include the George Soros–sponsored Open Society Foundations, the Jennifer and Jonathan Allan Soros Foundation, and the Soros Fund Charitable Foundation.

Big donors to FairVote are also in the non-Soros realm, such as the Laura and John Arnold Foundation, run by the same family that has pushed RCV through the Action Now Initiative; William and Flora Hewlett Foundation, founded by the founder of Hewlett-Packard and his wife; and some of the largest grantmaking institutions to various left-wing causes: the Tides Foundation, the Joyce Foundation, the John D. and Catherine T. MacArthur Foundation, and the Rockefeller Brothers Fund.

Other major funders to FairVote are the liberal organizations Carnegie Corporation of New York and the Public Welfare Foundation, a group that focuses on criminal justice, juvenile penal changes, and labor union–backed employment policy, as well as the

FairVote is not a single-issue group. It also supports universal voter registration. With significant irony, the group wants a national popular vote in presidential races, arguing the Electoral College is undemocratic—ignoring that more top vote-getters in RCV elections have lost than the five times in American history the Electoral College didn’t reflect the popular vote.

Former U.S. Rep. John Anderson (R-IL), who was an independent candidate for president in 1980, was FairVote’s first executive director. Robert Richie is the current CEO of FairVote.

The RCV effort is clearly gaining momentum with support and financing by many of the same leftist groups and individuals that complain about a lack of democracy.

While the most recent accounting found less than one-fifth of RCV races in the United States resulted in the first-place vote recipient losing the election, that number is bound to proliferate as more jurisdictions adopt the formula. The goal might be to bring less polarization, but the unforeseen circumstances could lead to even less trust in American elections.

This article was published in the November/December issue of Capital Research magazine.