Players in the Russia Collusion Hoax: The Activists, Part 1 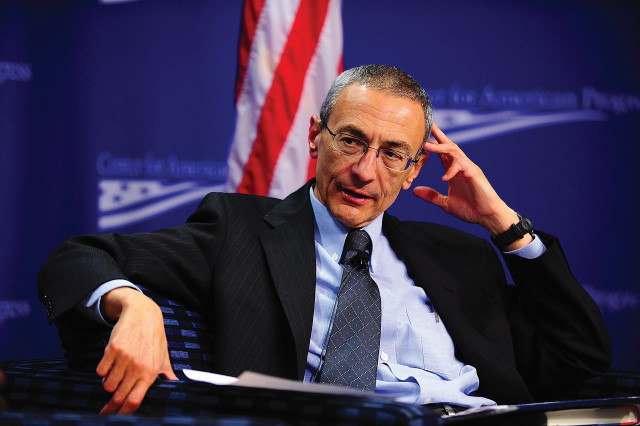 John Podesta is central figure in Trump-Russia investigations. As Hillary Clinton’s campaign chairman in 2016, he was among the 53 Obama and Comey-era officials subpoenaed by the Senate Judiciary Committee in June 2020. Credit: Center for American Progress. License: https://bit.ly/3jBypSY.
by J.D. Gordon

But it was complicit activist groups that wrapped it all together with a bow on top.

Investigative reporter Chuck Ross, who has written hundreds of stories on Trump-Russia, summarized:

Those groups are just as important, in my opinion, as the FBI’s role. They provided the opposition research and the punditry that kept the Trump-Russia collusion narrative alive for so long.

Although there was no shortage of grifters cashing in on Russiagate, a few groups stand out and deserve closer scrutiny.

Even as late as June 2020, after the Trump-Russia collusion narrative was thoroughly debunked by the 448-page Mueller Report and 57 House Intelligence Committee investigation transcripts of Trump-Russia witnesses, the Moscow Project’s podcast The Asset still proclaims the following in bold on its homepage:

In 2016, Donald Trump conspired with a foreign government to become President. On July 25, 2019, with the election around the corner, he decided to do it again.

The Asset explores how Trump acts on behalf of Russia’s interests, breaking down his ties to Russia and his effort to extort the Ukrainian government for personal political gain.

The Moscow Project Analysis section includes incendiary and wildly misleading reports such as “Putin’s Payout: 12 Ways Trump Has Supported Putin’s Foreign Policy Agenda” and “Trump’s Russia Cover-Up by the Numbers: 272 Contacts with Russia-Linked Operatives.” The Briefing section includes a steady stream of inflammatory and biased dispatches, explainers and reports, such as “Yes, Collusion. Yes, Obstruction.” Those reports are shared with media for maximum consumption and regurgitation. Media reports are used to raise more money, and the cycle repeats itself.

The CAP Action Fund, which pays for The Moscow Project, showed revenues over $9 million in its 2017 tax filings. For 2019 donations, the website lists a gift of $1 million or above from one anonymous donor and gifts between $100,000 and $1 million from nine anonymous donors. Named major donors at $500,000 to $1 million include the George Soros–funded Open Society Policy Center and a billionaire real estate developer. $100,000 to $499,000 named donors include an investment bank CEO and a billionaire investment banker who is married to Sen. Dianne Feinstein (D-CA), who sits on the Senate Intelligence and Judiciary Committees.

CAP’s founder is John Podesta, former White House chief of staff to President Obama, who remains on the board of directors. Podesta is central figure in Trump-Russia investigations. As Hillary Clinton’s campaign chairman in 2016, he was among the 53 Obama and Comey-era officials subpoenaed by the Senate Judiciary Committee in June 2020.

In CIR’s introductory video, Morgan Freeman references Russian election interference and states, “I’ve called on Congress and our intelligence community to use every resource available to conduct a thorough investigation to determine exactly how this happened.”

While sounding reasonable on its face, by September 2017 when the video was made and posted to YouTube, there was still zero evidence of Trump-Russia collusion or conspiracy, despite thousands of federal and congressional investigators, journalists, activist groups, and internet sleuths frantically searching for over a year. Freeman read lines from a script with apparently little more evidence than pundits on CNN and MSNBC continuously repeating the trope of “where there’s smoke, there’s fire.”

Meanwhile, four months earlier in May 2017, FBI Deputy Director of Counterintelligence Peter Strzok texted his paramour and colleague Lisa Page, noting his reluctance to join Special Counsel Robert Mueller’s team: “I hesitate in part because of my gut sense there’s no big ‘there’ there.”

Too bad nobody told Freeman about the missing evidence. The legendary actor and Academy Award winner is now tainted as a Russiagate pawn who helped damage innocent people.

While long-time Democratic donor Rob Reiner is best known for his left-wing views as Michael “Meathead” Stivic on the 1970s sitcom All in the Family, he should now be remembered for advancing a fake scandal that damaged innocent people.

Reiner and Freeman were aided in forming CIR by the Atlantic’s David Frum, a former speechwriter for President George W. Bush, who later became a conservative-bashing fixture in media talk shows and entertainment programs such as HBO’s Real Time with Bill Maher.

They collectively recruited a high-level Advisory Board, including three former Obama-era cabinet members: Director of National Intelligence James Clapper, a key figure in Russiagate; Secretary of Homeland Security Jeh Johnson, a former Department of Defense general counsel who characterized the 2009 Ft. Hood mass shooting as “workplace violence”; and former Secretary of Defense and CIA Director Leon Panetta, who claimed without evidence in August 2018 that Trump’s behavior shows “clear signal that the Russians have something on him.”

Other board members include:

In the next installment of “Players in the Russia Collusion Hoax,” weigh the contributions of the Democracy Integrity Project and the Brookings Institution.