Players in the Russia Collusion Hoax: The Praetorian Guard

“Exposing Russiagate and the complicit people and activist groups can deter repeats.” 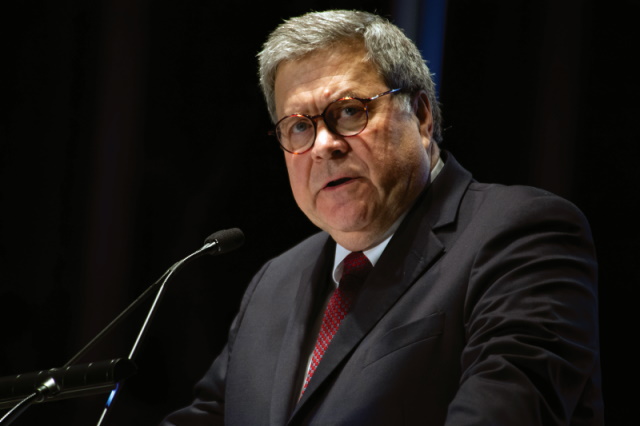 While William Barr’s comment about Praetorian Guards seemingly alludes to individuals within that group of 53, the reality is that arrogant, power-obsessed government officials are merely one element of Russiagate. Credit: U.S. Marshals Service, Office of Public Affairs. License: https://bit.ly/2DqYnJA.
by J.D. Gordon

Summary: Over the past four years, Americans have been inundated by so many Trump-Russia “bombshells” hyping thousands of meaningless and often inaccurate details that seeing the big picture through the dust clouds can be difficult. Cutting through that minutiae-induced haze is central to exposing Russia collusion hoax (“Russiagate”) and complicit people and activist groups that helped fuel what may be the political crime of the century. The conspirators, witting and unwitting, should be publicly named and criticized for their poor choices and held up as examples before the American people.

Over the past four years, Americans have been inundated by so many Trump-Russia “bombshells” hyping thousands of meaningless and often inaccurate details that seeing the big picture through the dust clouds can be difficult. That’s by design. After all, it is hard to notice who is lighting the fuses when fireworks are exploding in every direction.

Cutting through that minutiae-induced haze is central to exposing Russia collusion hoax (“Russiagate”) and complicit people and activist groups that helped fuel what may be the political crime of the century. They maliciously portrayed a rightfully elected president and his associates as Russian agents who stole the election and then enlisted law enforcement and the members of Congress to prosecute the assault. It was a high-tech bid to overturn an election. Most representative republics would label it a coup attempt.

Well-financed organizations with mysterious donors built momentum for a successful impeachment vote on a sequel scandal while damaging if not destroying dozens of innocent people and their families simply for being in President Trump’s orbit.

Despite efforts by the self-appointed #Resistance to sow confusion, serving both to cover their misdeeds while remaining on the attack, one lightning bolt of clarity came in May from Attorney General William Barr during an exclusive interview with CBS Justice Correspondent, Jan Crawford.

Buried midway through and far from the headline, one exchange illuminated the essence of Russiagate:

Jan Crawford: So it’s just as dangerous. So when we talk about foreign interference versus say a government abuse of power, which is more troubling?

William Barr: In my mind, they are, sure. I mean, republics have fallen because of Praetorian Guard mentality where government officials get very arrogant, they identify the national interest with their own political preferences and they feel that anyone who has a different opinion, you know, is somehow an enemy of the state. And you know, there is that tendency that they know better and that, you know, they’re there to protect as guardians of the people. That can easily translate into essentially supervening the will of the majority and getting your own way as a government official.

While Barr spared the viewers a more specific history lesson, it is important to briefly illustrate his point in concrete terms to better understand it.

Ancient Rome was the superpower of its time. Its Praetorian Guard was an elite military unit that provided personal security for Roman leaders. Yet it was much more. Numbering in the thousands with its own fortress at Castra Praetoria, it functioned as a secret service, army special forces, bureaucracy, and secret police all rolled into one.

In 41 A.D., Praetorian Guards and Senators marked Emperor Caligula for death after he humiliated them and depleted Rome’s finances. Three irate guards led by Cassius Chaerea, whom Caligula had mocked for an effeminate voice, murdered him in an underground passage on Palatine Hill. The Praetorians installed Caligula’s uncle Claudius as successor and, when he was poisoned to death in 54 A.D., gave consent for his stepson Nero to rule. When they eventually turned on Nero in 68 A.D., he fled, was declared an enemy of the Republic by the Senate, and then committed suicide.

Praetorians were also involved in the assassination of Commodus in 192. They viewed him as acting beneath the office by participating in gladiatorial fights at the Coliseum, loosely depicted by Joaquin Phoenix in the 2000 Ridley Scott film, The Gladiator. Then Caracalla in 217. Elagabalus in 222. Pupienus and Balbinus in 238.

While America is far less physically savage than Ancient Rome, the same ugly themes of human behavior have not changed. Daggers and swords may be out of fashion, but modern-day praetorians use other ways to put themselves above the law and increase their own power.

In 2016, they profoundly interfered in the presidential election. In July, Comey first aided Democrats by declining to charge Hillary Clinton for gross negligence by operating her own private email server through which top secret information passed while she was the secretary of state. Comey also ignored an admission of false statements by a key witness in the case. Then he aided Republicans with a detailed press conference criticizing her as “extremely careless,” throwing FBI procedures out the window. He helped Republicans again just 11 days before the election by reopening the Clinton email investigation over a laptop seized in a sexting scandal probe of former Rep. Anthony Weiner (D-NY), spouse of Clinton top aide, Huma Abedin.

That was just the tip of the iceberg.

Throughout much of 2016 and 2017, the FBI was building cases against multiple Trump associates and the campaign itself for links to Russian officials, no matter how tenuous. We learned years later from U.S. Department of Justice (DOJ) Inspector General reports, congressional testimony, court proceedings, and DOJ releases to media that those investigations were marked by improper surveillance, entrapment, tampering with official documents, withholding exculpatory evidence, aggressive use of informants, leaks to media, and more.

While Barr’s comment about Praetorian Guards seemingly alludes to individuals within that group of 53, the reality is that arrogant, power-obsessed government officials are merely one element of Russiagate.

That’s because unlike in Ancient Rome where someone such as Praetorian Guards needed physical proximity and access to destroy their leaders, today’s devastating attacks can and are launched from afar by virtually anyone with the money to pay for legal, political, and information warfare.

Limitless government investigations can and do indict and destroy people for unrelated matters as Special Counsel Robert Mueller did to six Trump associates. It would have been more if dozens of others and their attorneys had not successfully navigated perjury traps. Meanwhile, false allegations and misleading narratives from Congress, the media and complicit activist groups can and do ruin careers, businesses, and families—forever casting suspicion on those they victimize. These tactics build synergy and harm a leader’s ability to govern through a vicious cycle of guilt by association, which drives down public support.

Thus, hundreds of individuals were key players in Russiagate.

They include foreign government officials and ex-officials from places such as the U.K., Australia, and Ukraine who engaged in world-class espionage and fabrications, rumor mongering, and election meddling. Members of Congress who continually misled Americans about alleged Trump-Russia collusion when they knew from closed testimony there wasn’t any. Praetorians in the media who selectively published classified and sensitive investigation leaks to paint misleading, toxic portrayals of their targets. Big Tech stifling conservative voices, manipulating internet search results, and allowing relentless cyberstalking of Trump associates. Social media influencers stalked and instigated violence and death threats against Team Trump.

In the next installment of “Players in the Russia Collusion Hoax,” look at the roles played by the Center for American Progress and the Committee to Investigate Russia.