Players in the Russia Collusion Hoax: Weaponizing the Mueller Report 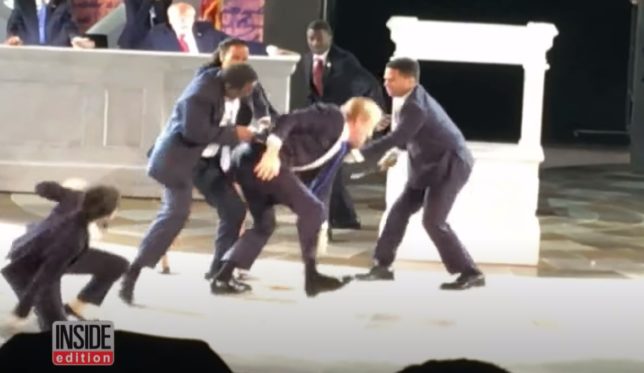 In a June 2017 production of Shakespeare’s Julius Caesar in New York’s Central Park, a group of actors portrayed stabbing to death a man depicting President Trump. Credit: Inside Edition/YouTube.
by J.D. Gordon

Numerous activist groups focus on pushing the Mueller Report itself as a weapon to attack the presidency and those in Trump’s orbit.

Although the 448-page report debunked Trump-Russia collusion conspiracy theories and didn’t reach a conclusion on obstruction of justice, the Mueller prosecutors who wrote it nevertheless relied heavily on rumor and innuendo while omitting exculpatory evidence. In other words, they engaged in political warfare and character assassination. Considering that Mueller chose, or allowed others to choose, an all-star team of Democratic prosecutors including numerous Obama and Clinton donors—including Andrew Weissmann, Jeannie Rhee, James Quarles, Elizabeth Prelogar, Kyle Freeny, Brandon Van Grack, and Andrew Goldstein—the guilt by insinuation that permeates the report should not be a surprise.

Common Cause. Common Cause, a left-leaning advocacy operation claiming to support election law reform, boasted of sending 550,000 copies of the Mueller Report’s 15-page executive summary to swing voters around the country. Two California-based donors paid for the mailing.

The Disney Family’s Dramatic Readings. Law Works Action, a New York-based activist group, produced The Investigation: The Search for The Truth in Ten Acts, an off-Broadway play by Pulitzer Prize winner Robert Schenkkan in June 2019. Advertised as a “dramatic interpretation” of the Mueller Report, it garnered over a million live-stream views by featuring notable actors reading various parts including John Lithgow, Annette Benning, Jason Alexander, Kevin Kline, Alyssa Milano, and over a dozen others. Law Works describes itself as “an organization that engages bipartisan voices and educates the public on the Mueller Report” listing Susan Disney Lord, Abigail Disney, and Timothy Disney as the executive producers.

A low budget, made-for-TV version, America Reads the Mueller Report aired on dozens of local stations around the country last year featuring TV celebrities from the 1980s and 1990s including Morgan Fairchild, Jon Cryer, Tom Arnold, and Montel Williams. Financed with a GoFundMe page, it was produced by social media activist and former columnist/commentator Cheri Jacobus.

The Trump-as-Caesar Play. Coming full circle back to Attorney General Barr’s analogy about Ancient Rome, perhaps it’s fitting to conclude by noting a June 2017 production of Shakespeare’s Julius Caesar in New York’s Central Park in which a group of actors portrayed stabbing to death a man depicting President Trump. That was just one more example of the #Resistance hate-filled obsession with destroying the democratically elected president by any means necessary.

Although activist groups have thus far largely escaped public scrutiny, the evidence clearly shows that they played a significant role in creating and prolonging Russiagate.

While few individuals responsible for Russiagate will ever be charged with crime, much less punished—although former FBI attorney Kevin Clinesmith recently pled guilty to one count of making a false statement—it is important to expose them and their donors to deter repeats.

The DOJ investigation lead by U.S. Attorney John Durham is generally expected to release its report before the November election. Other than having discovered “troubling” evidence of misconduct, little is known about what the investigation has uncovered and whether more people will be indicted.

Beyond the DOJ investigation and potential indictments are many people and organizations that were willingly or credulously complicit in Russiagate. They are largely (and rightfully) protected by the First Amendment. But the First Amendment is a two-edged sword that can just as easily pierce the guilty and complicit. As Justice Louis Brandeis wrote in the Supreme Court’s opinion in Whitney v. California (1927):

If there be time to expose through discussion the falsehood and fallacies, to avert the evil by the processes of education, the remedy to be applied is more speech, not enforced silence.

The conspirators, witting and unwitting, should be publicly named and criticized for their poor choices and held up as examples before the American people.

To that end, CRC has compiled and is publishing and updating an archive of more than 200 of the most prominent people who manufactured and kept the Trump-Russia collusion hoax alive. The archive appears on CapitalResearch.org under the title “The Cast of the Trump-Russia Collusion Hoax.”