Players in the Russia Collusion Hoax: The Activists, Part 2 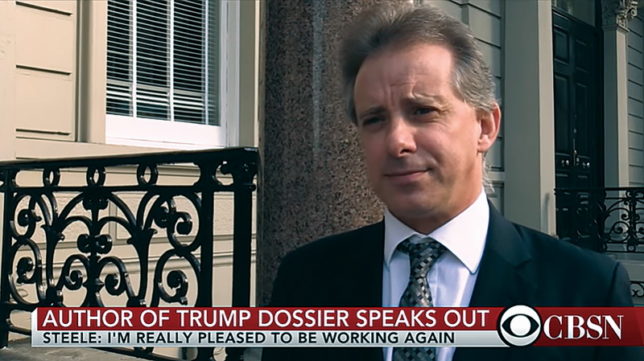 Tax records for 2017 show Jones paid $3.3 million to Bean LLC, the parent company of Fusion GPS, which contracted British ex-MI6 agent Christopher Steele to conduct political opposition research on Donald Trump and alleged links to Russia. The 35-page Steele dossier, which relied heavily on Russian disinformation, drove years of Russiagate conspiracy theories after publication by BuzzFeed in January 2017. Despite acknowledgement by FBI Director Comey that it contained “salacious and unverified” information, and admission by former FBI Deputy Director McCabe that the FBI could not “prove the accuracy” of the dossier, the agency used it as a central element of an ultimately successful Foreign Intelligence Surveillance Act (FISA) warrant application against Trump campaign advisor Carter Page.

This created the unprecedented (so far as we know) result of government surveillance of a major party political campaign, all of it based on then-unsupported and now-discredited gossip.

In December 2019, the DOJ Inspector General report on FISA abuse revealed “17 major errors and omissions” in the FISA warrant application against Page and noted that Steele’s primary source said that Steele had misrepresented and embellished information in the dossier.

In addition to TDIP, Fusion GPS also received funds from high-profile sources, including the Hillary Clinton campaign and Democratic National Committee through Marc Elias and Michael Sussman at the Perkins Coie law firm. Yet when Robert Mueller was asked about Fusion GPS during a House Judiciary Committee hearing in July 2019, his infamous and astounding response was, “I’m not familiar with that,” raising serious questions about his knowledge of and involvement in the Mueller Report, as well as his role in the investigation.

In a May 2018 letter about Senate testimony of Donald Trump Jr. and Christopher Steele, Senator Chuck Grassley (R-IA) revealed that Jones reportedly told the FBI that his Penn Quarter Group received approximately $50 million from “7–10 wealthy donors primarily in New York and California.”

The donors behind the $50 million campaign to falsely discredit a presidency as a puppet of foreign-influenced villains should probably be a matter of serious curiosity by the credulous media that swallowed the baseless conspiracy theories in the Steele dossier. But so far, the mainstream media silence has been deafening.

In addition to financing Fusion GPS, TDIP also produced and distributed its own “research” papers to the media and FBI investigators, helping to keep Russiagate alive for years.

The Brookings Institution. The Lawfare blog is a project of the Brookings Institution, a center-left think tank in Washington, DC. In fiscal year 2018, Brookings listed donations of $2 million and above from the Embassy of Qatar, Nike co-founder Philip Knight, and other billionaires. Google, Facebook, and Open Society Foundations gave between $100,000 and $250,000. Amazon.com donated between $50,000 and $99,999.

Former Washington Post editorial writer and Brookings Senior Fellow Ben Wittes is the co-founder and editor-in-chief. Lawfare has trafficked in conspiracy theories while thoroughly covering Trump-Russia investigations, related prosecutions, breaking news developments, and leaks. Early examples include a July 2016 post on Lawfare in which Wittes engaged in a “legal analysis” of whether Trump was a “Russian agent.” It concluded that the future president was probably a mere “useful idiot” of the Russians. Two years later, an August 2018 post examined seven different levels of potential collusion, including the possibility that the Russians have compromising information on the president. Wittes concluded there was no evidence to undermine theory, but also none to disprove it.

Then in May 2020, after the release of DOJ Inspector General Michael Horowitz’s report exposed the gossip behind the baseless conspiracy theories and after the conviction of Gen. Michael Flynn began to unravel under clouds of prosecutorial misconduct, the Lawfare blog produced a new argument. Hilariously, without a shred of self-awareness, Witte criticized President Trump and his supporters for being “obsessed” with the Russia probes and accusations that had been bombarding the administration for four years.

In the next installment of “Players in the Russia Collusion Hoax,” learn how activists weaponized the Muller Report, even though it debunked Trump-Russia collusion conspiracy theories.